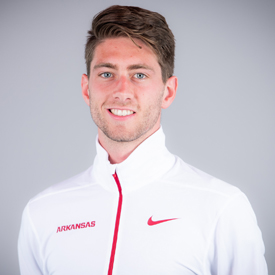 Junior (2017)
Opened up his third season with Arkansas at the Cowboy Preview (Sept. 1) finishing with the top time for the Razorbacks and coming in third overall completing the 5K course at 15:33.30 … In his second meet, he finished eighth overall and second for Arkansas at the Iona Meet of Champions (Sept. 15) … At the Chile Pepper Festival (Sept. 30) he finished as the fifth-best Razorback and in the top-20 overall … He competed at Pre-Nationals (Oct. 14) finishing 76th overall and third for Arkansas … Earned All-SEC first team recognition finishing seventh overall at the SEC Championships (Oct. 27) with a personal best time of 23:53.50 … Competed in the NCAA Cross Country Championships (Nov. 18) placing 86th overall and helping Arkansas come in fifth place overall.

Sophomore (2016)
Part of Arkansas’ top five in two meets this season as the third-best Razorback at the Battle in Beantown (Sept. 16) and the fifth-best Razorback at the Chile Pepper Festival (Oct. 1), during which he posted almost a one minute improvement in 8K with a 24:06.82 performance … Finished 78th overall at the Pre-National Invitational (Oct. 15) in Terre Haute, Indiana … Followed it up with a top-15 finish at the SEC Championship just one spot shy from all conference recognition … Completed his second year with an outstanding showing at the NCAA championship, placing 48th overall – eight spots shy of earning an All-American title.