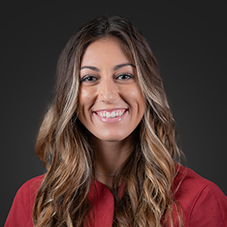 Made 33 appearances in her senior season as a full-time pinch runner … Scored 11 runs, including the walk-of run against Kentucky (March 31) to help Arkansas secure the series … Scored runs in four consecutive appearances during the Cowgirl Classic: McNeese (Feb. 8), Samford and Lipscomb (Feb. 9), and Campbell (Feb. 10).

Appeared in 39 games as a junior, primarily as a pinch runner … Scored 17 runs during the course of the season … Recorded one hit on one at bat against Deleware (Feb. 24), her only at bat of the season … Scored a season high two runs in a win against Marist (Feb. 23) … Scored one run in five-consecutive postseason games in which she appeared against Kentucky, Georgia and South Carolina at the SEC Tournament, and then against Depaul and Wichita State in the NCAA Fayetteville Regional.

Appeared in nine games—eight as a pinch hitter—with a start in right against Army West Point (Feb. 20)…delivered her first-career hit and run scored against the Black Knights…drew three walks on the year including a free pass in the season opener at Texas (Feb. 11).

Haizlip earned all-state honors following her sophomore and junior seasons for Midlothian High School in Texas and was twice named the District 7-5A Offensive Player of the Year. She was also twice selected to the Dallas Morning News All-Area Team. Entering her senior season, Haizlip carried a .502 batting average with 108 hits—56 of which went for extra bases—69 RBI and five home runs for the Panthers. She played travel ball for Texas Glory Gold.