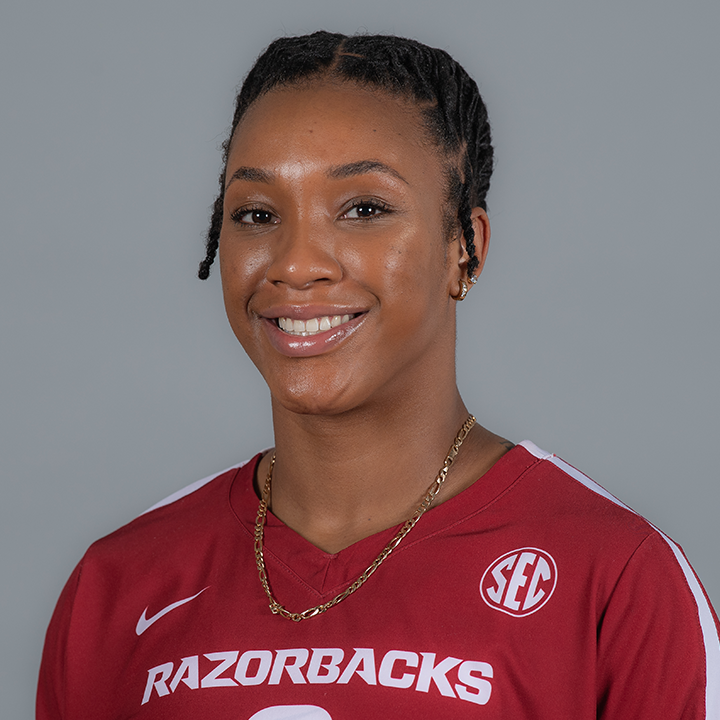 2018 | Sophomore
Appeared and started in all 28 matches…team-leader in total blocks with 95 and blocks per/set (.92)…recorded 231 kills for a 2.24 kills/set average and a .252 hitting percentage…made eight service aces and tied her career-high aces in a match with two against Buffalo (9/8).

2017 | Freshman
Started all 30 matches during her freshman campaign…averaged 2.02 kills per set and 2.50 points per set…22 matches with seven or more kills including eight matches in double figures…registered at least 10 kills coupled with a .300 or higher efficiency in seven matches…put down a season-high 12 kills in four matches, lastly in a four-set win at South Carolina (Nov. 12)…had 12 kills, three blocks and an ace in SEC debut against Tennessee (Sept. 20)…tallied at least four total blocks in 10 matches including a season-high seven blocks against No. 19 USC (Sept. 8) and Texas A&M (Nov. 5).

Before Arkansas
Pamphile was a four-year starter for Edgewater High School where she helped the Fighting Eagles to three district championships and four regional appearances, including a regional semifinal berth as a senior. Additionally, she was part of the EHS girl’s basketball state title team as a freshman and earned a pair of fifth-place state finishes in the shot put with the track and field team. Pamphile played club with OTVA in Orlando, Fla.

Personal
Elizabeth is the daughter of Hugues and Clunie Pamphile, with two older siblings, Olivier and Huggnie. Her parents were past members of the Haitian National Team in soccer and volleyball, respectively. Pamphile is planning to major in business economics at Arkansas.