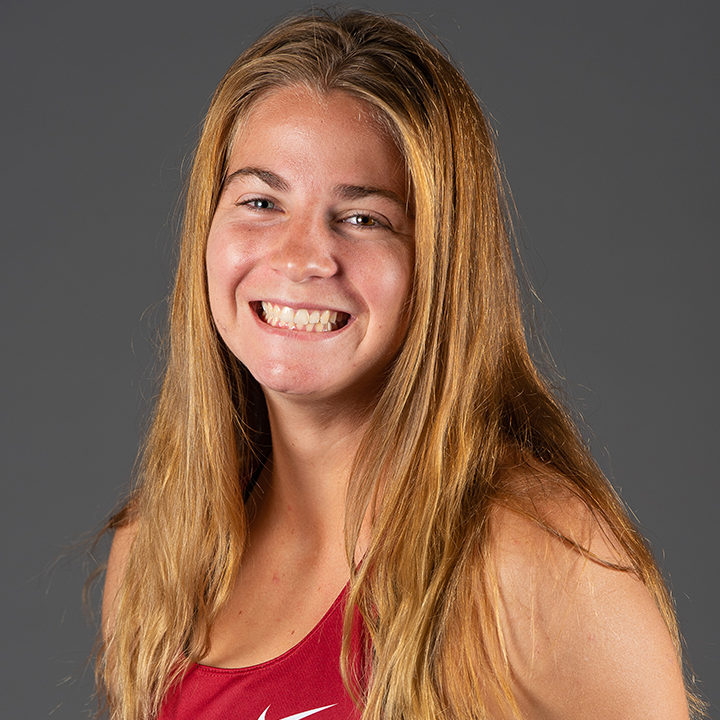 Jackie played exclusively at the no.2 doubles spot during the shortened 2020 spring season. She complied a total doubles record of 5-4 for the spring mainly with partner Martina Zerulo. Their doubles campaign was highlighted with a 6-3 win over Iamachkine and Olsen from the No.6 nationally ranked Pepperdine at the ITA National Indoor Kick off Weekend in Malibu, CA. Throughout the shortened 2019-20 season, Carr played singles predominantly at the No.3 spot for the Hogs. She made an appearance at the No.1 position with a victory over Alye Darter from Missouri State, as well as an appearance at the No.2 spot when she cruised past Nika Kozar 6-0 6-2 from no.45 Virginia Tech. In total, Jackie finished the spring with an overall 6-5 singles dual match record with other wins over Memphis, Arizona, Wichita State and UNLV. Jackie reached a singles high National ITA ranking of no.109 during the spring before the season was cancelled on March 12th by the SEC and NCAA due to concerns over the COVID-19 virus. Carr finished up the 2019-20 academic year very strong and was 1 of 2 Hogs on the roster to make the AD’s List. Carr was also named to the 2020 All-SEC Academic Honor Roll.

Jackie played the 2019 spring season predominantly at the No.5 and No.6 singles spots for the Razorbacks. She racked up a total dual match singles record of 9-7 for the Hogs and had big wins over Oklahoma State, OU, LSU, TAMU, Ole Miss, Mississippi State and Auburn. During the dual match vs No.9 Oklahoma State, Jackie clinched the deciding match for the Razorbacks in a dramatic three set battle against Catherine Gulihur 6-7 (5-7), 6-2, 6-4. Jackie finished the spring with a 5-7 singles record in conference play. Jackie had several doubles partners throughout the spring but found the most success partnering with freshman Laura Rijkers. Carr and Rijkers upset No.39 Nationally ranked duo of Toran Ribas and Malkia Ngounoue from No.8 Kansas 6-3. After their win over Ribas and Ngounoue, Carr and Rijkers made an appearance in the ITA National rankings at No.79 in the country. Jackie excelled in the classroom and was recognized with ITA All-Academic team honors.

Jackie and doubles partner Tatum Rice had a very successful fall campaign on the doubles court which saw them appear at No.50 in the ITA Doubles rankings during the 2017-18 the season. After only playing a handful of matches during the spring season at the no.6 position, Carr was a consistent contender at the no.6 position to finish the season at the SEC championships. Jackie grabbed a win vs Ellie Wright of Missouri in the first round of the tournament helping the Razorbacks advance to the next round where they would face off against sixth seed Auburn. The Hogs topped Auburn despite Jackie’s match remaining unfinished. The Hogs then took on third seed South Carolina in the Quarterfinals and Carr snagged a huge point for the team when she defeated Silvia Chinellato 6-4, 3-6, 6-4 at the no.6 spot to advance the Razorbacks to the Semi-finals for the first time in 10 years.

Signed with Marshall in November 2014 and joined the Herd for the 2015-16 season, she competed in the fall of 2015 before missing the 2016 season due to illness…. transferred to Arkansas over the summer of 2016.

Prior To Arkansas
Was a tennis star for Laurel Springs in her home state of Arkansas, earning a five-star rating from TennisRecruiting.net … Won numerous national titles in tennis, including the USTA National Open in both singles and doubles in 2014 … Was rated the top Junior Player in Arkansas after winning the state qualifier for three consecutive years … Has been ranked as high as 15th in the nation by the USTA and ranked as high as 26th by TennisRecruiting.net and 73rd in her class.

Jackie is daughter to Julie and Jack Carr who reside in Rogers, AR. She has an older Brother Joshua who also resides in NWA with his wife and children. Jackie received her BA in Finance in 2019 and completed her BA in Accounting in 2020. Jackie will continue her graduate studies at Arkansas while she finishes her remaining year of eligibility. Besides tennis and her academics, Jackie enjoys writing and baking in her free time.