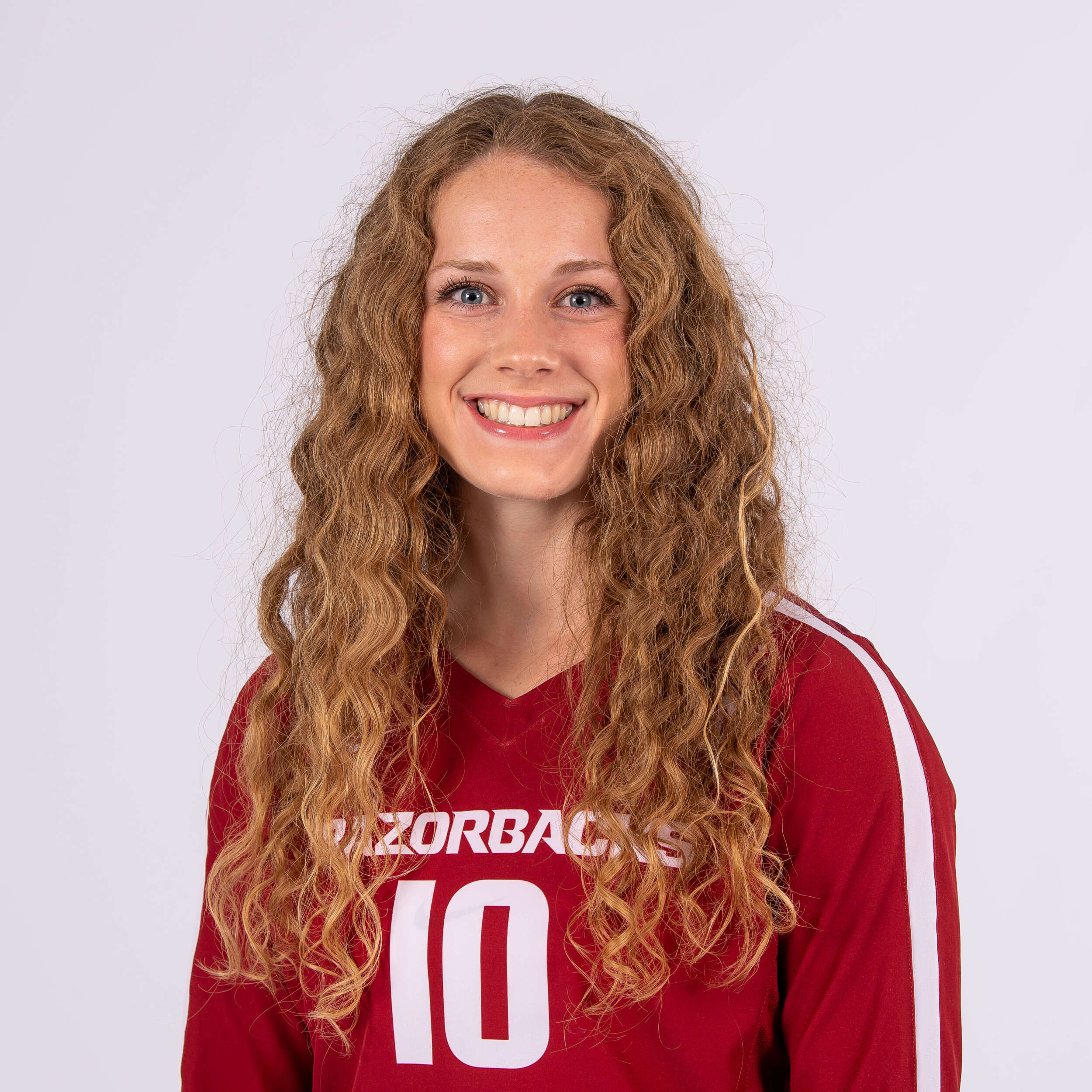 2021 | Junior
AVCA All-South Region Team Selection, All-SEC Team Selection, SEC Scholar-Athlete of the Year for the second consecutive season… led the Hogs with 4.12 kills per set (470 total), second in the SEC… became the 17th member of the Arkansas 1,000 kill club when she registered the 1,000th of her career on Oct. 9 at home against Auburn… now has 1,216 total, good for 13th in program history… currently sits in fifth in kills per set in all-time program history with 3.92 and third in the rally to 25 scoring era… led Arkansas in kills in 21 matches on the season and had 10+ in all but four matches… led Arkansas in solo blocks on the season with 14, which included a team season high of three against Georgia (Oct. 2)… had eight double-doubles on the season, which included a season-high dig count of 17 at Auburn (Oct. 10)… tallied a new career high in kills of 33 at Utah State, which also ties for fourth in Arkansas history for single match kills… set a new career high match hitting percentage of .438 against Louisiana Tech (Aug. 28)… her 1,369 come in ninth in program history for the most in a season

2020 | Sophomore
AVCA All-South Region Team Selection, All-SEC Team Selection, SEC Scholar-Athlete of the Year… led Arkansas with 3.88 kills per set, 5th in the SEC… recorded 0.46 service aces per set, leading the Razorbacks and 2nd in the SEC… one of five SEC players with 10+ double-doubles… four matches with 20+ kills including a season-high 22 at Georgia (Feb. 4)… owned Arkansas’ top seven kill performances on the season… led the Hogs in kills in 16 of 22 matches… registered a season-best hitting percentage of .410 (20-4-39) vs Tennessee (March 14)… had a career-high four blocks at LSU (Feb. 19) and a career-best five aces vs Alabama (Feb. 13).

2019 | Freshman
SEC All-Freshman Team selection… Week 1 and Week 13 Freshman of the Week… Arkansas Classic MVP… started in all 30 matches and appeared in all 113 sets… playing all six rotations, Gillen led the Razorbacks in kills, kills per set, service aces, total digs, points, and total receptions… averaged 3.74 kills per set (423 total kills) and 3.87 kills per set against SEC opponents (263 total kills)… led the Razorbacks in kills 23 times, recording 18 double-digit kill performances and eight with 20+ kills… recorded a season-high and team-best 31 kills vs Ole Miss (Nov. 22)… finished with a team-high nine double-doubles… ranked first among SEC freshman in kills per set, seventh overall… only SEC player with three performances of 28 kills or more and only SEC player with a performance of 20+ kills and 20+ digs (only the second 20-20 performance by a Razorback since 2010)… ranked 8th among freshmen in Division I for kills per set, 81st overall… ranked 4th among freshmen in Division I for attacks, 53rd overall… first freshman in Arkansas history to log three 28+ kills performances in a single season (Joins only 21 other Razorbacks who have ever logged a 25+ kill performance)… 31 kills vs Ole Miss ties for 8th most kills in a single match & her 84 attempts is the most in a single match in Arkansas history… Gillen’s 34.5 points vs Ole Miss is the most by an SEC player in a single match this season.

Prep
A two-time conference champion at The Barstow School, Gillen was named MVP, All-Conference, and All-District all four years in high school. She was also named Conference Player of the Year and selected to the All-Star Team her senior year. She achieved 1,000 kills during her junior year and had a career-best 30 kills in a game her senior year. In addition to her accolades at the prep level, she was named to the 2018 Prep Volleyball Senior Aces List.

Personal
Jillian is the daughter of John and Kady Gillen, and has two older brothers, Jay and Jared. Her father played basketball at UMKC, her mother played volleyball at Morehead State, and Jared plays baseball at Swarthmore College. Gillen intends to major in business.