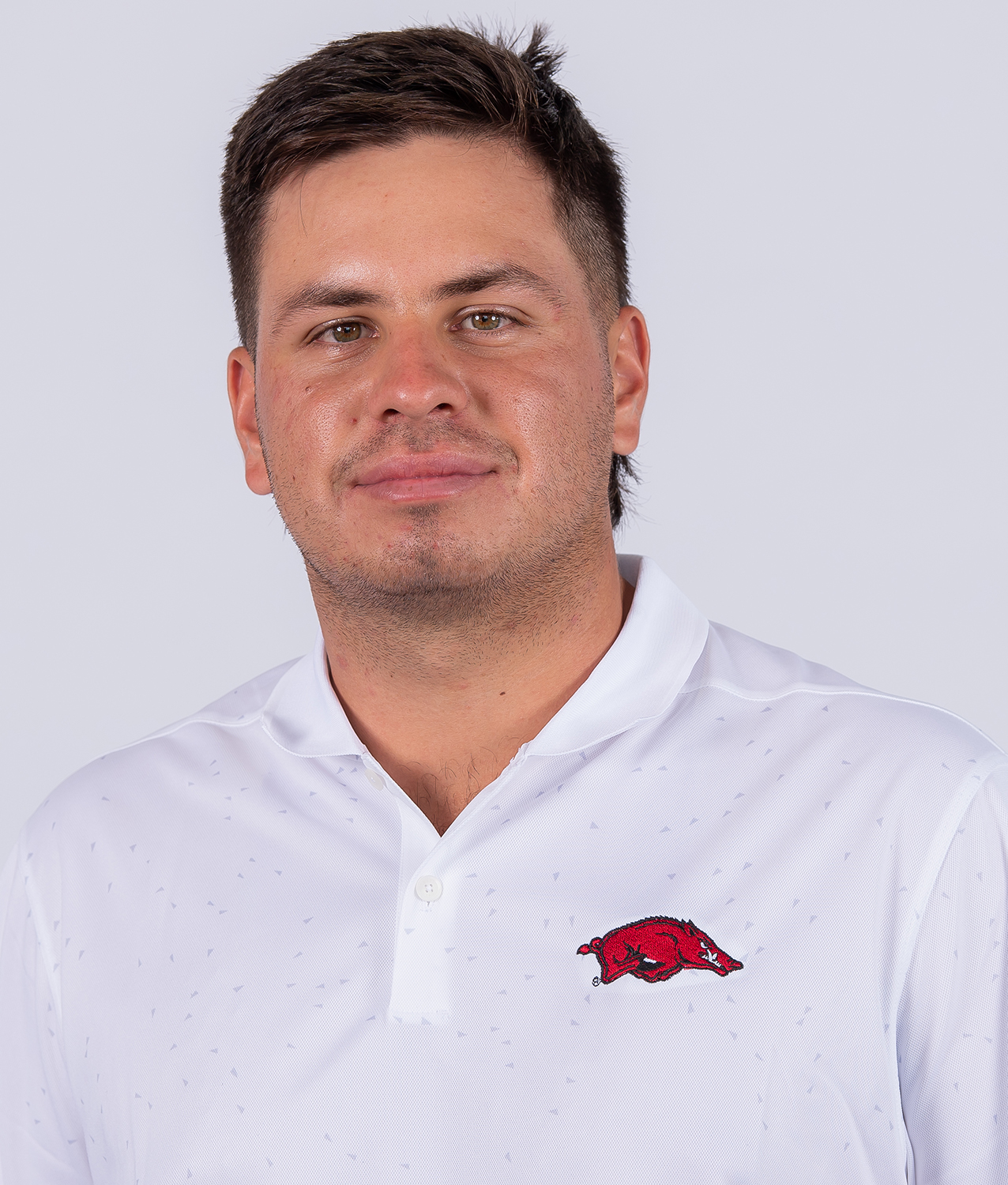 » 2021 Arnold Palmer Cup selection (Team International – Peru) … The first player from Peru ever selected for the Palmer Cup and just the third South American.
» Three-time PING All-Central Region, the 6th Razorback to be honored at least three times
» Two-time All-SEC (2019 and 2020) and SEC All-Freshman Team (2018)
» Played in three Latin America Amateurs (2018, 2019 and 2020) and two U.S. Amateurs (2020 and 2021)
» Currently owns the school career scoring record and has led the team in scoring in each of his three seasons
» Has represented his native Peru four times at the Latin America Amateur Championship with finishes of fourth, sixth, 13th and 25th
» Owns the Blessings Golf Club course record, shooting a 64 from the championship tees on August 3, 2020.

As a Sophomore (2019-20)
» PING All-Central Region
» First Team All-SEC
» SEC Spring Academic Honor Roll
Voted PING All-Central Region for the second straight year. Earned first team All-SEC … Added SEC Spring Academic Honor Roll honors … His season scoring average of 70.38 is an Arkansas record … Led the team in scoring average for a second-straight year … Ranked 60th on the Golfweek Power Ranking and 95th on the Golf Stat ranking … In eight events, had a team-best three top 5’s and a team-best 10 rounds in the 60’s, which ranks fifth-best on the school’s single-season list, prior to the season being canceled Mar. 12, 2020 due to COVID-19 … Also led the team in being low man for a round (10), low man for an event (4) and having 23 of his 24 rounds count toward the team total … Had 16 birdies at an event three times … Was runner-up at the Carmel Cup, shooting a 13-under 203 (68-68-67) … The 203, 54-hole score ranks sixth-best in school history while his 13-under-par ties his career-best and ties for third-best in the Razorback record book … Tied for fourth at White Sands Intercollegiate, carding a 10-under 206 (67-69-70) … Also tied for fourth at the Cabo Collegiate, turning in a 5-under-par 208 (69-70-69) … Lead most of the final round at Cabo thanks to a double eagle on the 550-yard, par 5 16th hole in the final round – hit driver and 50-degree wedge from 140 yards out to hole out for the albatross  … INDIVIDUAL: Had rounds of 69-75-70 to tie for 26th at the Sun Bowl All-America … Shot a final-round 69 to tie for sixth at the Latin America Amateur Championship (76-79-72-69) … Earned exemption to play in the 2020 U.S. Amateur Championship.

High School
As of August 2018, ranked No. 9 in the country by the American Junior Golf Association (AJGA) and checked in at No. 133 in the World Amateur Golf Ranking … Attended Montverde Academy in Florida and played his prep career for Bishops Gate Golf Academy, was selected to play on the Toyota Junior World Cup Team and earned AJGA All-America honorable mention honors following his junior season … Tied for 13th, thanks to shooting 67-68 in the final two rounds, at the 2018 Latin American Amateur Championship … Finished 33rd at the 2018 U.S. Junior Amateur … Won two pro events in Peru … Recorded an AJGA victory by winning the Simplify Boys Invitational (11-under par, 205) as well as finishing runner-up at The Major Champions Invitational (64-70-71) … Named the Bishops Gate Golf Academy Player of the Year as he also won the IMG Academy Junior World Championship and the AJGA Memorial Junior … Won the South American Championship in Brazil and the Mitsubishi Pro Championship in Peru … At the 2017 Latin American Amateur Championship, Perico missed the playoff by one stroke, finishing in fourth place overall … Shot an opening-round 64 to hold the lead and set the record for the lowest round in LAAC tournament history … In addition, he was the youngest player in the field when he set the mark … As a sophomore, Perico won the Match Play Championship Peru while finishing runner-up at the South American Junior Championship, the Faldo Series South American Junior Championship, the Hurricane Junior Annual Academy Tournament and the Golfweek Junior Tournament … Was also the low amateur at the PGA Latin America Lexus Open.