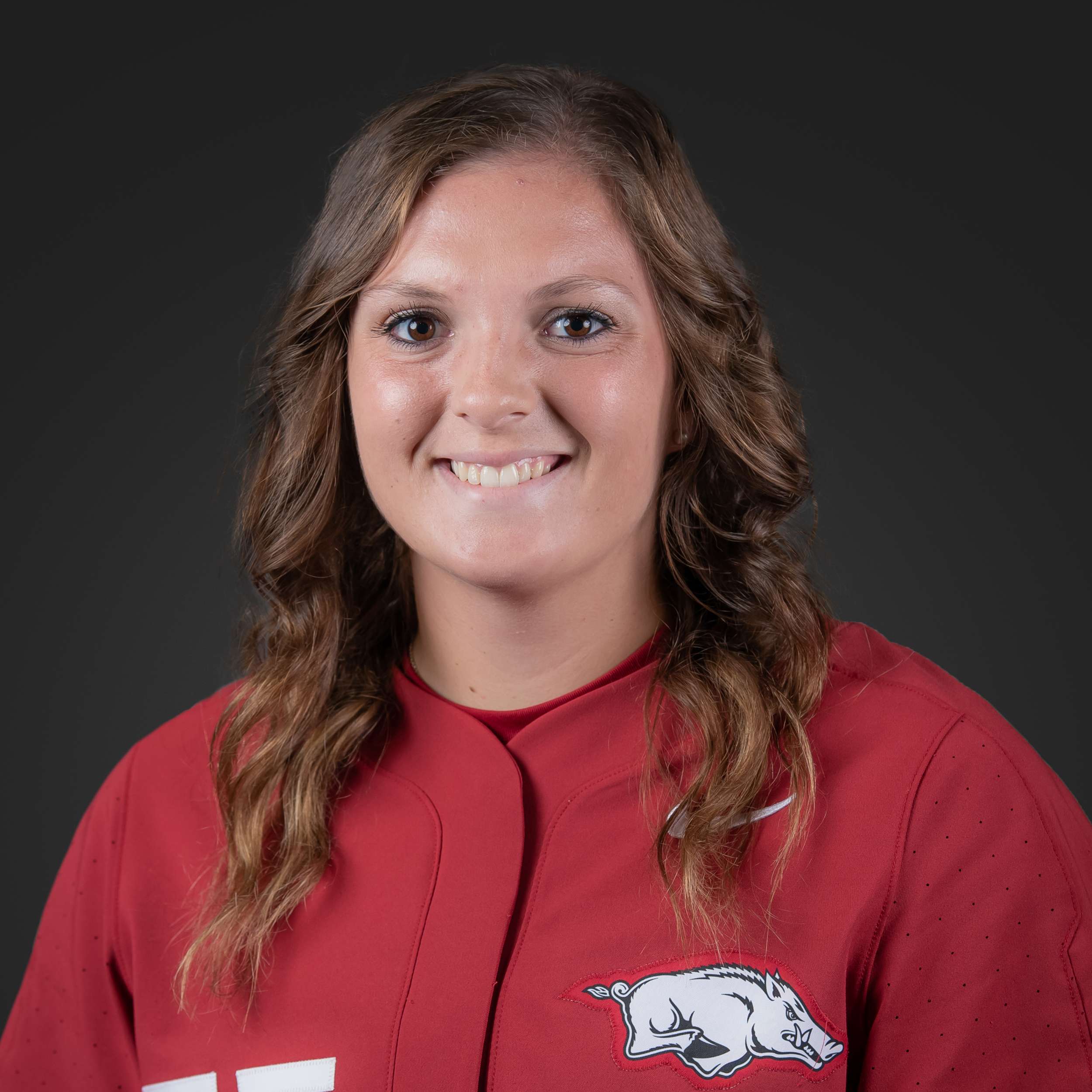 One of two Razorbacks to start in all 58 games … Played the entire season in right field, recorded 22 putouts … In 173 at bats, she rallied off 55 hits, 21 for extra bases with 10 home runs … Had 10 multiple-hit performances and 11 multiple-RBI finishes … She hit a game-winning home run twice in 2019 against Tennessee (March 23) and Texas A&M (April 28) … Hit a walk-off double in game three vs Kentucky (March 31) to help Arkansas secure the series with a 3-2 victory … Closed out her senior season with her best offense year to date, batting .318 at the plate, building a .389 on base percentage, batting in 37 Razorbacks and scoring 26 runs herself … In the Circle: Pitched 3.0 innings of relief, striking out one and giving up five hits.

Started 41 games in 45 appearances including five appearances in the circle … In the Circle: Pitched 6.1 innings of relief in 2018 … Had two scoreless relief appearances, pitching 1.0 innings against Deleware, allowing no runs on no hits with a walk, and 0.2 innings against Auburn (April 20) … As a hitter: Had a season high four hits against Iowa State (March 16) that included two runs and four RBI with two homers … Ended the season with eight home runs in seven games … Had five multi-RBI games and ended the year with 25 … Had nine multi hit performances … Hit .304 on the year and slugged .560 with a .362 on base percentage.

Appeared in 36 games overall with 14 appearances in the circle…earned her first win in a scoreless relief appearance (4.2 IP, 2 K, 0 H) against Memphis (Feb. 25)…also hit a two-run shot in that game…matched season-long outing with 4.2 innings in a home win against Lamar (March 4)…pitched three innings of scoreless relief in a 5-4 win at Mississippi State (April 23)…went 2-for-3 with three RBIs on opening day at North Texas (Feb. 11)…tied for fourth on the team with six home runs including game-tying solo shot against No. 23 Tulsa (May 19) during the NCAA Norman Regional.

On the heels of a standout freshman season at UT Martin, Warrick earned spots on the 2016 All-Ohio Valley Conference Second and All-Newcomer teams. She led the Skyhawks with 10 home runs and 41 RBIs, categories in which she was tied for first and second in the OVC, respectively. Warrick was third on the team with a .299 batting average and played in all 56 games. The utility standout also picked up three wins, three complete games and a save in 45.2 innings of work as part of the UT Martin pitching staff. Warrick was a MaxPreps All-American at Forrest High School in Tennessee where she was instrumental in the team’s run to the 2015 TSSAA Class A state title. As a senior for the Lady Rockets, she bolstered the team’s lineup with a .594 batting average and 14 home runs. She was as impressive in the circle with 32 victories. Warrick hit a school-record 51 home runs during her prep career.