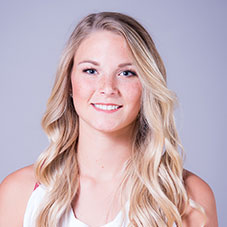 AS A SOPHOMORE (2016-17)
Played in all 30 games as a sophomore … Career-best 23 points on 6-for-8 shooting in win over Houston Baptist … First start of the season verses HBU … Twenty-two games with 20+ minutes … Career-best nine rebounds against Northwestern State … Repeated with nine boards at Alabama … Twelve double figure scoring games … Also throws javelin for the Razorback track and field team … Twelve games in double-figure scoring … Led Arkansas in scoring with 13 (tied two other players) against Louisiana and again with 19 at Ole Miss … Second on the team with 31 3-pointers made … Ranked third in 2016-17 with 8.0 points per game – up from 2.7 ppg as a freshman.

PERSONAL
Born Sept. 2, 1996 to Eric and Dodie Swenson … Has two siblings, Kameron and Konner … Competed with the Razorback women’s track and field team throwing the javelin as a freshman … Majoring in accounting at Arkansas.