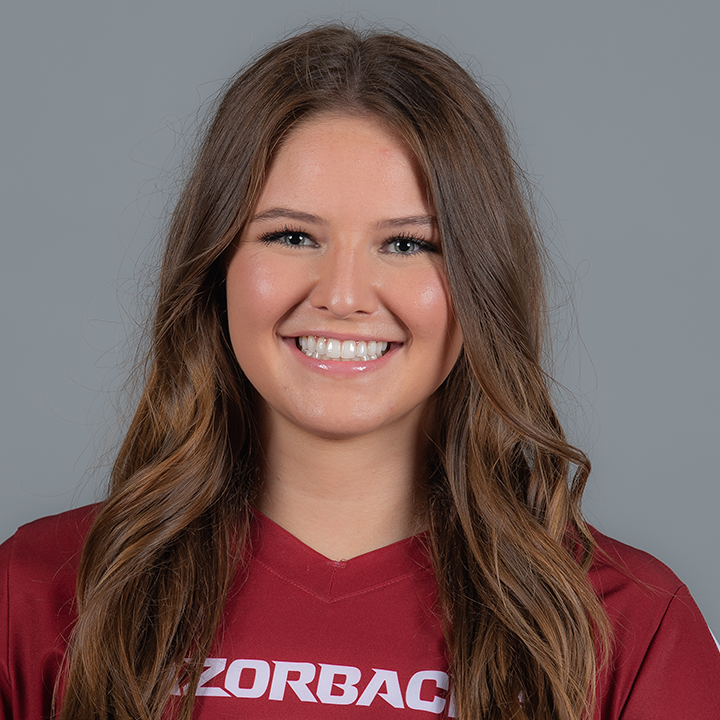 2020 | Junior
Started in all 22 matches, playing in all 83 sets for the Hogs as the primary libero… recorded double-digit digs in 16 matches, including a career-high 21 digs in the season-opener at Mississippi State (Oct. 17)… increased her total-dig count for the third-straight season with 264 digs and 3.18 digs per set… dominant on the serve line with 64 aces and .29 aces per set… earned SEC Defensive Player of the Week after Arkansas’ sweep of Georgia (Week 8).

2019 | Sophomore
Appeared in 24 matches with 11 starts… more than doubled her digs from her freshman campaign and tripled her assists with 175 digs and 23 assists… Now has 44 total service aces after 23 in 2019… had four service aces two times: at Maryland (Sept. 13) and at Florida (Nov. 27)… had at least one ace in the final nine of eleven matches for Arkansas… recorded double-digit digs nine times…. currently first in program history for aces/set (0.32).

2018 | Freshman
Appeared in 22 matches with five starts…recorded 21 service aces to tie for first on the team…holds a 0.34 aces/set average to rank sixth in the SEC…ranks third in program history for aces/set…had a career-high and team-leading five aces against Missouri (Sept. 23)…recorded 144 receptions for a .910 reception percentage…made 72 digs for a 1.18 digs/set average.

Prior to Arkansas
Evans capped her standout prep career with All-State and District 8-5A MVP honors after leading Colleyville Heritage High School to the regional final round of the 5A state playoffs. During her senior season, she tallied 658 kills while hitting .375 to go along with 350 digs and 88 aces. Overall, Evans amassed 1,788 kills, 1,038 digs and 199 services aces in her career at Colleyville Heritage. A four-time all-district performer, Evans began her prep career as the District 7-6A Newcomer of the Year and was named the District 8-5A Utility Player of the Year following her junior campaign. She played club volleyball with Skyline Juniors.

Personal
Lauren is the daughter of Lane and Jennifer Evans and has an older sister, Morgan. She plans to major in marketing during her career at Arkansas.