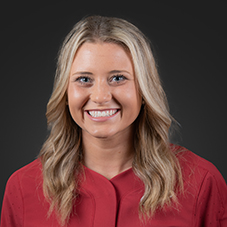 Earned a spot in the lineup as the starting shortstop, kicking off her career with a nine-game hitting streak … Was injured against Washington (Feb. 14) and appeared in her final game against Kentucky (March 29) as a pinch runner … Finished with a .283 average at the plate in 27 appearances and 23 starts, recording 15 hits and 11 RBI … Hit her first collegiate home run against NDSU (Feb. 14) …. On defense, she recorded 29 putouts and 42 assists, including a season-high six assists in the season opener versus Campbell (Feb. 8).

Prior to Arkansas
Awarded the 2018 Softball Player of the Year award from the Arkansas Activities Association … Hit .506 with nine home runs, 31 RBIs with 14 stolen bases during her senior campaign … Named the 2017 MaxPreps State Player of the year after hitting .436 wit 11 homers and 24 RBIs her junior season …  Led the Sheridan (Ark.) High School Yellowjackets to their third-consecutive 6A state title including an astounding 30-3 record in 2018 … Named the MVP of the state tournament following the team’s championship run in 2017.

Personal
Hicks is the daughter of Byron and Kristi Hicks and has an older brother, Max. Both of her parents attended the University of Arkansas.