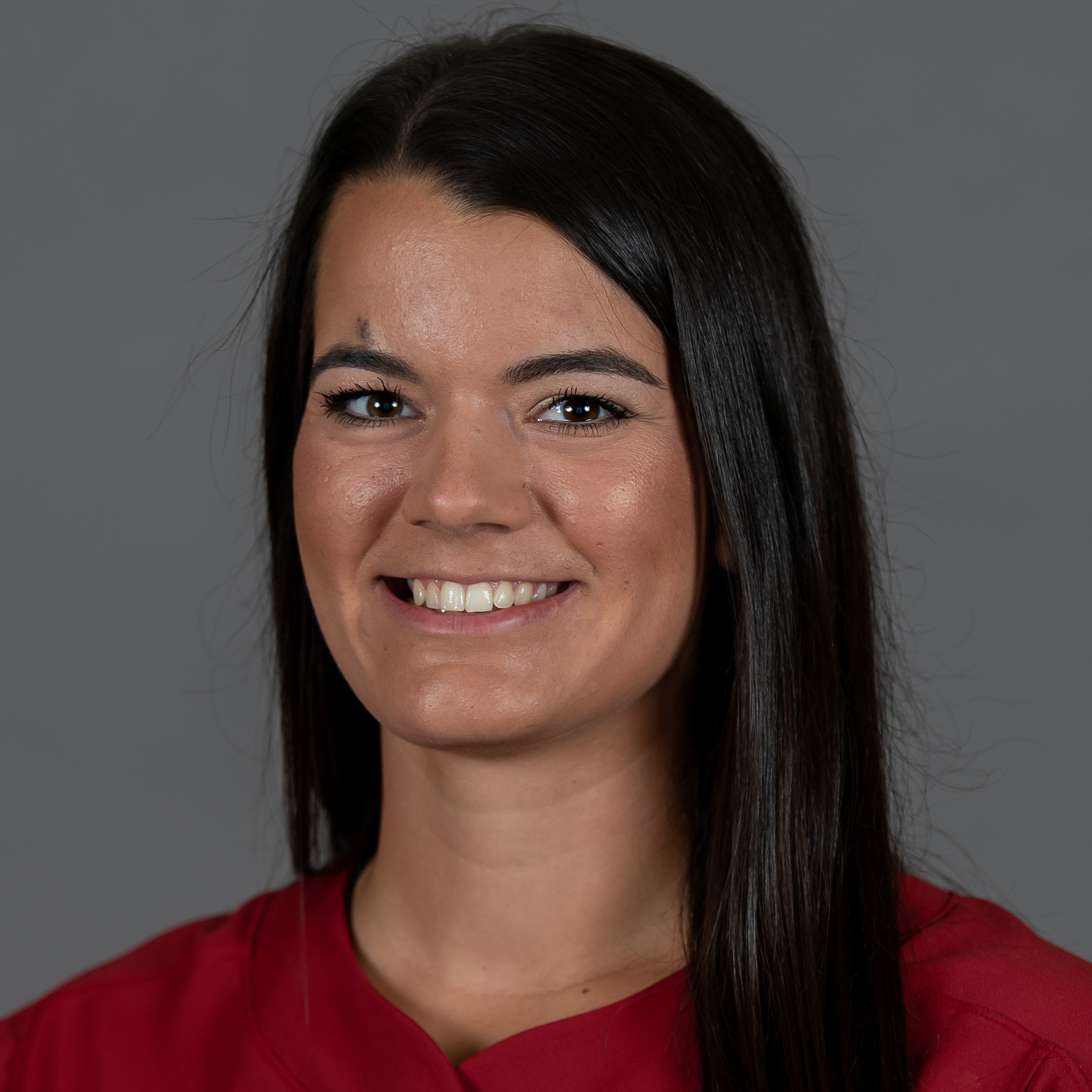 2021 | Redshirt Junior
NFCA First Team All-American … SEC Co-Pitcher of the Year … All-SEC First Team … USA Softball Player of the Year Top 10 Finalist … NFCA First Team All-South Region … Two-time SEC Pitcher of the Week … Appeared in 40 games and made 25 starts, going 26-7 and earning five saves, with a 1.55 ERA (198.1 IP/44 ER) … Totaled 54 runs allowed, 138 hits allowed (33 XBH), 198 strikeouts, 39 walks, 12 hit batsman and a .192 opponent batting average … First Arkansas pitcher to earn First Team All-American honors … First pitcher in Razorback history to earn SEC Pitcher of the Year honors … Ranked first in league-only games in wins (11), saves (4) and appearances (19) and fourth in strikeouts (79) and fourth in ERA (2.01) among pitchers who threw at least 80.0 innings … Nationally, placed seventh in wins (26) and saves (5), 30th in strikeouts and 36th in ERA … Tied the school single-season record in saves … In relief went 9-0 in 15 appearances with a 0.72 ERA (48.1 IP/5 ER) and 50 strikeouts … Started the season opener, pitching 3.0 innings, her shortest start of the year, and allowed four runs (one earned) on four hits and one walk with five strikeouts against Oklahoma State (Feb. 11) … Turned in the longest relief outing of her career, firing 8.2 innings of scoreless relief, allowing six hits and four walks with nine strikeouts in a 6-4, 14 inning win at McNeese (Feb. 20, Game 1), the second longest game in program history … Threw first complete game of the season, going 7.0 innings and allowing two runs on three hits with seven strikeouts in a win over nationally ranked Baylor (Feb. 21) … Was one pitch away from an immaculate inning against the Lady Bears and retired the last 11 batters faced … During the Cowgirl Classic (Feb. 20-21) went 3-0 over 19.2 innings with 18 strikeouts, all in under 24 hours … Earned first save of the season, retiring one batter at UTA (Feb. 22) … Earned first complete game shutout against North Dakota State (Feb. 25, Game 1), throwing 7.0 innings, allowing two hits with 10 strikeouts … Threw second no-hitter of her career and struck out six over 5.0 innings against Texas Tech (Feb. 26), and was one error away from a perfect game … Surrendered only one hit in 4.0 innings against Northwestern State (March 6) … Set a season-high of 11 strikeouts and also allowed a season-high eight hits in 7.0 innings at Central Arkansas (March 9) … Recorded last of three double digit strikeout performances, fanning 10 at South Carolina (March 12), allowing one run on six hits over 7.0 innings in the SEC opener … Became the program’s all-time leader notching her 10th career save by firing 2.2 innings of scoreless relief at South Carolina (March 14) … Threw the most innings of her career by tossing 10.0 innings and surrendering two runs in a loss to Liberty (March 16) … Did not allow an earned run on seven hits with four strikeouts against Ole Miss (March 19) … Threw a complete game shutout at LSU (May 1), surrendering only four hits with four strikeouts in 7.0 innings … Was inside the circle, earning the relief win by firing 3.1 scoreless innings at LSU (May 3, Game 2) to capture the program’s first SEC title … Was the tough luck loser in the SEC Tournament against Tennessee (May 13), allowing one run (via a home run) on two hits with five strikeouts in a 1-0 setback … During the NCAA Tournament Regionals, did not allow a run and went 3-0, throwing 17.0 innings … Threw a 5.0 inning complete game shutout against Manhattan (May 21) and worked 6.0 innings with five strikeouts against South Dakota State (May 22) … Was inside the circle for the regional championship, throwing 6.0 scoreless relief innings, allowing five hits with three strikeouts to earn the win against Stanford (May 23) … During the NCAA Tournament went 3-1 with a 1.31 ERA (21.1 IP/4 ER), 18 strikeouts and four walks.

2019 | Sophomore
Finished the season with a 18-11 record and 1.88 ERA… Started 26 games and made 41 appearances, including 11 complete games… Recorded seven shutouts and three one-hitter performances… Held hitters to a .190 batting average while in the circle… Allowed only 32 walks in 160 innings pitched, while posting 180 strikeouts… Started the season throwing 20 consecutive innings without allowing a run… Recorded a career-high and tied the program single-game record with 16 strikeouts in 7.2 innings against Furman (April 14)… Posted five 10+ strikeout performances… Stands as the current leader in strikeouts per seven innings in a career (8.04)… Earned five saves, her fifth coming against Auburn (May 5) to help Arkansas complete the series sweep, tied for most saves in a season in school history…Has the lowest opponent batting average in a career at Arkansas (.172) as the only pitcher with an average less than .200.

2018 | Freshman
Posted a 29-7 record on a 1.51 ERA as a freshman (29 wins is a single-season program best)… Started 31 games and made 45 appearances… Threw 19 complete games … Threw the seventh no-hitter in program history in a 9-0 win over Northern Colorado (March 2)… Registered seven additional one-hitters throughout the course of the season… Held hitters to a .157 batting average while in the circle… Allowed just 44 walks in 213.1 innings pitched while posting 249 strikeouts… Had 12 outings in which she posted seven or more strikeouts coupled with one or fewer walks… Tallied three victories without allowing a run in 18.2 innings, including a pair of complete-game shutouts over DePaul (May 18) and Wichita State (May 19) in the NCAA Fayetteville Regional.

Prior to Arkansas
Capped her standout prep career with a 14-2 season in the circle to go along with a 0.58 ERA, 225 strikeouts and just 28 walks on her way to Premier Girls Fastpitch (PGF) All-Southeast Region honors… During her career at Lake Region (Fla.) High School, she registered a 49-9 record with a 0.72 ERA and 619 strikeouts… Helped Lake Region to a pair of state runner-up finishes and four district championships… two-time Florida Athletic Coaches Association 7A Softball Player of the Year… Ranked as high as No. 47 in the FloSoftball Top 100… Played travel ball for the Rhode Island Thunder.

Personal
Daughter of Ron and Tula Haff… Has a brother, Drake… Majoring in Biochemistry.