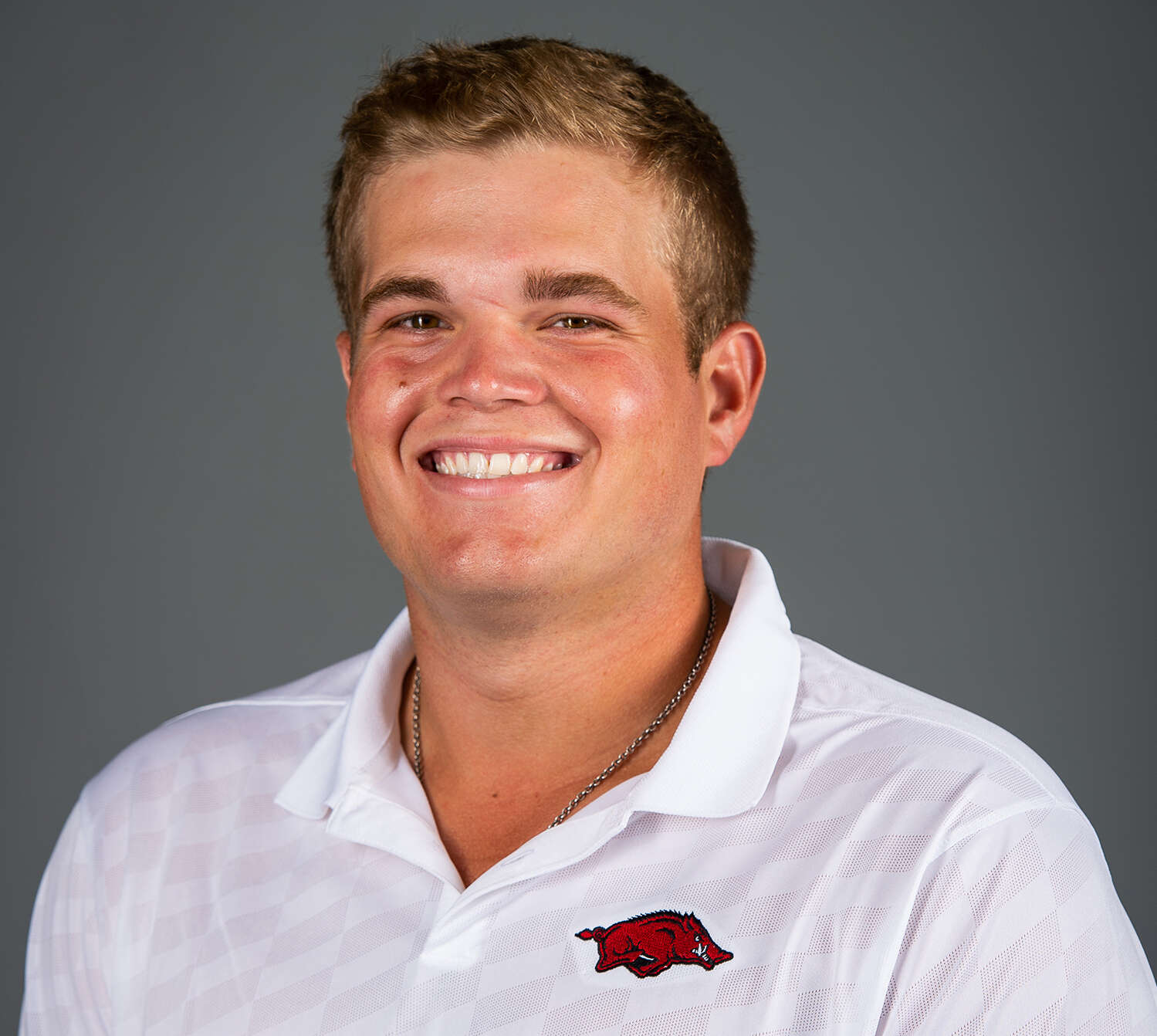 – Graduated in the spring of 2020 with a degree in business finance and a GPA of 3.89 … Was granted an extra year of eligibility by the NCAA due to the COVID-19 pandemic that cut the 2019-20 season short … Arkansas’ McWhorter Award nominee and received a $10,000 post-graduate scholarship from the SEC … In 10 career semesters at Arkansas, earned Chancellor’s List (4.0 semester GPA) seven times and Dean’s List (3.75-3.99 GPA) three times.

– Qualified for the 2020 MacKenzie Tour of PGA Canada (Mar. 13) as he shot a 4-under-par 284 to finish in a tie for seventh in the Q-School USA East 2 … Had a hole-in-one on the par 3 17th in round three, carded a 2-under-par 70 in rounds one and two and shot an even-par 72 in rounds three and four to secure being fully exempt for the first six Tour events.

As a Graduate Senior (2020-21)
Ranked third on the team with a 72.09 scoring average (8 events, 22 rounds) … Shot 67 three times, including the final round at Vanderbilt Legends Collegiate, opening round of the Individual Spring Kickoff and final round of the Gators Invitational … Finished par or better for 54 holes in each of his first four events played … Carded a 1-under-par score of 212 (72-73-67) at Vanderbilt … Was runner-up at the Individual Spring Kickoff (Irving, Texas) shooting an even=par 142 (67-75) … Also shot even par at the Jerry Pate National (70-69-71=210) and the Gators Invitational (73-71-67=210) … Served as an alternate at the SEC, NCAA Regional and NCAA Championship … Subbed in the final two rounds at the NCAA Championship and posted counting scores of 73-74 … Chipped in for birdie on his second-to-last hole to help the Razorbacks finish T-11.

As a Senior (2019-20)
» CoSIDA Academic All-American (third team)
» GCAA Srixon/Cleveland Golf All-America Scholar
» SEC Men’s Golf Scholar-Athlete of the Year
» CoSIDA Academic All-District
» SEC Spring Academic Honor Roll
» Arkansas’ male nominee for the SEC’s H. Boyd McWhorter Scholar-Athlete Post-Graduate Scholarship
For the second straight year, named SEC Scholar-Athlete of the Year while adding CoSIDA Academic All-America third team honors and being named a GCAA All-America Scholar … Played in all eight events and his scoring average of 71.46 ranks seventh on the school’s single-season list prior to the season being canceled on Mar. 12, 2020 due to COVID-19 … 20 of hs 24 rounds counted to toward the team score and he was the low man for a round eight times … Had an impressive final-round scoring average of 69.3 as five of his eight final rounds were in the 60’s … Shot 66 three times, including final-round 66’s at the Carmel Cup, White Sands Invitational and Sea Best Invitational … Opened the season with an 11-under-par 205 (68-71-66) to tie for third at the Carmel Cup thanks to two eagles, 11 birdies and 38 pars … Fired a 2-under 211 (72-73-66) to tie for 11th at the Bearcat Invitational, helping the team finish second … Posted season-high, 12 birdies at both White Sands Invitational and the Cabo Collegiate … Finished 3-under and T25th at White Sands … Earned Dean’s List in the Fall of 2019 and President’s List in Spring of 2020 … INDIVIDUAL: During the winter break, tied for third at the Sun Bowl All-America Classic (67-69-69=205) and was runner-up a the Patriot All-America (67-67-68=203) … Qualified for the 2020 MacKenzie Tour of PGA Canada.

As a Sophomore (2017-18)
» PING All-Region Team
» SEC Spring Academic Honor Roll
Posted five, top-10 finishes and a total of seven top 20 finishes in 14 events to earn PING All-Central Region honors … Posted 143 birdies for the season to rank second on the school’s single-season list … Finished his 2017-18 season second on the team with a 71.52 stroke average … Shot 65 four times, including once in his opening round of the season (Carmel Cup), twice in one event (Jerry Pate) and once at Sea Best … Opened the season with four top-20 finishes … Posted a runner-up finish at the Gopher Invitational at 7- under par (72-67-67=206) to help lead Arkansas to a tournament victory … Followed that by shooting 8-under par to tie for sixth at the Bearcat Invitational, shooting 67-70-68 for a 54-hole score of 205 … Earned his first collegiate win as he was co-medalist at the Jerry Pate Intercollegiate with rounds of 65-65-70 for a career-best 10-under par 200 … The 200 was also the second-best, 54-hole score in school history … Opened the spring portion of the schedule with T-8th at the Sea Best Invitational, recording his fourth 65 of the season … Shot a 66 in the final round of the SEC Championship to shoot a 1-over par 211 and tie for 16th … Each of his last 16 rounds of the season counted toward the team score, including the NCAA Norman Regional and NCAA Championship … Recorded six eagles and 18 rounds of par or better with 143 birdies and 451 par holes … Team low-man in two tournaments and eleven rounds … Named to the SEC Spring Academic Honor Roll recognition … Earned Dean’s List in the Fall of 2017 and Chancellor’s List in the Spring of 2018.

As a Freshman (2016-17)
» PING All-America honorable mention
» NCAA Championship runner-up
» First-Year SEC Academic Honor Roll
Was runner-up at the NCAA National Championship as an individual after rounds of 70-68-72-71 – 281 (-7) … Earned PING All-America honorable mention honors from the Golf Coaches Association of America (GCAA) … Became the second player in school history to finish inside the top five at the National Championship … Shot a combined 5-under in three postseason events, finishing T-13th at the SEC Championship, sixth at NCAA Regionals and second at the NCAA National Championship … Finished the year with five of his final eight rounds under par … Capped his rookie season with a 73.0 stroke average that included 10 rounds under par and five top-20 finishes … Finished even-par at the SEC Championship with a final-round, 4-under 66 to become the first freshman in program history to finish even par at the conference championship … Paced the team with 149 birdies and 465 pars on the year … Posted a counting score in 28 of 31 rounds and was the team low-man in three tournaments and six rounds … named to the 2016-17 First-Year SEC Academic Honor Roll … Finished T-14th at the Western Amateur Championship during the summer of 2017 and won four straight matches at the 2017 Oklahoma Golf Association State Amateur Championship to earn a spot in the semifinal round … Earned Chancellor’s List in the Fall of 2016 and Spring of 2017.

High School
Attended Kingfisher High School in Kingfisher, Oklahoma … is a two-time Oklahoma high school state champion (2013 – 2A, 2015 – 3A) … named the Oklahoman’s 2015 All-City Golfer of the Year … won nine of 11 tournaments as a junior with a 69.4 stroke average … is the only player to ever win the Texas/Oklahoma Junior Championship three times (2013, 14, 15) in the open division … earned eight victories on the Oklahoma Junior Golf Tour, including four of six in the summer/fall of 2014 … represented the U.S. in the 2015 Toyota Junior Golf World Cup … tied for 4th at the Trusted Choice Big I National Championship … won the 2014 Red River Junior Golf Championship … was the 2014 Oklahoma Golf Association (OGA) stroke play champion at nine-under … birdied his final four holes to win the 2014 Oklahoma Junior Golf Tour Championship by one stroke … captured 31 tournament titles during his high school career.