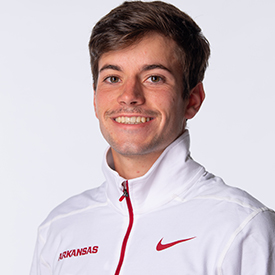 Senior (2020)
In his fourth consecutive SEC Championship, placed ninth to earn second team All-SEC honor and was fifth scorer for Razorbacks with a time of 24:03.9 on 5 mile course at Baton Rouge … Part of 5-6-7-8-9 finish by Arkansas as they totaled 35 points for the conference victory … Fifth Razorback on team victory in SEC Preview over Mississippi (29-37), placed ninth among field with 17:52.8 on 6k course to open season … Placed 10th in UAB Blazer Classic with a time of 23:40.6 over 8k course to finish as sixth runner for Razorbacks.

Freshman (2017)
Made his collegiate debut for Arkansas at the SEC Championships (Oct. 27) finishing 11th overall and fourth for the Razorbacks with a time of 24:10.80 … His performance earned him the SEC Freshman Runner of the Year award and All-SEC second-team recognition also being named to the SEC All-Freshman team … In his second meet, he competed in the NCAA South-Central Regional finishing 16th overall earning All-Region honors … He closed out his first cross country season at the NCAA Cross Country Championships (Nov. 18), finishing fifth for the Razorbacks helping bring the team to a fifth-place finish.

Personal
Born on Sept. 16, 1998 … Son of John and Nicole Young … Has an older brother; Jack and a younger sister; Heidi … Majoring in accounting.