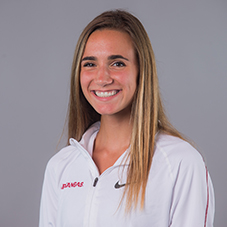 Redshirt Sophomore (2017)
Started off her year at the Cowboy Preview (Sept. 1), finishing fourth overall and second for the Razorbacks at 10:42.70… In her second meet, she finished fifth overall at the UC Riverside Invitational (Sept. 16) at 17:37.10, the fourth-best time for Arkansas.

Redshirt Freshman (2016)
Began her career as a Razorback at the Riverside Invitational (Sept. 17). She finished with a time of 18:27.10 over the 5K course, good enough for the sixth-best time for Arkansas and 28th overall … Improving her performance with a personal best of 17:39.50, she was able to finish as 33rd overall and 13th for the Razorbacks.

Personal
Born on June 28, 1996 … Daughter of Holly and Sandy Huckabee … Has an older sister, Marley and an older brother, Lance … Majoring in kinesiology … Plans on pursuing a career in physical therapy and or coaching upon completing her degree.