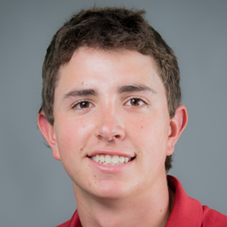 Won the Mexican Amateur held at Yucatan Country by 12 strokes with rounds of 69-68-70-65 to shoot 16-under par … carded 27 birdies over the four rounds and played the par 5s at 12-under … earned an exemption into the U.S. Amateur with the win at the Mexican Amateur … tied for 16th at the Western Amateur at The Beverly Club through four rounds of stroke play and lost in a playoff to advance to the 16-player match play tournament … used a first round three-under 67 to ultimately tie for 15th at the 61st Sunnehanna Amateur … represented Colombia at the 2014 World Amateur Team Championships in Japan, finishing six-under par in a tie for 51st place … was the team’s low-man the first two rounds and had a counting score on three of four days.

Started all eight tournaments in the spring and 11 on the year … improved scoring average but over a stroke from freshman campaign at 73.7 over 33 rounds … finished in the top 10 at the NCAA Columbia Regional (T-6th) and in the top 20 three times … turned in a counting score in 23 rounds, highlighted by the final 10 to end the year … tied for third on the team with six under-par rounds, including four in postseason that were all in the 60s … carded 84 birdies and tied for the team lead with two eagles … team low-man in five rounds and at the SEC Championship … sported a 70.6 stroke average over three postseason events, was the low-man in three rounds and was a combined one-under over the three tournaments … played the final two rounds of the NCAA Columbia Regional at eight-under (67-69) to tie for 6th overall … scorecard of 73-67-69/209 (-7) featured 11 birdies and an eagle … tied for team-low man and 13th place at the SEC Championships, setting a program 36-hole record at the tournament with rounds of 66 (-4) and 68 (-2) … his three-day two-under 208 is tied for the third-best 54-hole score at the SEC Championship in program history … earned a spot on the SEC Spring Academic Honor Roll.

PING All-America honorable mention choice … team low-man at the NCAA Championships as he tied for 13th place, highlighted a program NCAA Championship record 6-under 64 in the second round that broke John Daly’s record of 65 at the 1986 Championship … posted a 70-64-72/206 (-4) scorecard at the NCAA Championship that featured 12 birdies and 36 pars … played in 11 tournaments, including eight as part of the five-man team and three as an individual … finished with a 74.8 stroke average over 31 rounds … finished in the top 20 (T-14th) at the NCAA Fayetteville Regional at 76-70(-2)-74/220 … contributed a counting score in five of six NCAA rounds with a 71.0 stroke average … finished in the top 20 three times … carded two rounds at under-par and five at even-par … turned in a counting score in 15 of 23 rounds … tied for 20th at the Jack Nicklaus Invitational … put together back-to-back even-par 72s to close the General Hackler Championship in a tie for 21st place … earned a spot on theSEC First-Year Academic Honor Roll … named to the Athletic Department’s Athletic Director’s List (3.50-3.99) for fall semester.

No. 4 player in the class of 2012 by Golfweek and No. 6 boys player overall … 2011 second team AJGA Rolex All-American … member of Colombian National team … placed third at the Junior World Golf Championship as a junior … took third at the 2011 Canadian International Junior Challenge … semifinalist at the US Junior Amateur in 2011 … placed third at Doral/Publix Junior Classic as a sophomore and won the Colombian Amateur … tied for medalist honors during stroke play of U.S. Junior Amateur in 2012 and advanced to the semifinals of match play for the second straight year … tied for 14th at HP Boys Championship.

Born Aug. 4, 1994 … son of Emilio and Ana Maria Echavarria … has two older brothers, Andres and Miguel … brother, Andres, played at Florida and is currently on the Web.com Tour while Miguel played at Michigan … international relations major.