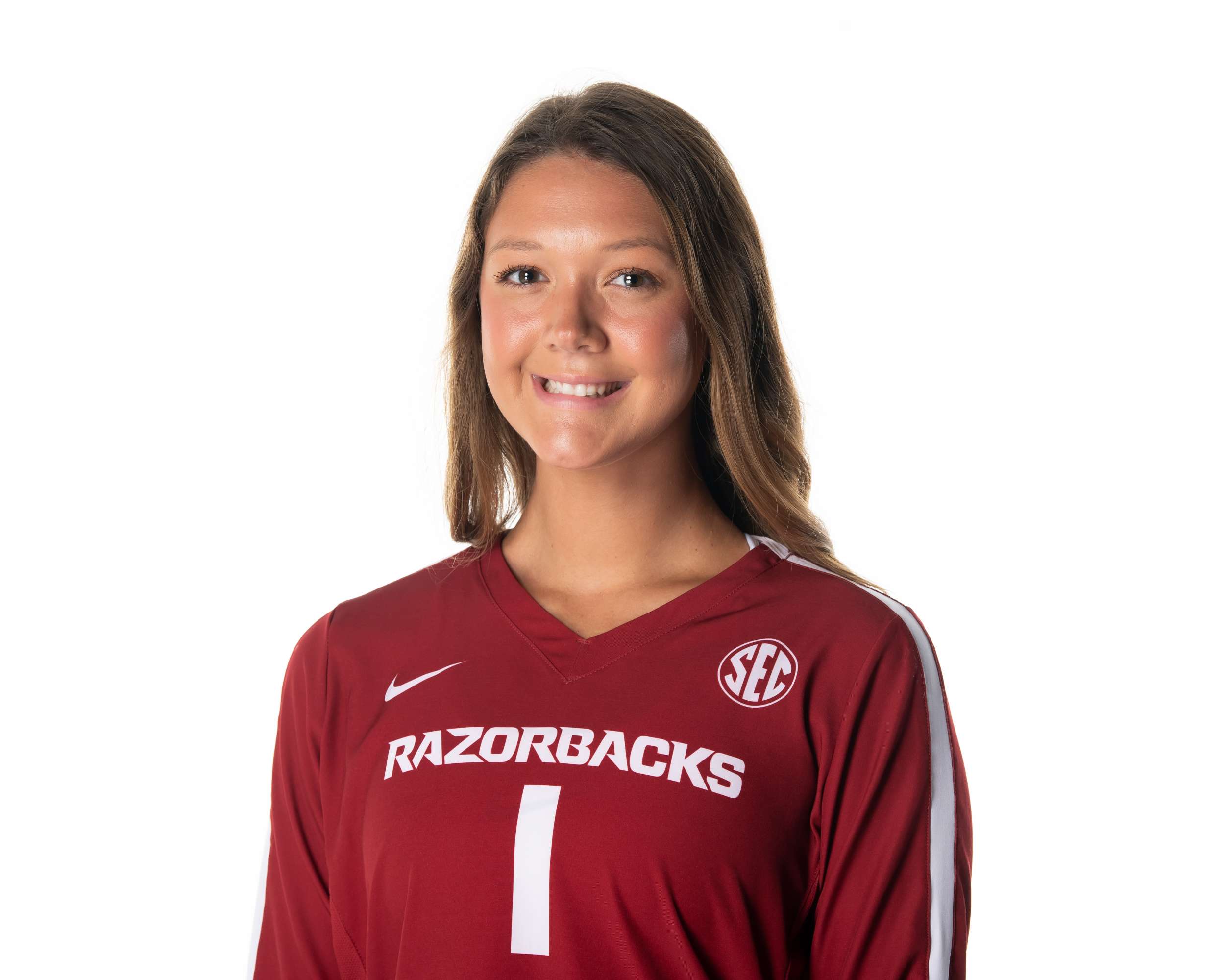 2019 | Senior
Finished her career with 3,768 assists after recording 679 assists during her final season… leaves Arkansas as the all-time assist leader during the rally scoring era, achieved against Ole Miss on Nov. 22…. had a season-high 44 assists against Mississippi State (Nov. 24) and 15 digs against Alabama (Sept. 29) …. led the team in both assists and assists per set (6.11)… recorded five double-double performances for the second straight season for a total of 29 double-doubles in her career…. Recorded 41 total blocks, 34 against SEC opponents – tallied 25 kills against SEC opponents as well… Was a match-stat leader for assists 22 times and racked up 17 performances with 20 or more assists, eight with 30 or more assists. Leaves Arkansas top five in career assists, assists per set (8.64), service aces (85) and sets played.

2018 | Junior
Appeared in 27 matches with 26 starts for a total of 99 sets…recorded 794 assists…has fourth-most career assists in program history with 3089…ended the season at No. 7 in the SEC for assists/set (8.02)…had a team-leading five double-double performances, now has 24 career double-doubles…tied for first on the team with 21 service aces…recorded 178 digs to average 1.80 digs/set…ranks 25th in program history with 627 digs.

2017 | Sophomore
AVCA All-South Region Honorable Mention…two-time SEC Setter of the Week…second in the SEC and 21st in the NCAA with 11.23 assists per set…11 matches with 50 or more assists…tied career high with 59 assists against SMU (Sept. 16), Alabama (Sept. 27) and Ole Miss (Oct. 29)…set Arkansas to a .250 or higher hitting percentage in 17 matches including seven outings with a .300 or higher figure…season-high .430 team hitting percentage against Mississippi State (Oct. 22) tied No. 6 mark in program history…fourth setter in program history to reach 1,300 assists in a single season and first to do so since 2003…second on the team with 12 double-doubles…averaged 2.16 digs per set…career-high 17 digs at No. 4 Florida…seven matches with four or more blocks including a career-high eight total blocks against Texas A&M (Nov. 5).

2016 | Freshman
Made 25 starts and appeared in all 110 sets played…averaged 10.52 assists per set during SEC play which ranked sixth among league setters…nine matches with 40 or more assists including a pair of 50+ performances…career high 56 assists at Mississippi State (Nov. 20)…five primary attackers tallied at least 10 kills at Georgia (Nov. 18), first time by the program since 2007…set the team to .250 or higher hitting percentage in seven matches including a season-high .374 efficiency at LSU (Sept. 25) in the SEC opener…led the team with 29 service aces and seven double-doubles…career-best 13 digs at No. 4 Kansas (Sept. 3) and against Auburn (Oct. 23)…13 matches with seven or more digs.

Prep
Rippee comes to Arkansas as a two-time Team USA selection, most recently as a member of the 2014 USA Girls’ Youth National Team. She helped Team USA qualify for the FIVB World Youth Championships with a second-place finish at the NORCECA qualifying event in Costa Rica. She had previous experience with the 2013 USA Girls’ Select Team that was second at the High Performance Championships in Ft. Lauderdale, Fla. Rippee was an all-state performer as a junior and earned two all-district and three all-conference accolades during her prep career at Kickapoo High School in Missouri.

Personal
Rachel is the daughter of Richard and Shelly Rippee with an older brother, Ryan. Rippee played for the Ozark Juniors volleyball club. Along with her prowess on the court, she was a four-year academic all-conference selection and plans on majoring in education at the University of Arkansas.