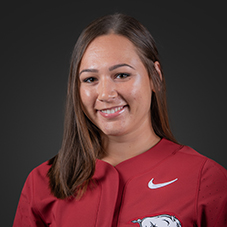 Recorded one start and 18 appearances … Registered two hits and three RBI in 11 at bats, including a two-RBI double against Northern Colorado (Feb. 15) and a walk-off sacrifice fly against Arkansas’ 12-inning win over Furman (April 13) … Scored four times for the Hogs against Northern Colorado, Boston (March 2), Wichita State (April 10) and Auburn (May 4).

Made nine appearances in the cardinal and white… scored three key runs for the Razorbacks against LMU (Feb. 18), Ole Miss (April 20), and Wichita State (May 20)… Her run against LMU was the tying run in the sixth inning that kept Arkansas’ comeback victory alive.

Scored three runs and picked up a pair of hits in 10 appearances…made first career start (DH) at No. 17 Kentucky (March 25)…recorded first hit against Loyola Marymount (Feb. 17) and first RBI in game one of doubleheader against UMKC (March 7).

As a freshman at Louisville, Benz played in 25 games including nine starts during the 2015 season. She finished the year with a .295 batting average and a pair of home runs. Seven of her 13 hits came against Atlantic Coast Conference teams. Benz tallied two multiple-hit and -RBI games. She brings postseason experience to Fayetteville after helping Louisville secure a berth into the 2015 NCAA Tournament. For her work in the classroom, she was on the ACC Academic Honor Roll. Benz was an all-state selection and four-time all-conference performer at Glenbard North High School in Illinois. As a senior, she capped her prep career by hitting .459 with 13 extra-base hits, 29 RBIs and 39 runs scored on her way to securing all-area honors.