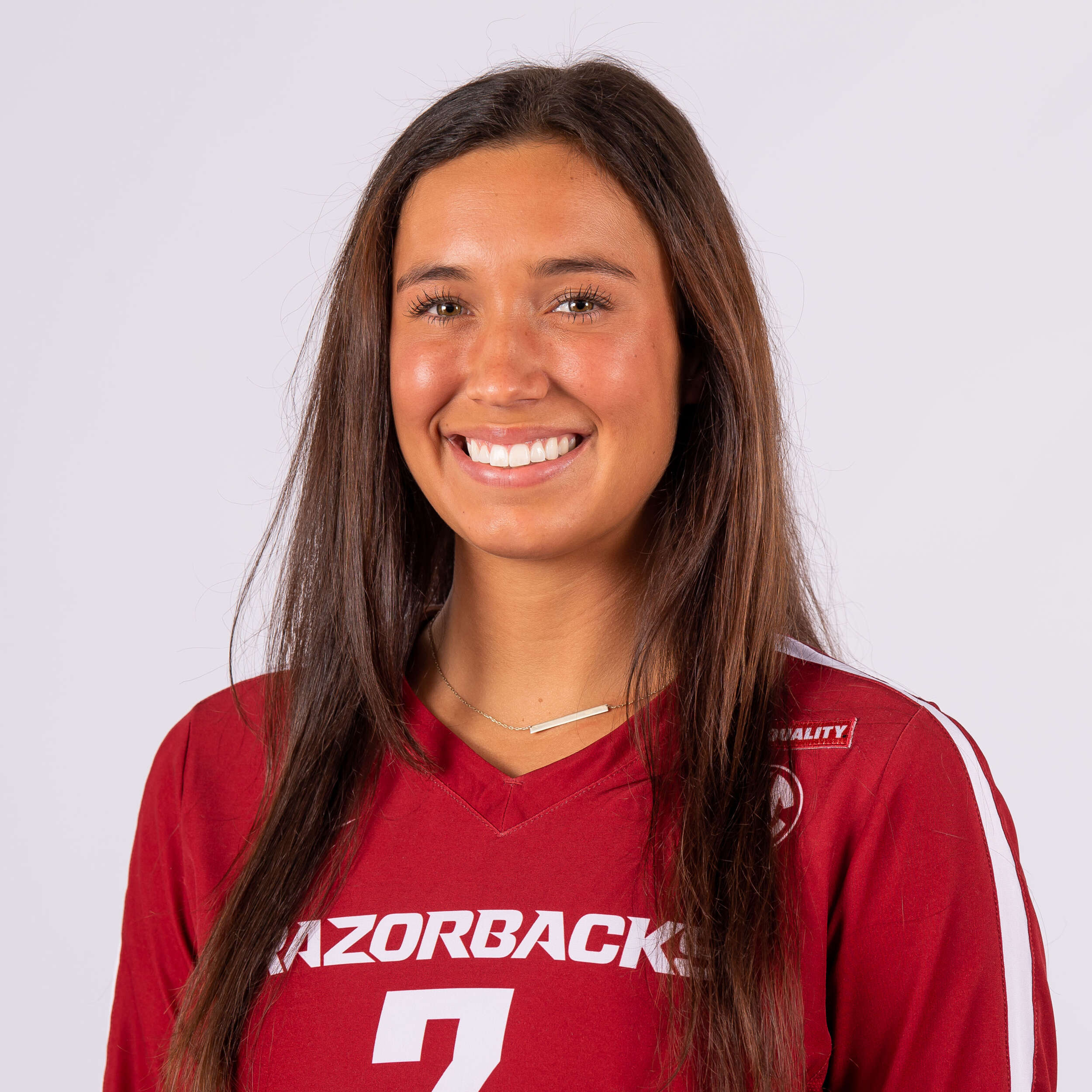 2021 | Sophomore
Started every match for Arkansas and played in all but one set… finished the season second on the team in total kills (411) and kills per set (3.57) and was second on the team in hitting percentage (.226)… led the Razorbacks in kills in nine matches and had 25 with 10+ kills… set a season and career high in match kills with 20 against Auburn (Oct. 10)… set or matched career game highs in kills (20), attempts (54), assists (three), aces (three), digs (20), blocks (five), block solos (two), block assists (five) and hitting percentage (.636)… had 13 double-doubles on the season, which includes a 20-dig performance at Utah State (Sept. 3)… placed on Arkansas Classic All-Tournament Team in opening weekend of the season with 35 kills and a .468 hitting clip… named Bobcat Classic MVP with 40 kills, a .304 hitting percentage and seven aces… registered three zero-error performances, including Arkansas’ sweep over Stephen F. Austin in the second round of the NIVC

2020 | Freshman
Six-rotation starter for the Hogs, appearing in all 83 sets on the year… SEC Freshman of the Year, SEC All-Freshman Team selection and AVCA All-South Region Team selection… was the SEC’s leader in double-doubles with 13 in 22 matches (five-straight to start her rookie campaign)… 16 matches with double-digit kills with a season-best 18 kills vs South Carolina (March 19) and 17 matches with double-digit digs with a season-best 20 at Mississippi State (Oct. 18)… 2nd on the team and 9th in the SEC in digs (3.17 digs per set)… three-time SEC Freshman of the Week.

From PrepVolleyball: She has improved her passing and serving game tremendously this past club season and they already were good, the product of lots of time developing her ball control skills while playing sand volleyball….Improved eye work and block moves now make her an asset defending the slide at the net and she has a laser jump float that wreaks a lot of havoc on opponents. Head is a strong leader, she plays with a steady presence and calm that makes helps keep her teammates calm and believing. She may be humble and her game face is a smile but don’t be fooled: she is fiercely competitive. The Razorbacks got themselves a good one.

From Coach Watson: “In order to get to this level, you need to love the game.  You need to be able to learn, grow and compete.  Taylor has a remarkable passion for the game.  She’s always playing volleyball.  A six-rotation Outside, she has developed herself into a solid volleyball player.  Her skill set and personality are going to have a profound impact on our program.”