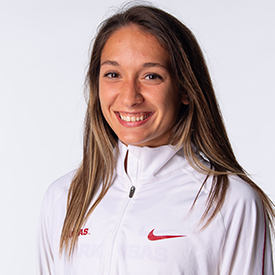 Sophomore (2017)
Began her second season with Arkansas at the UC Riverside Invitational (Sept. 16) with a 20:16.20, finishing with the second-best time for the Razorbacks and seventh overall… Competed in the Pre-Nationals meet (Oct. 14), she finished with the fifth-best time for Arkansas at 20:39.50 … At the SEC Championships (Oct. 26) she helped Arkansas win the SEC Conference title placing second overall with a time of 20:07.10 … She earned All-Region honors at the NCAA South Central Regional (Nov. 10) with the fourth-best time for the Razorbacks and finishing 11th overall at 20:14.20 … She competed in the NCAA Cross Country Championships finishing with the fourth-best time for Arkansas and 104th overall at 20:44.70.

Freshman (2016)
NCAA All-American … Began her Razorback career by running the best time at the UC Riverside Invitational (Sept. 17) with a 16:48.52 … Followed it up with a top-three finish at the Chile Pepper Festival (Oct. 1) … Placed 27th overall at Pre-Nationals (Oct.15) with the Razorbacks second-best time of 20:44.40… In her first SEC Championship (Oct. 28) Werner finished 15th overall, helping Arkansas to finish No. 1 in the conference … Assisted in Arkansas’s first-place finish in the NCAA South Central Region Championship (Nov. 11) with the fifth-best time overall time of 20:31.20, earning her All-Region accolades … Capped her year racing to All-America honors with a new 6K PR of 20:10.50 at the NCAA Cross Country Championship (Nov. 19) … Werner is one of six Razorbacks to reach All-American status as a freshman.

Personal
Born on May, 1, 1998 … Daugther of Chris Werner and Rebecca Berry … Has one sibling, Shelby … Majoring in kinesiology and exercise science.