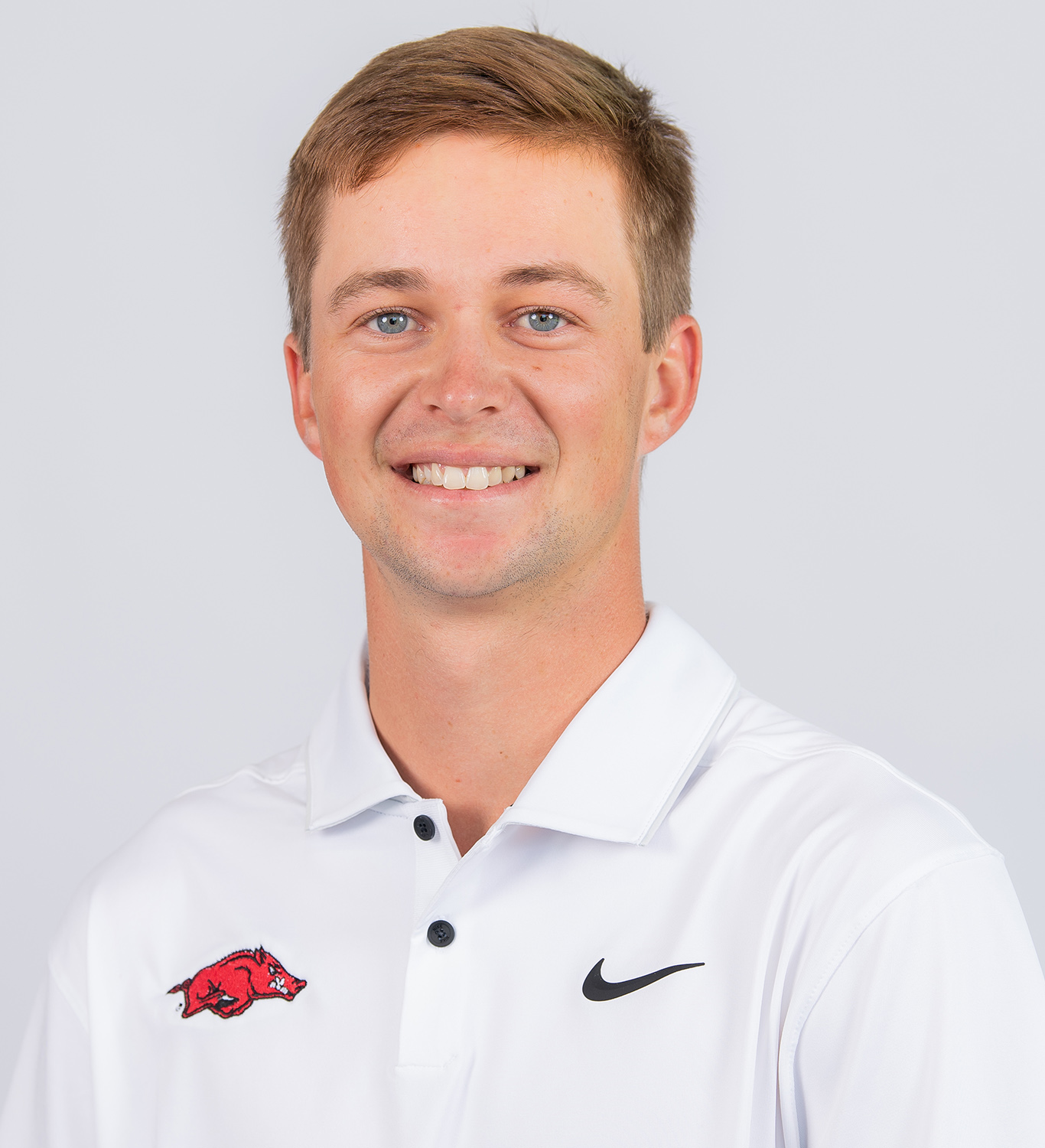 » Graduated from the University of Arkansas in the spring of 2022 with a degree in finance.
» The program’s first player to be a three-time SEC Community Service Team selection.
» Has earned SEC All-Academic recognition in each of his first four years.

As a Junior (2020-21)
» 2022 Srixon/Cleveland Golf NCAA Division I All-America Scholar
» SEC Spring Academic Honor Roll
» SEC Community Service Team
Named to the SEC Community Service Team and the SEC Spring Academic Honor Roll for the third straight year … … Srixon/Cleveland Golf NCAA Division I All-America Scholar … Played in nine events, helping Arkansas win the Blessings Collegiate and the SEC Fall Match Play titles … Came on strong in the spring with four rounds in the 60s, including a 69-74-69 at thee Cabo Collegiate and 75-69-69 at the SEC Championship … Was the Hogs’ top finisher at the Aggie Invitational (T-19 / 74-81/73) and the SEC Championship (T-25) … Fired rounds of 71-71 over the final 36 holes at the NCAA Columbus Regional to propel Arkansas to a fourth-place finish and berth to the NCAA Championship … Shot a second-round 75 to help Arkansas place ninth at the NCAA Championship … Opened the season by tying for 10th at the Carmel Cup (68-75-70=213 / -3).

As a Redshirt Sophomore (2020-21)
» SEC Spring Academic Honor Roll
» SEC Community Service Team
Named to the SEC Community Service Team and the SEC Spring Academic Honor Roll for the second straight year … Played in three events, two with the team and one as an individual … Had a season stroke average of 74.63 with an eagle, 18 birdies and 87 pars … Played in the season-opening Blessing Collegiate Invitational and tied for 46th … Tallied his best career finish after tying for fifth at the Individual Spring Kickoff in Irving, Texas … Had rounds of 72-71 for a 1-over-par 143 … HIs score counted in two of the three rounds at the Collegiate Invitational, shooting 70-79-77.

As a Freshman (2018-19)
» SEC First-Year Academic Honor Roll
Earned SEC First-Year Academic Honor Roll honors … Played in eight events, five as an individual … Finished with a stroke average of 76.52 over 32 rounds … His best outing was a T-13th at the Querencia Cabo Collegiate, shooting rounds of 69-72-70 for a 2-under-par 211 … Fired 13 birdies … Was on a starting lineup for the season-opener at the Carmel Cup as well as the following event at the Gopher Invitational … Thanks to his effort at Cabo, also cracked the starting lineup at the Valspar.

High School
Four-time first team All-State, collecting two state titles, a runner-up and a seventh-place finish … Won the AJGA Junior All-Star at Lost Springs and posted a top-10 finish at the AJGA Rome Junior Classic …Named the 2015 Wendy’s Arkansas High School Golfer of the Year … Captured back-to-back 6A Individual State Championships in 2015 and 2016 …. Finished runner-up in the state as a freshman in 2014 … As a senior in 2017, placed seventh at 6A state championship … A member of four state championship teams and helped lead his high school team to a 183-3 match record in four years … Played in the 2018 PGA Junior Boys Championship and tied for 35th … Played in the 2017 and 2018 US Junior Amateur, advancing to match play in 2016 … Finished runner-up at the 2016 ASGA High School Overall Tournament and is a three-time ASGA High School Overall Tournament qualifier … A three-time 6A East Conference Medalist … A four-time ASGA Tournament Champion, a three-time USJGT Tournament Champion and won the USJGT Director’s Award for excellent play and sportsmanship.