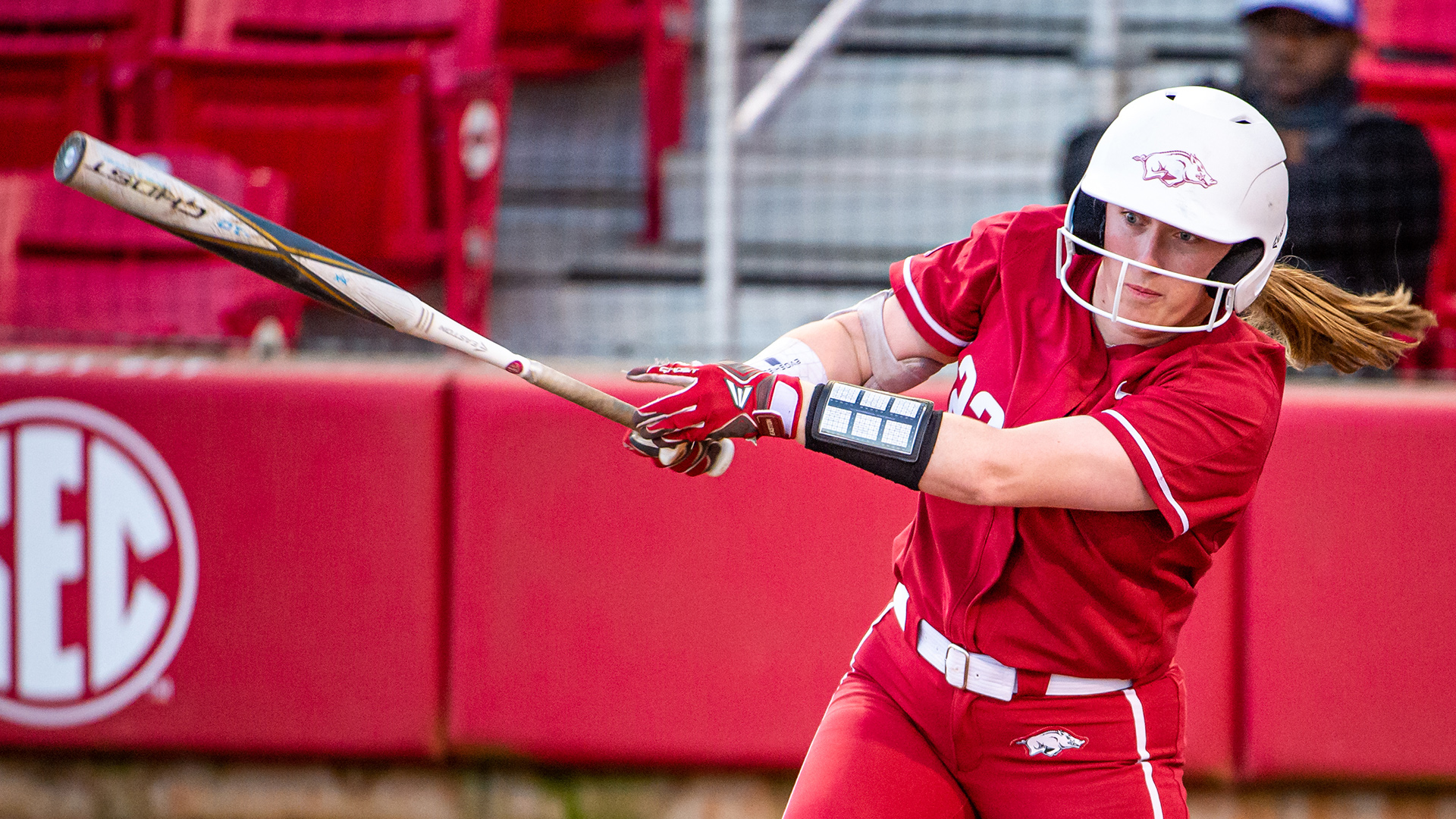 Over both games of the twin bill, infielder Danielle Gibson went 4-for-6 at the plate, hitting two doubles and collecting four RBI. Outfielder Hannah McEwen extended her hitting streak to all seven of Arkansas’ 2021 games, and infielder Audrie LaValley cracked two round trippers. Through the year’s first seven games, the Razorbacks (5-2) have hit 17 homers.

Arkansas immediately exploded for four runs in both the first and second innings, taking a quick 8-0 lead in UTA’s season opener. McEwen and infielder Braxton Burnside singled to start the game, and Gibson pulled a single through the right side plating the game’s first run. With two outs, infielder Hannah Gammill cleaned the bases towering a three-run homer, her third in as many days, over the left field wall.

In the second, Gibson recorded her second RBI of the game sneaking a double down the right field line. Designated player Linnie Malkin continued her torrid start to the season, yanking Arkansas’ second three-run tater over the wall. The Broomfield, Colo. product leads the team with four home runs, after hitting six in 25 games last season.

UTA (1-1) clawed back in the bottom of the third. scoring two runs on a double and a groundout, but the Razorbacks got a run back immediately in the top of the fourth, as Keely Huffine smacked a solo shot on the frame’s first pitch. LaValley slugged the first of her two homers, a solo homer in the sixth inning, giving Arkansas a 10-5 lead. LaValley and Huffine homered from the eighth and ninth spots of the lineup, restively.

The Mavericks closest deficit was the game’s final score of 10-6 after scoring a single run in the sixth, but didn’t threaten beyond that.

Gibson finished a perfect 3-for-3 with a double, two runs scored and three RBI. McEwen joined her as the only other Hog to register a multi-hit game (2) and also scored twice.

Both team’s sticks were quiet until Arkansas’ offense found its groove in the fifth inning and scored in each of the game’s final three stanzas. After Huffine and McEwen were both hit by a pitch, Burnside successfully advanced both runners a base on a groundout, setting up Gibson’s clutch two RBI double to center which gave Arkansas a 2-0 lead. Leading off the next inning, LaValley homered for the second time on the day, taking a 3-2 pitch opposite field to left extending the Razorbacks lead, 3-0.

The Mavericks would not go away without a fight, however, and hit a two run home run in the bottom of the sixth, drawing within one. For the second straight inning, the Razorbacks tattooed a leadoff jack as McEwen went yard providing a much-needed insurance tally. UTA hit a solo homer when it was down to its final strike in the seventh, but Arkansas regrouped to retire the next hitter for the game’s final out.

Arkansas plays its home opener on Thursday, Feb. 25 with a doubleheader against North Dakota State as part of the Razorback Invitational. The Hogs are slated to play the next 11 games at home inside Bogle Park.