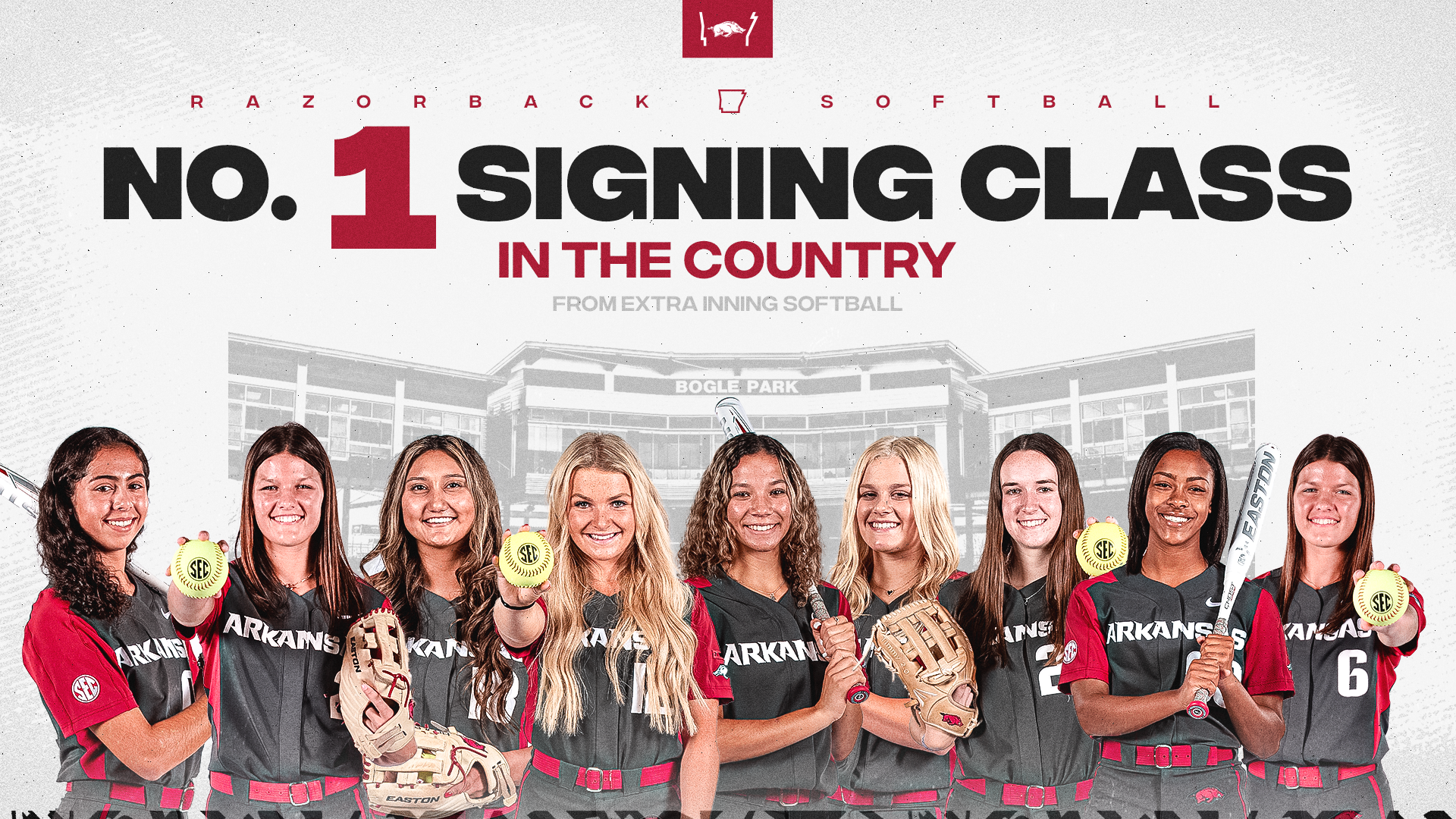 “Our 2022 class has it all. These nine student-athletes bring a high level of speed, power, athleticism, and elite pitching and are also incredibly passionate about Arkansas,” said Deifel. “This class not only elevates our play on the field they also fit perfectly into the culture that we have established for Razorback softball.”

A two-way player, Hannah Camenzind joins her twin sister Lauren in Arkansas’ signing class and is a two-time state champion and all-state selection at Skutt Catholic in Omaha. She is also ranked 12th on Extra Inning Softball’s 2022 Extra Elite 100. Camenzind mashed 44 home runs and drove in 144 RBIs in her high school career and, as a senior, hit .648 with an astronomical 2.238 OPS. Nebraska high schools play softball in the fall and in her 2021 senior season, she collected a 1.30 ERA with a perfect 16-0 record. This past summer, she hit .357 with 15 doubles and 15 home runs while logging a 1.26 ERA with 163 strikeouts for Aces Fastpitch. The daughter of Chad and Amanda Camenzind, Hannah chose Arkansas because of the coaches and family environment.

What Deifel is saying: Hannah is an intense competitor whose versatility is one of her biggest assets. She is crafty in the circle, has a dynamic bat, and will compete from day one. We could not see our 2022 class without Hannah and Lauren in it.

The No. 22 player in Extra Inning Softball’s 2022 Extra Elite 100, Lauren Camenzind will join her twin sister Hannah at Arkansas. Lauren is a three-time all-state honoree and won back-to-back state titles with Hannah at Skutt Catholic. She logged a .489 batting average with 11 doubles, 15 home runs, 39 RBIs and 57 runs and registered a 1.733 OPS for a 33-0 SkyHawks team, the first ever undefeated squad in Class B. During four high school seasons at Skutt Catholic, the Camenzinds guided the team to two state titles and a combined record of 122-16. She played on the travel circuit for Aces Fastpitch and hit .385 with 19 doubles this season. The daughter of Chad and Amanda Camenzind, Lauren says the passion that the state has for the university is second to none.

What Deifel is saying: Lauren is an explosive athlete that has superb range on defense. One of the attributes that makes her one of the top players in the country is her consistency in all aspects of the game. Lauren and Hannah have made a name for themselves, and we are really excited to bring ‘the twins’ to Fayetteville.

Another 2022 Extra Elite 100 student-athlete, Rylee Cloud checks in at No. 24 on the list. In her junior season, she hit .611 with 11 home runs and earned all-state and district MVP recognition at Fairview High School. Extra Inning Softball tabbed her the National High School Player of the Week in March as she hit .895 (17-for-19) in six games with eight home runs, two doubles, a triple, 16 RBIs and 13 stolen bases. Cloud missed two high school seasons due to the COVID-19 pandemic and an injury but hit .635 as an eighth grader playing varsity and swiped 43 bags. In 2018 she was part of a state semifinalist club and won district MVP honors. The Mittie, La. native played her travel ball for the Birmingham Thunderbolts. The daughter of Devin and Kamie Cloud, Rylee chose Arkansas because the coaches truly care about the players.

What Deifel is saying: Rylee is a big-hitting infielder from Louisiana. She is known to be one of the feistiest players in the 2022 class. Rylee is extremely athletic and versatile and what separates her most is that she is a relentless competitor that would run through a wall for her team.

Kiki Estrada hit .423 as a junior for Orange Lutheran with five home runs, 20 RBIs and a 1.418 OPS. She is ranked 13th in Extra Inning Softball’s 2022 Extra Elite 100. The infielder garnered second team High School All-American honors from Extra Inning Softball and all-state recognition on a Lancers team that captured a 2021 league title. This summer, Estrada posted a .439 batting average and .504 on base percentage with 43 hits, nine doubles, 10 home runs and 34 RBIs for So Cal Athletics. She also helped lead the team to a ninth-place finish at PGF Nationals and was named to the PGF Junior All-American Team. The daughter of Mo and Emily Estrada, Kiki chose Arkansas because of the way the university helps its student-athletes on and off the field.

What Deifel is saying: “One of the top players in the country, Kiki has been a die-hard Razorback since day one.  She is an explosive offensive threat from the left side and will be a staple in the middle of our order.  We expect her to be one of the most feared hitters in the SEC from the moment she steps on campus.

The No. 25 player in Extra Inning Softball’s 2022 Extra Elite 100, Nyjah Fontenot hit .535 in 2021 for a 31-2 Barbe High School squad, helping the team win a state championship. She also produced a .604 on base percentage with 11 home runs, 62 RBIs and 31 stolen bases and hit .714 in the state championship. MaxPreps named her a first team All-American and a National Player of the Year watch list member. As a freshman, she drove in 31 RBIs and stole 20 bases while hitting .411. The Lake Charles, La., product hit .385 with a .500 on base percentage, registering 40 hits and 21 RBIs for the Lady Dukes travel team. The daughter of Willie and Nikki Fontenot, Nyjah chose Arkansas because it felt like home from the first day she arrived on campus.

What Deifel is saying: Nyjah is a high-energy player with a passion to not only work hard but compete at a high level. She is a true triple threat at the plate and has great instincts on the basepaths. We can’t wait to get her in Razorback Red.

Robyn Herron posted a minuscule 0.35 ERA in 79.1 innings and struck 170 hitters pitching for Sickles High School. The lefty hurler was named the No. 14 player in Extra Inning Softball’s Extra Elite 100. During her three-year high school career, Herron has gone 22-8 inside the circle with a 1.54 ERA and 306 strikeouts in 231.1 innings pitched for the top-25 nationally ranked Gryphons. Playing for the Wichita Mustangs travel team, she held a 0.87 ERA during the early part of the season. The daughter of Chad and Jurgita Herron, Robyn says the university and softball program are unlike anything she’s seen before.

What Deifel is saying: Robyn is a left-handed pitcher with elite spin and break. She has the ability to throw four pitches in any count and has incredible command and presence on the mound. Robyn will fit seamlessly into our system and we look forward to seeing her compete as a Razorback.

A southpaw from the Sunshine State, Robyn Herron (@robyn_herron44) is officially a Razorback ✍️#WPS🐗 pic.twitter.com/JfS14tCLHy

Reagan Johnson is rated the No. 9 player in Extra Inning Softball’s 2022 Extra Elite 100 and has stolen 109 bases in her high school career without being caught once. As a junior at Falls City High School, she hit .606 with 42 RBIs, two home runs and 39 stolen bases while being named all-state. Johnson was also named district defensive MVP and earned all-state honors. Competing for the Lady Dukes travel club, Johnson totaled a .443 batting average with three home runs, 33 stolen bases and 57 runs scored this summer. One of the fastest players in Texas, Johnson ran track and field, earning all-state recognition and is a two-time silver medalist in the 300m hurdles. The daughter of David and Stephenie Johnson, Reagan chose Arkansas because she loves the atmosphere of the campus.

What Deifel is saying: A stand out from Texas, Reagan brings a new level of speed to the Razorback Program.  She is one of the most dynamic players in the country both offensively and defensively. Reagan is a player that adds a layer to our offense and will be one of the top baserunning threats in the SEC.

A USA Today Colorado High School Player of the Year, Nikki McGaffin struck out nearly 800 hitters over four seasons at Fossil Ridge High School. The Sabercats reached the state semifinals this year behind McGaffin who went 21-2 inside the circle with a 1.07 ERA and 246 strikeouts, while also leading the team at the dish hitting .477 with three homers, 13 doubles and 28 RBIs. She was a member of last year’s state championship team and is a three-time region champion at Fossil Ridge, pitching to a career 1.92 ERA and a 72-8 record over 522.2 innings pitched. During her career, McGaffin has been named all-state twice and both 5A Player of the Year and Front Range Pitcher of the Year once. The daughter of Shawn and Dawn McGaffin, Nikki chose Arkansas because of the culture surrounding the athletic programs is unmatched.

What Deifel is saying: Nikki loves to compete anytime, anywhere, and in anything. She is a right-handed pitcher that can keep offenses off-balance with her mix of speeds and spins. Nikki is persistent with her work ethic and preparation which will serve her well in the SEC.

From the Rocky Mountains to the Ozarks, Nikki McGaffin (@McgaffinNikki) has officially signed with the Hogs ✍️ #WPS🐗 pic.twitter.com/81JVJxh9If

A 2019 state champion from Corning-Painted Post High School, Atalyia Rijo will become just the second Razorback softball student-athlete from the state of New York when she arrives on campus. Rijo earned a top 10 overall ranking in Extra Inning Softball’s 2022 Extra Elite 100. As a high school junior her team won a section championship and she hit .556, reaching base at a .619 clip while totaling 20 hits, six doubles, two triples, four home runs, 16 RBIs and 22 runs scored. Rijo has been named first team all-state and a two-time Class AA all-star in her career and began playing high school softball as an eighth grader, recording a .426 batting average. Playing travel ball for Team NC this summer, she posted a .339 batting average with five home runs and 24 RBIs. The daughter of Fernando and Audrey Rijo, Atalyia comes from a diamond sports family. Her mother Audrey played Division I softball at UNCW and her dad Fernando pitched 11 seasons in the minor leagues for the Los Angeles Dodgers, Baltimore Orioles, Montreal Expos, Milwaukee Brewers and Houston Astros organizations. Atalyia’s cousin Jose Rijo pitched for 14 seasons in MLB and won the 1990 World Series with the Cincinnati Reds and was named World Series MVP.

What Deifel is saying: Atalyia is a middle infielder with some of the best hands in the game. She is a lefty hitter that swings a big bat. Atalyia has a game savviness and competitiveness that make her one of the best players in the 2022 class.