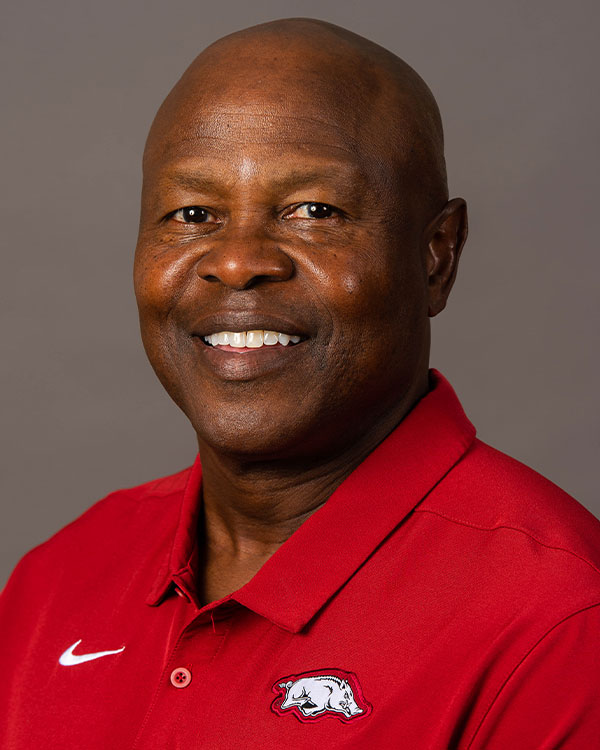 Charlie Williams serves as the Razorbacks’ Director of Football Management and the program’s liaison to NFL teams, bringing a wealth of coaching experience at the collegiate and professional level.

Williams was the wide receivers coach at South Florida from 2017-20 and held the same position on head coach Charlie Strong’s staff at Texas in 2016. A receivers coach for the Tampa Bay Buccaneers from 1996-2001, Williams also has NFL experience coaching the Indianapolis Colts’ running backs in 2015 and serving as the Colts’ receivers coach from 2012-14.

In 2018, redshirt freshman Randall St. Felix led USF with 679 receiving yards and Tyre McCants posted 59 receptions (622 yards), the third-most in program history. In 2017, Williams guided Marquez Valdes-Scantling to a USF season record 879 receiving yards on 53 catches. Valdes-Scantling was selected in the fifth round of the 2018 NFL Draft. McCants also posted a career-best 686 yards and seven touchdowns, including a USF single-game record 227 yards receiving at UCF (11/24/17), part of a USF record 503-yard passing day by quarterback Quinton Flowers. McCants broke the mark previously set by Valdes-Scantling on the season with 186 yards vs. Houston. USF receivers helped Flowers tie a USF season passing record with 2,911 yards as USF ranked sixth in the nation in total offense (513.0 ypg) and 10th in scoring offense (38.3 ppg).

At Texas (2016), Williams coached a receivers group that had seven players finish with at least 20 catches in 2016. Junior Armanti Foreman led the team with 34 receptions for 420 yards and he was one of six players with three TD catches. Junior Jake Oliver and senior Jacorey Warrick combined for 66 catches, 718 yards and six touchdowns. Freshman Devon Duvernay averaged 20.6 yards per catch for an offense that averaged 252 passing yards per game.

Williams returned to the Bay Area where he spent six seasons (1996-2001) as receivers coach with the Tampa Bay Buccaneers under head coach Tony Dungy. While with Tampa Bay, he tutored standout performers such as Keyshawn Johnson, Reidel Anthony and Jacquez Green. Johnson was chosen to play in three Pro Bowls while Williams was his position coach. The 2000 and 2001 Tampa Bay offenses set several franchise offensive records, and the team advanced to the playoffs four times during his tenure.

In 2015 as the Colts’ running backs coach, Williams helped Frank Gore post 967 rushing yards, six touchdowns and more than 1,200 yards from scrimmage for the 10th straight NFL season. In his most recent year as Indianapolis’ receivers coach, Williams helped Colts receivers combine for 219 receptions for 3,004 yards and 16 touchdowns in 2014. T.Y. Hilton became the third player in franchise history to post back-to-back 1,000-yard receiving seasons and recorded the most receptions (214), receiving yards (3,289) and 100-yard receiving games (16) in the first three seasons of a player’s career in Colts history.

Also in 2014, Reggie Wayne finished second on the team with 64 receptions for 779 yards and moved into seventh place in NFL history in career receptions (1,070) and eighth in receiving yards (14,345). First-year receiver Donte Moncrief became the seventh rookie in team history to record multiple 100-yard receiving games in a single season. The wide receivers helped Indianapolis lead the NFL in receiving yards and finish fourth in receptions during the regular season and then advance to the AFC Championship Game, finishing with a 13-6 record.

Prior to Indianapolis, Williams was the wide receivers coach at the University of North Carolina for five seasons (2007-11), where he developed some of the most prolific receivers in school history.

Dwight Jones was a two-time All-ACC honoree and finished ranked fifth at UNC in career receptions (152) and receiving yards (2,163) and fourth in receiving touchdowns (16). In 2011, he set the school single-season mark for receptions (85/No. 5 on the ACC list), tied the touchdown receptions record (12) and posted the second-most receiving yards (1,196) en route to second-team all-conference honors. His averages of 6.5 catches and 92.0 receiving yards per game both ranked 22nd in the nation.

In 2010, North Carolina ranked 26th in the nation in passing offense (264.0 ypg). Jones emerged as the top receiving threat with 62 catches and 946 yards, which both ranked fifth all-time on the UNC single-season lists at the time.

In 2009, Greg Little had 62 catches for 724 yards and five touchdowns, and became a second-round draft pick by the Cleveland Browns in 2011. Erik Highsmith was named to the Sporting News All-ACC Freshman team after 37 catches for 425 yards and two touchdowns.

Williams was also responsible for the development of 2008 first-team All-ACC wide receiver Hakeem Nicks, who finished his three-year North Carolina career with 14 school records, including career receptions (181), receiving yards (2,580) and touchdowns (21). All three starting wide receivers from 2008 were selected in the 2009 NFL Draft, including Nicks, Brandon Tate (third round – New England Patriots) and Brooks Foster (fifth round – St. Louis Rams).

Williams went to North Carolina after serving as wide receivers coach at the University of Arizona from 2004-06. Williams also coached one season for Lou Holtz at South Carolina in 2003, where he helped develop Troy Williamson, who would become a 2005 first-round NFL draft pick of the Minnesota Vikings.

Prior to his first NFL stint with Tampa Bay, Williams was receivers coach for three seasons (1993-95) at Miami, two under Dennis Erickson and one under Butch Davis.

A native of Long Beach, Calif., Williams began his coaching career at Long Beach City College in 1984. He worked as wide receivers coach for two years at New Mexico State (1986-87), four seasons at TCU (1988-91) and one year at Minnesota (1992) before joining the Miami program.

A 1982 graduate of Colorado State, Williams played two years as a defensive back for the Rams (1978-79). He and his wife, Lisa, have two daughters, Sydney and Jada, and a son, Gregory.