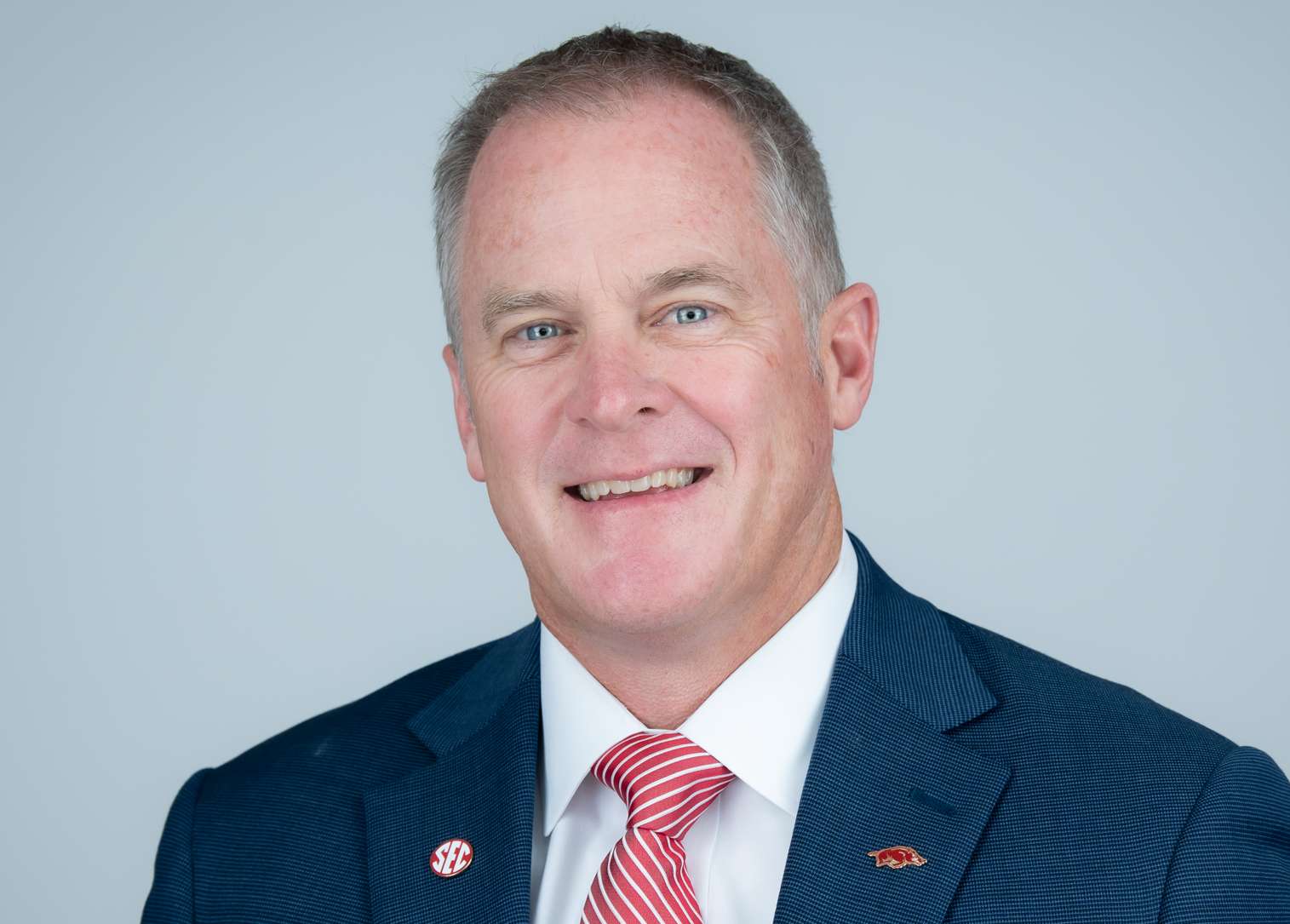 At the University of Arkansas, Yurachek has implemented a program-wide strategic plan that focuses on fostering student-athlete success and centered on achieving the program’s mission of building Champions and Razorbacks for Life. Thanks to the dedicated efforts of Razorback student-athletes, coaches, administrators, Razorback Foundation members and fans, results are being realized on and off the field.

Last year, Razorback Athletics turned in one of the most successful years in school history, including a program-best, eighth-place finish in the 2020-21 Learfield IMG Directors’ Cup. Arkansas’ previous best finish was 14th in the competition that tracks the nation’s most successful intercollegiate athletics programs.

Meanwhile, Razorback student-athletes combined for a 3.25 GPA and 104 student-athletes graduated from the University of Arkansas. A multi-million-dollar renovation of the Randal Tyson Track Center was completed, while brand new facilities, including the $27 million J.B. and Johnelle Hunt Family Baseball Development Center and the $15 million Frank O’Mara Track and Field High Performance Center were constructed.

The many accomplishments came despite the challenges of dealing with a global pandemic. With more than 28,500 COVID-19 tests conducted, Razorback Athletics had a positivity rate of less than one percent and was not the cause of an event cancellation in any sport due to COVID-19.

Yurachek’s leadership is also making a difference within Arkansas, the SEC and throughout intercollegiate athletics. Arkansas Governor Asa Hutchinson named Yurachek to the Governor’s Economic Recovery Task Force, to help guide state reopening in the wake of COVID-19. In April 2021, Yurachek was named to the NCAA Football Oversight Committee, after previously serving on the NCAA Football Competition Committee.

While 2020-21 was the culmination, the program’s trend of success under Yurachek’s leadership was taking shape in previous years. Even in an abbreviated 2019-20 competition schedule, Razorback Athletics built an impressive resume, including winning its first NCAA championship in women’s cross country and its first SEC title in soccer. In addition, the Razorbacks earned SEC championships in women’s cross country and men’s and women’s indoor track and field. Razorback student-athletes followed suit in the classroom, earning a 3.24 cumulative GPA with 107 student-athletes adding their names to Senior Walk as University of Arkansas graduates.

Razorback Athletics was also at the forefront of several key initiatives in 2019-20. In October, Nolan Richardson Court was dedicated at Bud Walton Arena. The Eddie Sutton Men’s Basketball Practice gymnasium was created at the Basketball Performance Center.

In addition, the Razorback Baseball team won a share of the SEC Western Division title and advanced to its second straight College World Series. A total of 14 programs were nationally ranked during 2018-19, including five in the top 10. Arkansas had four NCAA individual and 22 SEC individual champions.

Razorback student-athletes continued to achieve at a high level in the classroom, posting a cumulative GPA of 3.24. The program graduated 98% of student-athletes who exhausted their athletic eligibility.

In 2018-19, Arkansas hosted its first NCAA Men’s and Women’s Golf Championships at Blessings Golf Club. In addition, Arkansas was home to the 2019 SEC Indoor and Outdoor Track & Field Championships as well as both an NCAA Baseball Regional and Super Regional at Baum-Walker Stadium.

Yurachek launched several initiatives to further engage Arkansas and Razorback fans around the world. In August 2018, as part of the One Razorback campaign, the inaugural One Hog Call event was held in Fayetteville, Little Rock and around the globe. Razorback fans from more than 16 countries and 40 states participated in a simultaneous Hog Call.

Yurachek’s first full year in Fayetteville saw tremendous success. Arkansas tied a program record with a No. 16 finish in the 2017-18 Learfield Sports Directors Cup, and first in the nation among schools with 19 or fewer sports.

In Yurachek’s first two years at Houston, the Cougars’ sport programs eclipsed 225 points in the Learfield Directors’ Cup in back-to-back years for the first time in department history, securing top-three finishes in The American Athletic Conference both years. The Cougars improved to second in 2016-17 after finishing third in 2015-16. Houston’s programs combined for a league-leading five American Conference team championships and 22 American Conference individual titles.

The 2016-17 year also saw the continuation of an aggressive facilities plan as construction began on the $60 million renovation of the Fertitta Center, the football indoor practice facility and a baseball player development center and clubhouse with more than $85 million of projects all privately funded.

In his first year in the role, Houston recorded its highest finish in the Learfield Directors’ Cup since 1999-2000 and its second-highest finish in school history with 296.5 points to finish 73rd nationally. The 2015-16 academic year saw the Houston Football program capture The American Athletic Conference Championship and a Chick-fil-A Peach Bowl win over Florida State, the Houston Men’s Track & Field program win The American Indoor and Outdoor Championships and the Houston Women’s Golf program claim an American Championship in only its second year with a full team. In addition, the Men’s Basketball program returned to the NCAA postseason for the 29th time in program history and the Men’s Golf program advanced to the NCAA Championships for the third straight year.

Named by Chancellor Dr. Renu Khator as Chair for a campus-wide steering committee established to oversee the grand opening events for the $128 million TDECU Stadium, Yurachek assisted in the cultivation, solicitation and securing of a 10-year, $15 million-naming rights agreement for TDECU Stadium with the per year value ranking in the top ten nationally for collegiate venue naming rights agreements.

He served as liaison with an architectural design firm on the plans for the $25-million Guy V. Lewis Development Center as well as overseeing the development and implementation of a $500,000 facility enhancement to the Athletics/Alumni Center, including the addition of Cougar Cafe, a student-athlete nutrition center.

Yurachek came to Houston after serving four years as Director of Athletics at Coastal Carolina University where he oversaw a department featuring 18 men’s and women’s NCAA Division I sport programs. A testament of his vision, Yurachek was named the 2014 Under Armour FCS Athletic Director of the Year in May of 2014.

Under Yurachek’s leadership, the Chanticleers won a total of 29 Big South Championships (both regular season and tournament championships), made 30 NCAA appearances and finished a program-best 79th in the 2012-13 Learfield Director’s Cup.

During Yurachek’s time of leadership, Coastal hosted an NCAA Baseball Regional; NCAA Baseball Super Regional; NCAA Division I Football championship contests in 2010 and ‘13; and NCAA Men’s Soccer Championship matches in 2011, ‘12 and ‘13, as well as winning a competitive bid to host the VisitMyrtleBeach.com Men’s and Women’s Big South Basketball Championships in 2013, 2014 and 2015, sponsored by the Myrtle Beach Area Chamber of Commerce.

With all the success, the Coastal Carolina department operated within a balanced budget during Yurachek’s tenure, thanks to his zero-budget initiative and the unprecedented revenues generated since his arrival with his restructuring of the external relations department. In his first year, the department revenue was at $560,000, including $316,000 in ticket sales and sponsorships at $250,000. After the 2012-13 year, revenue came in at $1.4 million, thanks to $549,000 in ticket sales and $600,000 in sponsorships.

Since 2010, the Department of Athletics added women’s lacrosse; launched Champions for Life, a life skills enhancement program for student-athletes; signed a five-year $1.1 million contract with an athletic apparel provider; established the Letterwinners Association; successfully completed NCAA Cycle 3 Recertification; and has been featured on the front page of the sports section of USA Today with the headline reading “Coastal Carolina Piles up Sports Success.”

Also, during Yurachek’s tenure, several major projects that supported intercollegiate athletics totaling more than $250 million were included in the University’s ongoing capital improvements across the campus.

Prior to his appointment at Coastal Carolina University, Yurachek was executive senior associate athletics director at the University of Akron. He led and managed the Zips’ external relations unit, which included marketing and promotions, media relations, ticket operations, development (Z-Fund), video operations and merchandising. In addition, he was the sport administrator for men’s basketball, men’s golf and women’s golf and worked closely with the football program.

He earned his bachelor’s degree in business management at Guilford College in 1990, where he was a four-year letter winner in basketball. He earned his master’s degree in sports administration from the University of Richmond in 1994.

Born in Richmond, Va., and raised in Charlotte, N.C., Yurachek, and his wife Jennifer have three sons: Ryan, Jake and Brooks. Ryan is a former Marshall University football student-athlete and is a graduate assistant on the Razorback Football staff. Ryan and his wife Morgan reside in Fayetteville. Jake is a redshirt-junior football student-athlete at the University of Arkansas. Brooks is a junior at Fayetteville High School and is a member of the football and boys’ basketball teams.