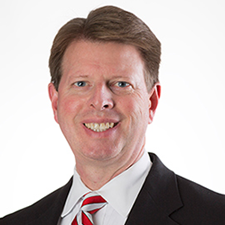 Scott Varady joined the Razorback Foundation as Executive Director and General Counsel in December 2015 after serving more than 19 years with the University of Arkansas’ Office of the General Counsel.

In his previous role, Varady provided legal advice and representation to the University of Arkansas, including the Department of Intercollegiate Athletics. He also consulted with the Razorback Foundation’s outside legal counsel on various matters.

Prior to attending law school, Varady received a Master of Science in Foreign Service from Georgetown University in 1988, where he also earned the Dean’s Award for Academic Excellence.

Varady and his wife, Melissa, have two children, Nathan, a senior mechanical engineering major at MIT who served as a captain of the MIT football team, and Emily, a freshman in the Honors College who is majoring in international studies and is a member of Tri Delt at the University of Arkansas.