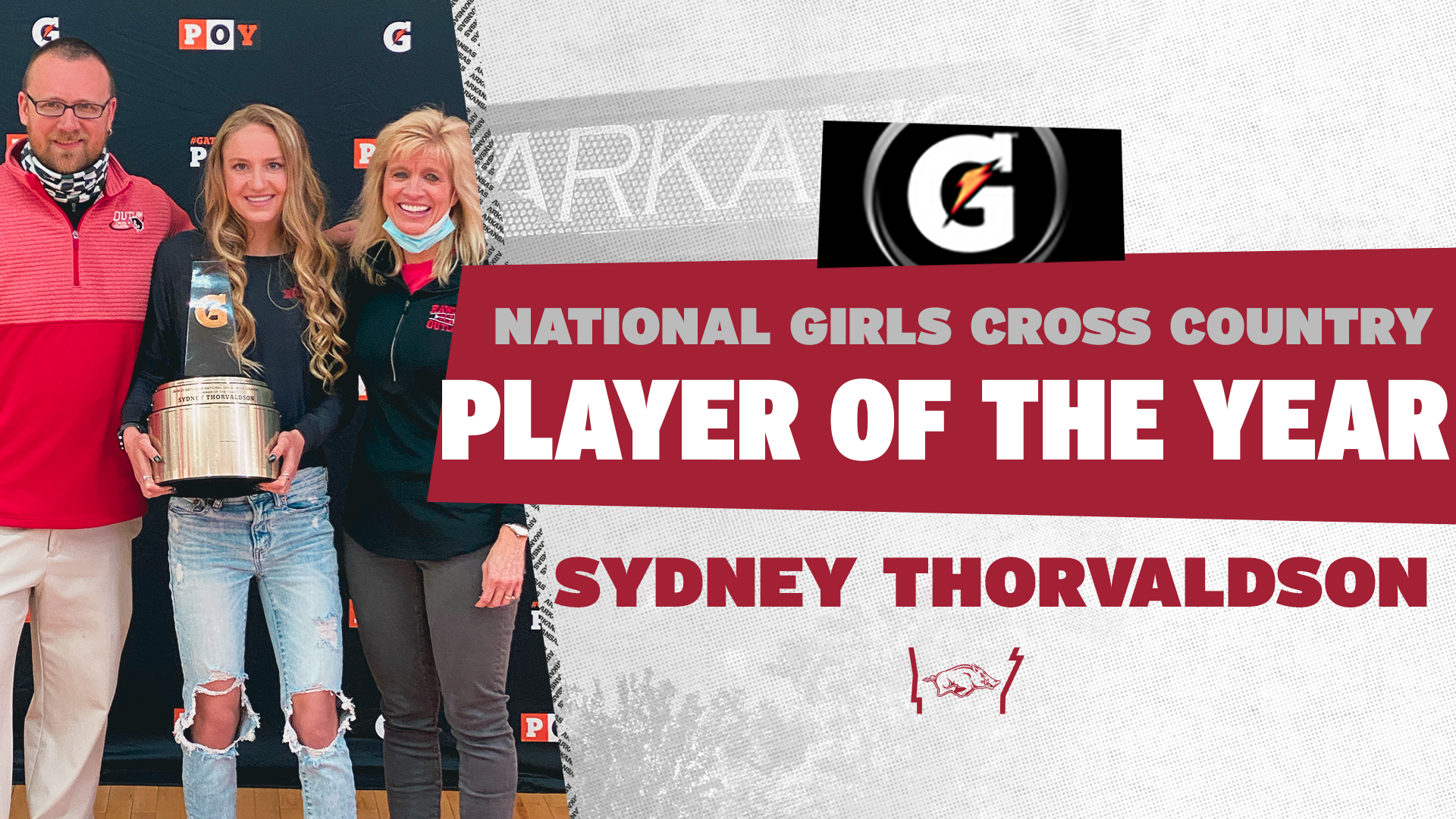 Arkansas signee Sydney Thorvaldson of Rawlins, Wyoming, was selected as the 2020-21 National Girls Cross Country Player of the Year, as announced by Gatorade on Wednesday. This is the second consecutive year an incoming Razorback track and field recruit has received the national accolade.

“Sydney has an impeccable work ethic,” said Arkansas women’s head coach Lance Harter. “She is a dynamo on the course or on the track. She basically lays out the race plan and if you are going to try to race with her, good luck. If you can stay with her, then you’ve accomplished some good things, but she can finish strong as well.

“She had a fantastic season and was rewarded for all the hard work she has put in by herself. I think she is going to be a great asset for us in the years to come.”

Last year the national girls track and field honor went to current Arkansas freshman Taylor Ewert. Among all sports, Thorvaldson becomes the seventh athlete associated with the University of Arkansas to earn a national honor.

Razorbacks Who Were National Gatorade Player of the Year

“It’s an unreal feeling, honestly,” said Thorvaldson of receiving the honor at Rawlins High School on Wednesday. “I’m still in disbelief. It’s been something I’ve been working towards for so long. To see my name compared to so many of these amazing athletes is an honor for me.

“I think it’s kind of been all four years of high school in the making. Every year I was able to get on the national level I would talk with the other girls to learn and develop more. With this being my senior year, I knew this would be the season that I could potentially win it. I just put it out there all on the line and it paid off.”

The 5-foot-4 senior won the Wyoming Class 3A state meet this past season with a state-record time of 16:59.6 in claiming a fourth consecutive state title. Over her four-year high school career, Thorvaldson totaled 35 victories and never lost a race in Wyoming.

In 2020, Thorvaldson also set a state prep 5K record in Colorado when she won the Heritage Distance Classic in 16:19.0. She also owns the fastest prep 5K mark in Idaho by virtue of her title-winning run at the Nike Cross Nationals Northwest Regional in 2019.

After earning a bronze medal in the 2019 Nike Cross Nationals in her third year to compete in the elite meet, Thorvaldson was eager to race on the national level again as a senior. However, the meet wasn’t held in 2020.

So, instead, Thorvaldson traveled to Terre Haute, Indiana, to race on the challenging LaVern Gibson Championship course at the XC Town Meet of Champions. She won the race in 16:38.3, while battling very cold and windy conditions, and bettered the high school course record by 11 seconds.

Another national race followed in Lubbock, Texas, and she produced a winning time of 16:23.9 over another talented field.

A member of the Rawlins High School student council and National Honor Society, Thorvaldson has volunteered locally on behalf of community beautification projects and has donated her time as a teacher’s aide at her church.