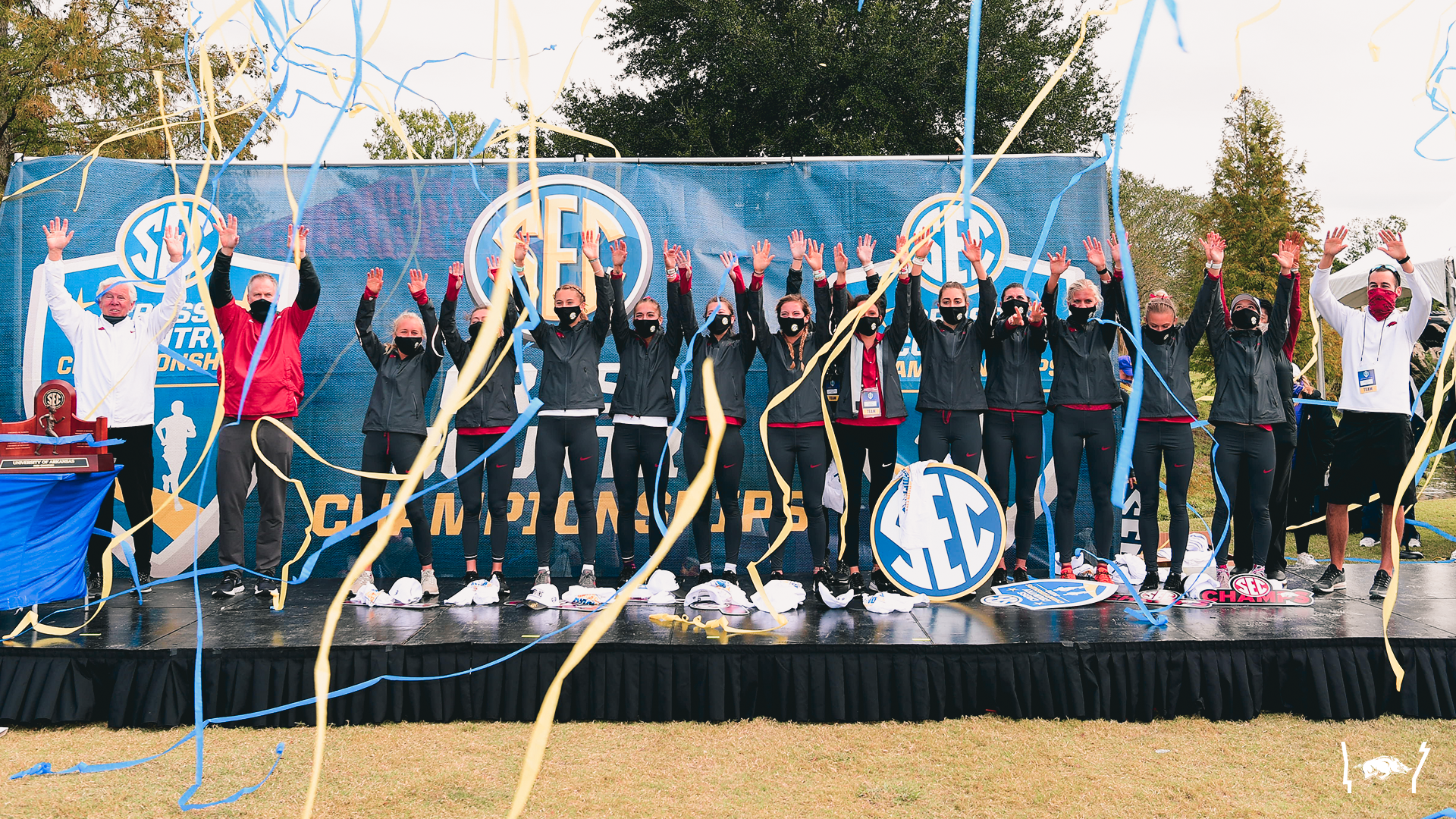 Baton Rouge, La. – In claiming an eighth consecutive SEC Championship in cross country, the No. 1 Arkansas Razorbacks scored 41 points and bettered the field by 16 on the University Club course.

Facing cold conditions, the Razorbacks churned out another championship performance. It’s the 21st league title for women’s head coach Lance Harter among the 30 conference meets Arkansas has contested in the SEC since 1991.

Including indoor and outdoor seasons, Harter and Razorbacks now have a total of 39 SEC titles (21 cross country, 10 indoor, 8 outdoor). Arkansas has won 18 of the past 19 league titles contested through all three seasons.

“To win an SEC crown is very cherished and to finish an undefeated season is icing on the cake,” said Harter. “We’re proud of each and every championship we’ve won, because each one is a different puzzle. Our responsibility as a coaching staff is to try to get all those pieces and fit them in to make the perfect picture.

“For us, the perfect picture is to win a crown, one type or another. We’re very proud of the legacy we’ve established and we’re really looking forward to the future, because this crew will all be back and then we’re super excited about our freshman class that is going to join us.”

The No. 1 nationally ranked Razorbacks won its fourth meet of the season, extending its unbeaten streak to 10 meets after a perfect 2019 campaign that included the program’s first national championship.

The Razorbacks placed their first five runners among the top 11 in producing its winning tally of 41 points. They were separated by 22.2 seconds.

Arkansas’ next five placed 15th through 25th, separated by 13.1 seconds. If the second crew of five Razorbacks were scored separately, they would have placed third in team scoring.

“That shows the depth we’ve been able to develop this year,” noted Harter. “The camaraderie this team has is just truly, truly special.

“Now we’re looking forward the future. I think this race is a great springboard to eventually go to March 15 and try to run a great race at the national championship.”

Previously a bronze medalist in the 2018 SEC meet, Lauren Gregory earned fourth place in clocking 20:06.6 on the 6,000m course. It’s the fourth consecutive year for Gregory to place among the top 10 in the conference championship.

Placing 10th in a time of 20:19.9, Taylor Ewert claimed the best finish by a freshman. She is the fourth Razorback in the past five years to finish as the top freshman in the SEC Championships.

Krissy Grear placed 11th overall and was the fifth Razorback, clocking 20:28.8. Meghan Underwood finished 15th in 20:38.5 as the sixth runner for Arkansas while Corie Smith was the second freshman in the field in 16th place with a 20:38.5, the number seven runner for the Razorbacks.

With the Razorback men also winning an SEC team title, this marks the 18th time Arkansas has swept the league cross country titles.