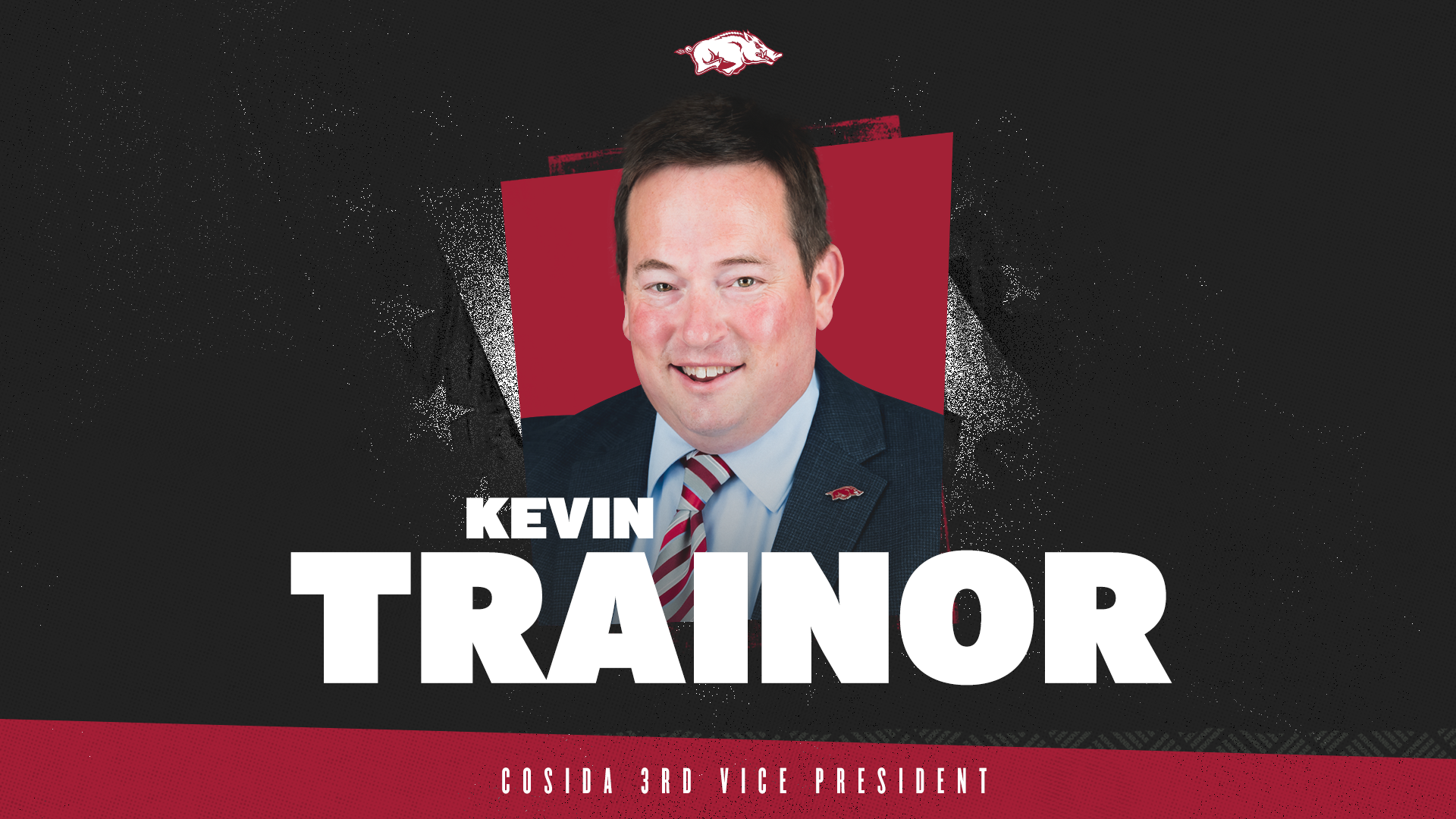 FAYETTEVILLE, Ark. – University of Arkansas Senior Associate Athletics Director for Public Relations and Former Student-Athlete Engagement Kevin Trainor was recently selected as the third vice president of the College Sports Information Directors of America (CoSIDA). Trainor, who has spent the past two years on the organization’s Executive Board of Directors, will enter the officer rotation and serve a five-year term, including one as the CoSIDA president in the 2024-25 academic year.

“I’m absolutely thrilled that Kevin is now part of the officer rotation of CoSIDA and will eventually be our president,” said CoSIDA Executive Director Doug Vance. “We need our strongest and most accomplished leaders in a position to guide the crucial decisions we make and Kevin easily checks all of those boxes. He’s provided outstanding leadership to CoSIDA as a member of the Executive Board of Directors the past two years and also as a member of our Advocacy Committee. His voice in providing important direction for CoSIDA will be meaningful to our future.”

Trainor recently completed his 30th year with the University of Arkansas, including his 26th year in a full-time position with Razorback Athletics. He serves as the chief public relations officer for Vice Chancellor and Director of Athletics Hunter Yurachek. Trainor coordinates the department’s executive and crisis management communications and is a department liaison with the Razorback Foundation, University Relations, the National Football Foundation, the Arkansas Sports and Southwest Conference Halls of Fame. He also recently completed his 11th year as the sports administrator for Razorback Baseball.

A university graduate in journalism in 1994, he earned his master’s at Arkansas in 2005. He is a member of the Football Writers Association of America (FWAA) and the U.S. Basketball Writers Association of America (USBWAA). Trainor is also a member of the board of directors of the Northwest Arkansas Chapter of the Public Relations Society of America (PRSA), the Arkansas Sports Hall of Fame, the Southwest Conference Hall of Fame and the Brandon Burlsworth Foundation.

Trainor has been selected to serve at some of the most prestigious sporting events in the country. He has worked as the primary team media relations liaison to one of the competing teams in each of the first seven College Football Playoff National Championship games. For eight years, Trainor has been the press conference moderator for the nationally televised SEC Football Media Days. He has also been selected to serve as the press conference moderator at multiple SEC Football Championship Games and the SEC Women’s Basketball Tournament. Trainor has been a member of the media relations team for more than 23 Cotton Bowls and has worked numerous Master’s Tournaments for CBS Sports.

CoSIDA was founded in 1957 and is a 3,200+ member national organization comprised of the sports public relations, media relations and communications/information professionals throughout all levels of collegiate athletics in the United States and Canada. The organization, which celebrated its 60th year during the 2016-17 academic year, is the second oldest management association in all of intercollegiate athletics. CoSIDA became an affiliated partner with NACDA (National Association of Collegiate Directors of Athletics) in December of 2008.