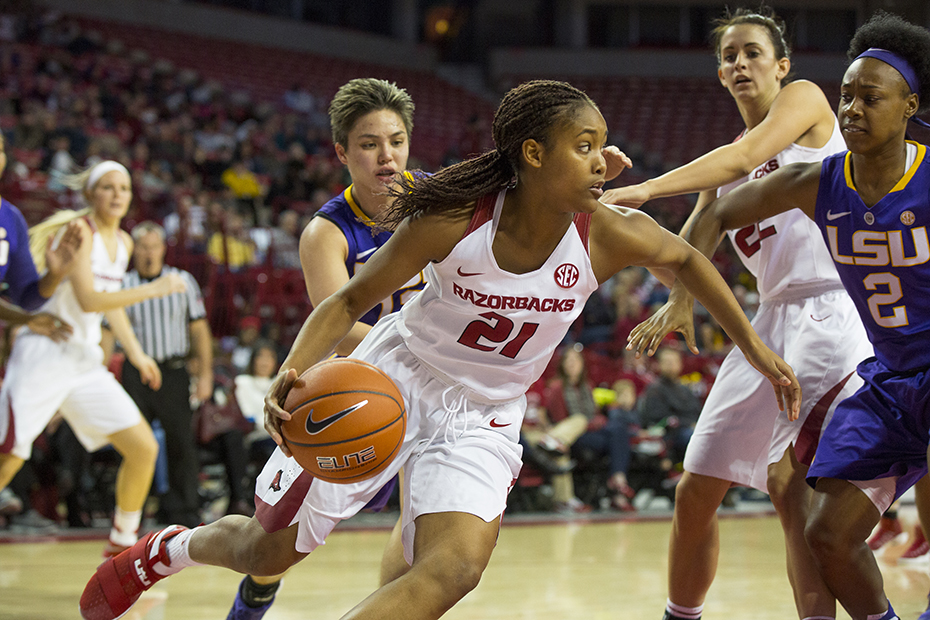 LSU outscored Arkansas 16-7 in the final frame and turned the Razorbacks over a season-high 26 times in the game. Leading 49-40 at the 7:04 minute mark in the fourth quarter, Arkansas got only one more point from the free throw line while turning the ball over 11 times to end the game.

The Tigers scratched their way back into the contest grabbing their first lead, 52-51, with eight seconds to go. LSU committed a foul and sophomore Malica Monk hit a free throw to tie the game with just three seconds on the clock. Arkansas was whistled for a foul while LSU was trying to inbound the ball and LSU made one of the two bonus shots to escape with the win.

Key Run
Arkansas went more than five minutes (5:07) without a field goal to end the game. LSU went on an 11-1 run forcing eight Razorback turnovers and grabbing three offensive rebounds during that time to take control of the contest.

Key Stat: 26
LSU forced a season-high 26 Razorback turnovers. Every Arkansas player had at least two miscues in the contest.

Notable
• Series Record: LSU leads 30-16.
• LSU snapped a four-game Arkansas run in the series.
• Jessica Jackson had her career-best season long double figure scoring streak snapped at 15 games when she scored six points against the Tigers.
• Arkansas had two keys to the game, one of which was to keep LSU out of the paint. The Razorbacks allowed only 18 points in the paint and only 10 second chance points in the game.
• The other key to the game was turnovers and the Razorbacks lost the turnover battle, 26-16, to the Tigers. Fourteen of the turnovers came in the second half.
• Arkansas is 27-13 in home games under head coach Jimmy Dykes. That includes an 8-3 record this season and a 10-8 record in conference home games.
• Arkansas has won the rebounding battle in 12 of 16 games, going 10-2 in those contests. The Razorbacks are 33-9 when they win the rebounding battle under head coach Jimmy Dykes.

Looking Ahead
Arkansas returns to the road, traveling to Texas A&M (Jan. 12) and Alabama (Jan. 15) for back-to-back road games next week. The Razorbacks return home on Jan. 19 for a matchup with Vanderbilt.