Two Razorbacks in Top 10 Thru 2 Rds at Stephens Cup

ROLAND – Thanks to three straight birdies in round two and a hole-in-one on hole two of the day, Mateo Fernandez de Oliveira and Juan Camilo Vesga, respectively, standing among the top 10 after day one and 36 holes at the inaugural Jackson T. Stephens Cup at the par-72, 7,400-yard Alotian Golf Club.

Fernandez de Oliveira briefly took the lead at -5 in round two after consecutive birdies on holes 8, 9 and 10. However, he dropped shots on holes 11 and 12. The junior rallied with a birdie on the par-5, 14th and reeled off four pars to end his day at -4 with consecutive rounds of 70 to tie for second.

Vesga is tied for ninth (75-72=147).  Starting on hole 10 in the first round, the redshirt freshman opened with a birdie and followed that with a hole-in-one, his seventh career ace. He finished round one with six bogeys for a 3-over-par 73. In round two, Vesga made the turn at 2-under thanks to a bogey and three birdies. Vesga carded eight straight pars but, in near darkness, suffered a double on the 18th hole to settle for an even-par round of 72.

The third and final round of stroke play is set for Tuesday. Match play will be contested on Wednesday. 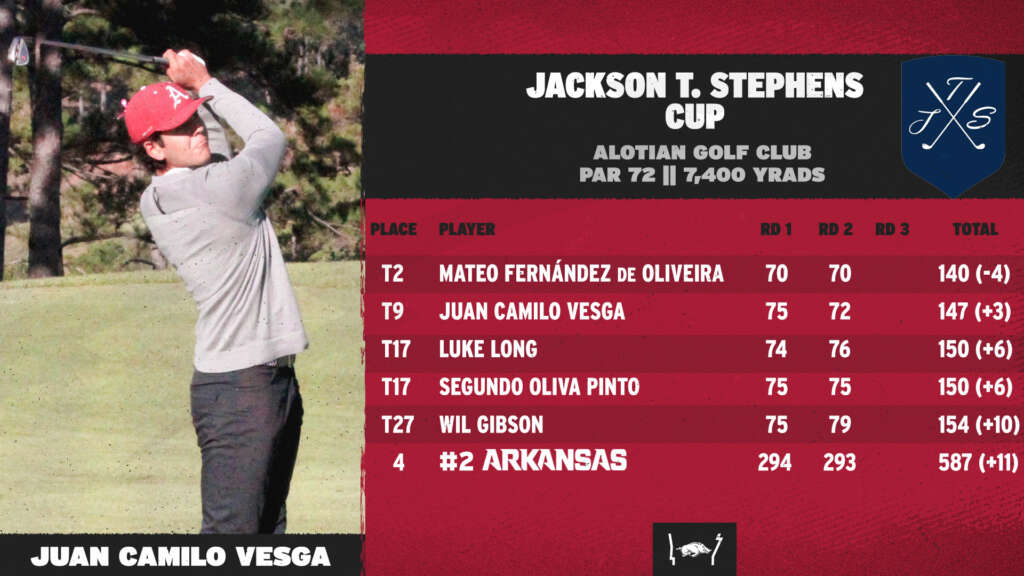