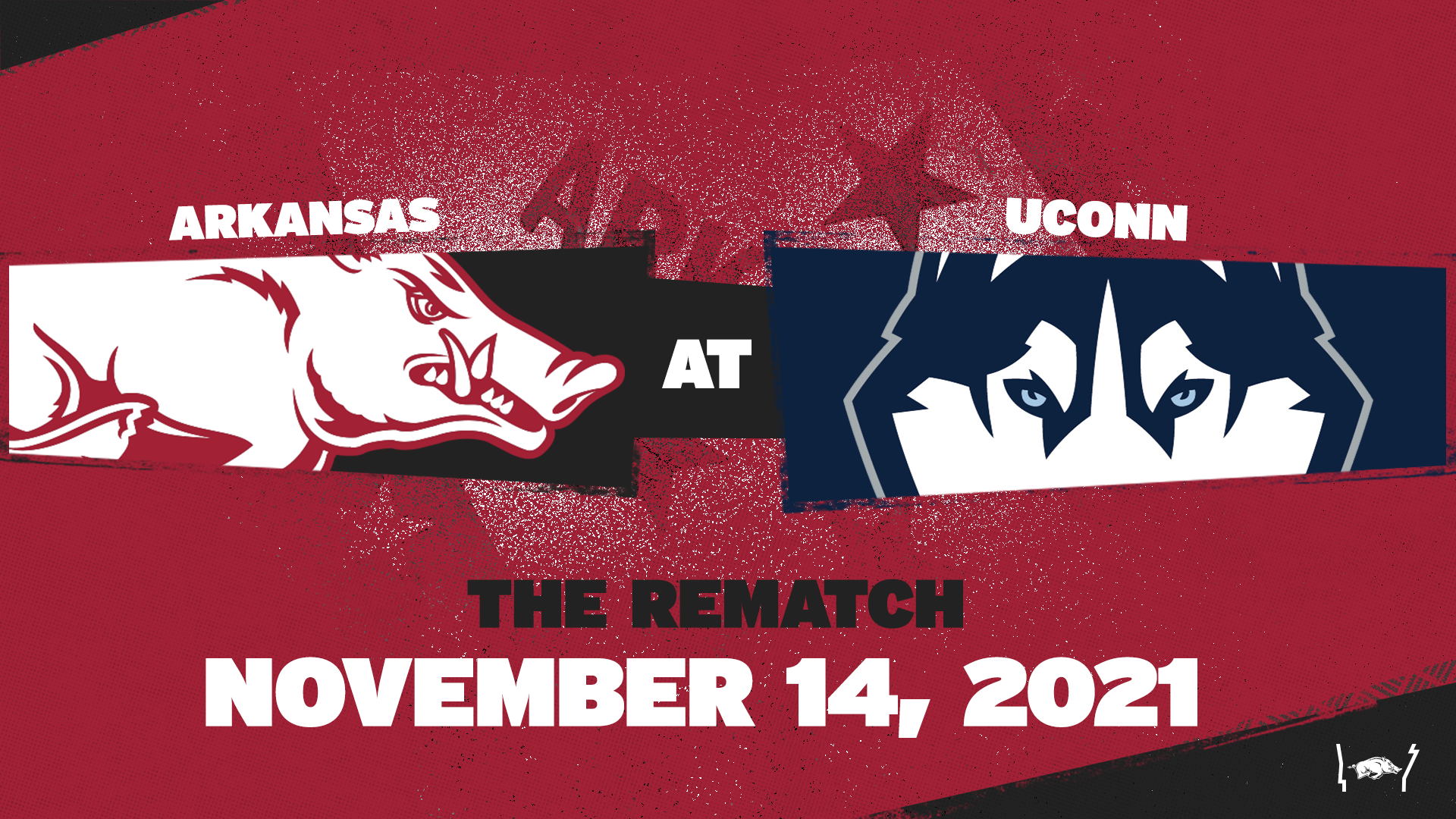 FAYETTEVILLE, Ark. – The anticipated rematch of Arkansas and UConn is officially set, Head Coach Mike Neighbors announced today, as the Hogs and Huskies will square off on November 14th. The game time, TV specifications and the game’s location (Gampel Pavilion or XL Center) will be announced at a later date. It will be the second matchup of the two squads during the 2021 calendar year, with the first coming in January, and it will be Arkansas’ first-ever road game against UConn. The first of the two matchups this year produced a historic result for Neighbors’ Razorbacks, as the Hogs toppled then-No. 3 UConn, 90-87, in Bud Walton Arena.

“UConn, on the road, early in the season, is something this team really needs,” Neighbors said. “We will have a couple of game experiences together before we go into a place all these players grew up watching on TV. It will be memorable for them in so many ways to see what 11 National Championship banners hanging in one spot looks like. You hope as a coach and team trying to reach that level of respect, that you can pick up small things that we can bring back home with us to Bud Walton as we keep trying to build our own program. It’s these kind of non-conference matchups that are important to our current players and future recruits, so we are honored and grateful for this opportunity.”

The matchup between the two programs will be just the third ever. The all-time series, following the Hogs’ win last season, is now all even at one victory apiece. UConn’s lone win in the series came back in 1998, when the Huskies beat Arkansas 100-64 at the “Four In the Fall” showcase in San Jose, California.

Arguably the greatest victory in program history, last January’s win for the Razorbacks was historic in several ways. With it, the 2020-21 Hogs became the first team in program history to notch multiple top five wins in the same season, as they also beat No. 4 Baylor earlier in the year. The Hogs’ 90 points against UConn was the most the Huskies had allowed in a single game since 2001. Arkansas also shot 52 percent from the field against UConn, the highest field goal percentage allowed since 2011.

Former Razorback guard Chelsea Dungee scored 37 points in the contest, the most points allowed to a single player by the Huskies since the turn of the century. Redshirt senior guard Amber Ramirez, who will be back this season, scored 22 points against UConn, including five threes. Makayla Daniels chipped in with 11 points, while Marquesha Davis added seven points, three rebounds and much needed defense against phenom Paige Bueckers off the bench.