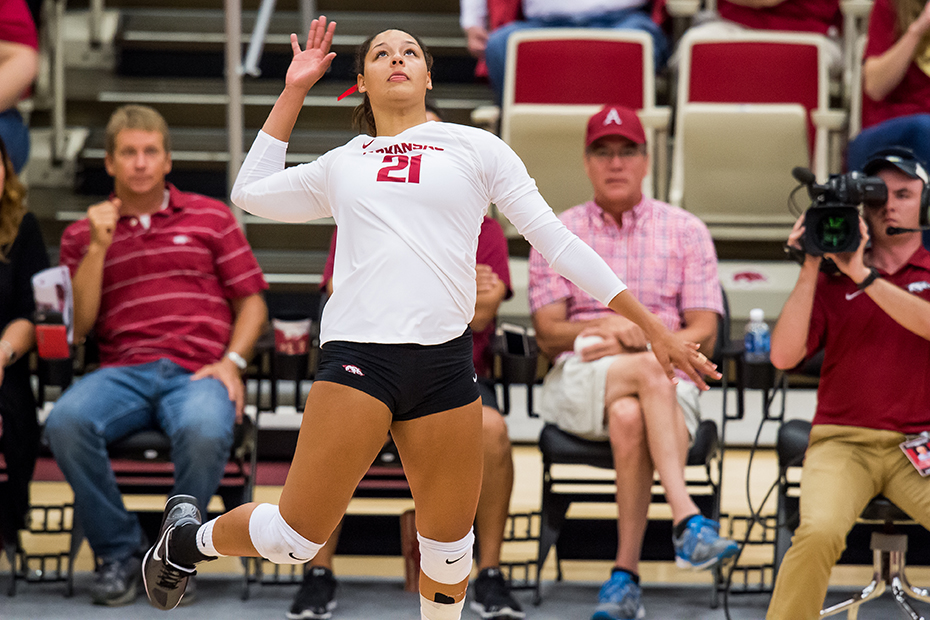 ATHENS, Ga. – With her 16th kill against Georgia, redshirt senior Pilar Victoria became the 16th member of the Razorbacks’ 1,000-kill club but the host Bulldogs posted a four-set victory Wednesday night at Stegeman Coliseum. Victoria put down a match-high 27 kills while freshman Hailey Dirrigl joined her in double figures with 14 kills. With the setback, Arkansas drops to 15-7 overall and 5-5 in SEC play.

Victoria is the first Razorback to reach 1,000 career kills since the 2011 season when Jasmine Norton and Kelli Stipanovich both hit the milestone. The Caguas, Puerto Rico, native secured her 1,000th kill at Arkansas with back-to-back kills that gave the Razorbacks a 14-9 lead in the third set. Wednesday’s match marked Victoria’s 12th performance of the season with 20 or more kills and sixth with at least 20 kills coupled with a 300 or higher hitting percentage; she hit .344 against Georgia.

Behind 50 assists from sophomore setter Rachel Rippee, the Razorbacks posted its seventh match of the year with a .300 or higher team hitting efficiency and third in the team’s last four outings. However, Wednesday marked Arkansas’ first loss when out-hitting its opponent. The team also got six kills from Fernanda Güitron and Elizabeth Pamphile who were error free in 12 swings apiece. Rippee now has 50 or more assists in nine matches this season.

In addition to her 14 kills, Dirrigl scored from the service line with a career-high four aces. She has at least one service ace in four-consecutive matches. Senior Krista Kolbinskie added three aces to match her career best and also led all players with 15 digs in the match. At the net, Kelly O’Brien tallied a team-high five total blocks. It was her seventh match of the year with five or more blocks.

Trailing by two sets and tied 9-all in the third set, the Razorbacks rattled off five-consecutive points to open a 14-9 advantage and force Georgia (15-8, 5-5 SEC) to call a timeout. The home team got no closer than three points throughout the remainder of the set and Arkansas won five of the last six points to take the third set, capping the frame with a Dirrigl ace followed by a Victoria kill.

After a back-and-forth start to the fourth, the score was tied 12-12 after a kill by Güitron. However, Georgia responded with a five-point run of its own, a surge that featured three aces. The Bulldogs finished the match with 11 service winners. Down five match points, Arkansas saved the first two with a kill by Victoria and a subsequent UGA attack error. On its third chance to close out the match, Georgia secure the four-set win with a kill off the Razorback block.

The Razorbacks’ next match is Sunday afternoon with a road contest at Ole Miss. First serve is scheduled for 1:30 p.m. at the Gillom Center in Oxford. Arkansas returns to Barnhill Arena next weekend for two home matches beginning Friday, Nov. 3 against LSU. All matches will be streamed live on SEC Network+ through the WatchESPN app.