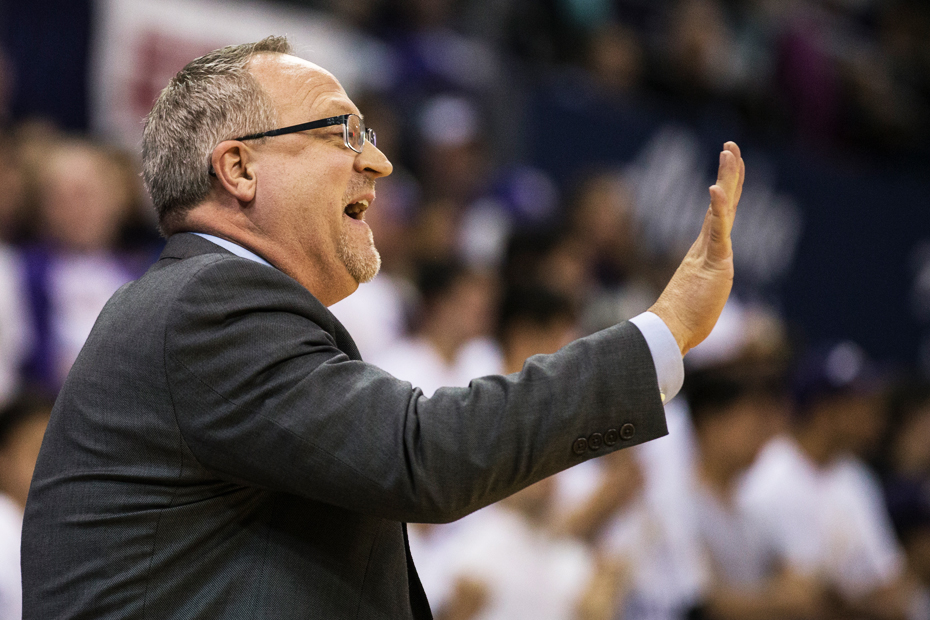 FAYETTEVILLE, Ark. – University of Arkansas Vice Chancellor and Director of Athletics Jeff Long has announced the hiring of Mike Neighbors as the ninth coach in Arkansas women’s basketball history on Monday. Neighbors returns to his alma mater after four seasons as the head coach at the University of Washington where he led the Huskies to their first-ever Final Four.

“I am excited to welcome Coach Neighbors back to his home state and back to his alma mater the University of Arkansas,” Long said. “It was vitally important to our search committee and to me that we attract someone who is entrenched in the women’s game and someone who has demonstrated the ability to connect with our young women on and off the court. Mike Neighbors has spent his career teaching, coaching and mentoring young women dating back to his time as a high school coach in Arkansas. He is a member of an elite group of coaches who have taken a team to the Final Four and that is the kind of leader we need in the strongest conference in women’s basketball. I know that Mike’s energy and excitement about being a Razorback will inspire our student-athletes and our fans.”

Neighbors guided Washington to four seasons of unprecedented success, highlighted by the 2016 NCAA Final Four and two NCAA Sweet 16 appearances. Named the program’s head coach after two years as an assistant, Neighbors led the Huskies to a 98-41 record that was fueled by three consecutive 23-plus win seasons and included four postseason appearances (3 NCAA, 1 WNIT).

“I feel like everything that I have done in my career has prepared me to be the head women’s basketball coach at the University of Arkansas,” Neighbors said. “As a native Arkansan, I understand how special our state and the University are. There is only one Razorback and I’m excited to be able to put that logo on my chest and represent our institution and our state across the country.

“Arkansas is a special place.” Neighbors continued. “We have all the resources in place to be successful on the court and more importantly, to foster the growth and development of the young women who come through our doors.”

Entering the 2016 NCAA Tournament as a No. 7 seed, Neighbors led Washington to victories over No. 10 seed Penn, No. 2 seed Maryland, No. 3 seed Kentucky and No. 4 seed Stanford before squaring off with Syracuse in the national semifinal.

It was a drama-filled run as Washington had to use fourth quarter heroics to top Penn, 65-53, behind a 23-point effort in the final frame. On the road at Maryland, the Huskies secured the upset with a 32-point performance from Kelsey Plum. The back-and-forth contest saw Neighbors captain Washington on a 16-2 run erasing a seven-point deficit late in the third quarter to hold on to the win.

Plum’s long list of postseason accolades this season includes becoming the first player in Pac-12 Conference history to be named The Associated Press’ women’s college basketball Player of the Year. Along with being named to the WBCA Coaches’ All-America team, Plum has also won the Ann Meyers Drysdale Award, the Nancy Lieberman Award as the best point guard and the Dawn Staley Award.

Plum recently added a Wooden Award All-America selection this week and is one of five finalists for the 41st Annual John R. Wooden Award that will be presented at the ESPN College Basketball Awards on Friday, April 7.

Neighbors was hired by Xavier head coach Kevin McGuff prior to the 2007-08 season. He served as McGuff’s assistant at Xavier through the 2010–11 season, helping the Musketeers produce a 108–22 record over that span. Over those four seasons, Xavier won the A-10 Conference Tournament three times, made the NCAA Tournament each year and advanced to the Elite Eight in 2010. Neighbors was selected as one of the best assistant coaches in the country. He was chosen as one of five recipients for the BasketballScoop.com and ONS Performance Rising Star award.

While with the Musketeers, Neighbors developed Amber Harris and Ta’Shia Phillips, two of the best players in program history. Harris was a two-time State Farm All-America selection and was drafted fourth overall by the WNBA’s Minnesota Lynx. Phillips, who was taken eighth overall in the 2011 WNBA Draft, was considered one of the premier defensive players in the nation and finished her career as the leading rebounder in program history.

A native of Greenwood, Ark., Neighbors received his bachelor’s degree from the University of Arkansas in 1993. Following his graduation, Neighbors was a director of basketball operations for the women’s basketball program, serving under legendary coach Gary Blair, who won the NCAA Championship in 2011 with Texas A&M. Before moving into the collegiate profession, Neighbors was a highly successful head coach in the Arkansas girls’ high school ranks. His most notable achievement was taking a 1-24 Bentonville team to the State Championships two years later.

Neighbors has two children, a daughter Abby and a son Alec.