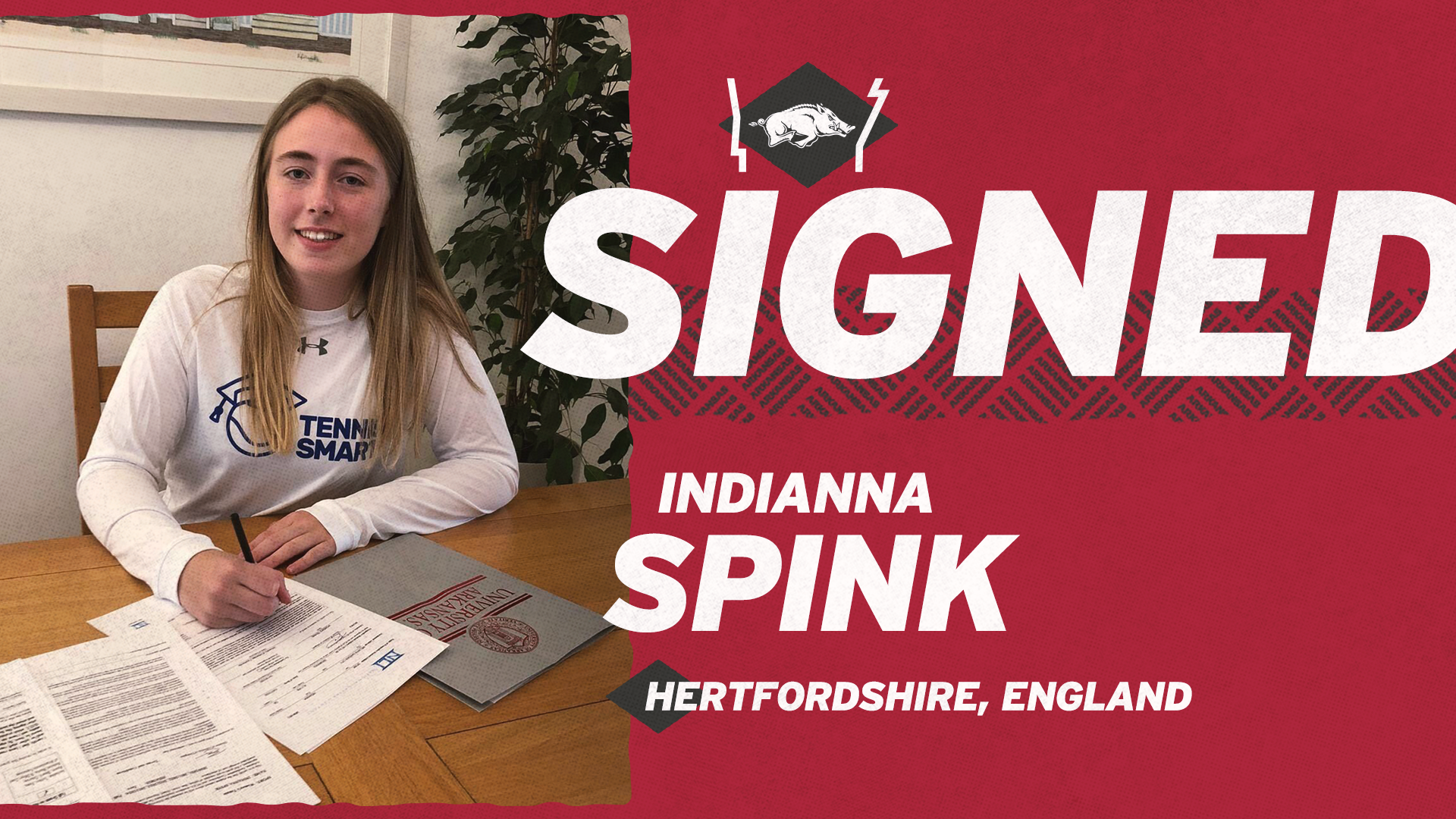 Spink has had a successful junior tennis career proving herself on the highest stage, both nationally and internationally. Her success from a very early age was immediately recognized by the British tennis governing body (The LTA). Spink earned the privilege of representing Great Britain beginning at age 11 in the European winter and summer cups as well as multiple friendly matches, including a head-to-head vs. the USA.

The Hertfordshire, England native, holds multiple national championships to her name. During the 2014 European Summer Cup, Spink was selected as the Player of The Tournament and that same year, she won the U12 singles title and then in 2016, she went on to claim the U14 singles and doubles national championship titles.

“I’m excited to welcome Indianna to this special place and even more excited about her becoming a Razorback,” women’s tennis head coach Courtney Steinbock said. “I look forward to helping her continue to develop and grow in all areas of life as she pursues her goals both on and off the court. Indi has such a tremendous upside to her tennis so we’re really excited about her potential. She will make an immediate impact within this team as she possesses the traits we value in our program. Her love for the game, her work ethic, and her desire to learn and compete in academics and tennis is exactly what we’re looking for in our athletes. I can’t wait to get started working with her and the rest of the team.”

In 2017, Spink was chosen to represent England at the Youth Commonwealth Games in The Bahamas, snagging a bronze medal for her incredible run in the singles draw.

During the summer of 2018, she won back-to-back doubles titles in the Nottingham ITF tournament series as well as reaching the semifinals in singles at the ITF Junior T.C. Carthage tournament in Tunisia. Later that year, she went on to reach another singles semifinals at the Wirral Junior International Liverpool. Spink finished the year ranked No. 388 in the world.

In 2019, she competed in the highly prestigious and world renowned, Junior Wimbledon Championships. She defeated ITF ranked No. 16 Dana Guzman from Peru 7-5, 6-3. In the qualifying draw, Spink fell in an incredibly close 7-5, 7-5 battle to the 80th-ranked ITF player, Amarissa Toth from Hungary in the final round of qualifying.

Spink transitioned to the women’s tour and showed promising results in the open national level. After reaching multiple R16s on the British Tour, she finally snagged her first finalist appearance in the women’s open doubles event in Sutton. The next week, she traveled to Cumberland and finished the summer winning the women’s open singles championship, defeating former No. 627 WTA ranked, Suzy Larkin 3-6, 6-4, 6-4 in the final.