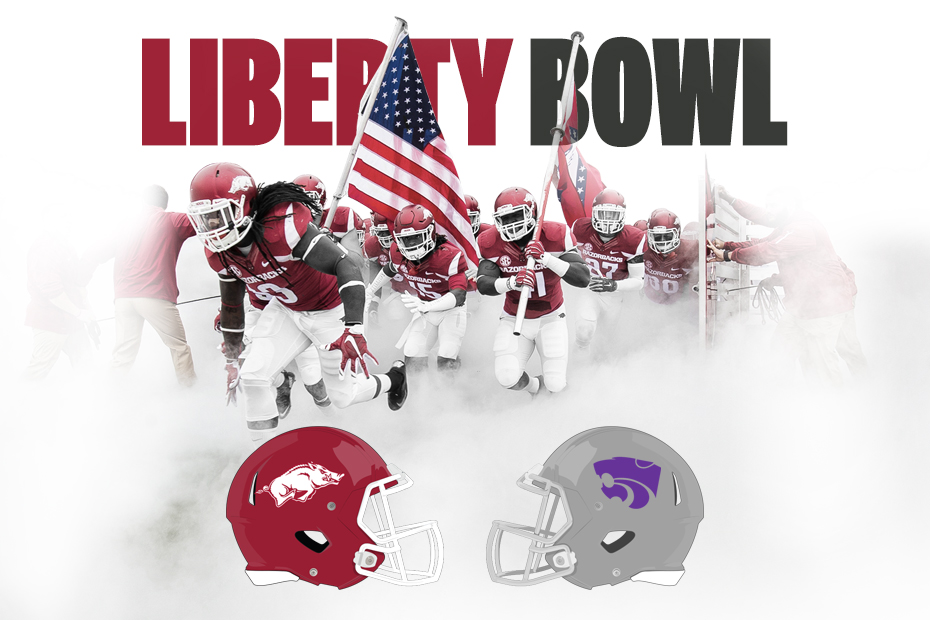 FAYETTEVILLE, Ark. – The University of Arkansas has accepted an invitation to play in the AutoZone Liberty Bowl, the school and the Southeastern Conference announced Sunday. Arkansas (7-5) will face Kansas State (6-6) on Saturday, Jan. 2 at 2:20 p.m. The game will be nationally televised on ESPN live from Liberty Bowl Memorial Stadium in Memphis, Tennessee.

For the 20th time in school history, Arkansas is playing in a bowl game in back-to-back seasons. This will mark the school’s 41st bowl appearance and fifth in the Liberty Bowl. Arkansas is 1-3 all-time in the game and posted a 20-17 overtime victory against East Carolina on Jan. 2, 2010.

“On behalf of our coaches, student-athletes and administration, we are very excited to accept the bid to play Kansas State in the Autozone Liberty Bowl,” said head coach Bret Bielema. “To be able to play a quality Big 12 team that has special interest close to my heart from my time with Coach Snyder is a great opportunity. Our student-athletes are excited to go to Memphis and have the chance to close this season out on a high note in front of a what I’m sure will be a fired up crowd of Razorback fans.”

Arkansas will play Kansas State for the sixth time in program history and just the second meeting in the past 45 years. The two teams met in the Cotton Bowl on Jan. 7, 2012 when No. 7 Arkansas defeated No. 11 Kansas State, 29-16. The Razorbacks also beat the Wildcats in Little Rock in 1967 but Kansas State leads the all-time series with a 3-2 mark.

“We look forward to returning to the AutoZone Liberty Bowl to once again represent the Southeastern Conference in Memphis,” Vice Chancellor and Director of Athletics Jeff Long said. “The University of Arkansas has a storied history in this classic game. Through the years, our fans have been tremendous supporters of our team at the Liberty Bowl and we look forward to another large Razorback following this year. Congratulations to head coach Bret Bielema and his staff and team on earning this invitation. We look forward to the game and an opportunity to compete against an outstanding institution from the Big 12, Kansas State University.”

The Arkansas coaching staff has several ties to Kansas State, beginning with head coach Bret Bielema, who served as Kansas State’s co-defensive coordinator under head coach Bill Snyder in 2002 and 2003. Bielema names Snyder as one of his mentors in the profession. Arkansas wide receivers coach Michael Smith played and coached for Snyder at Kansas State and is still ranks fourth in school history in career receptions (179) and receiving yards (2,457). Director of Recruiting E.K. Franks served in multiple coaching and support staff positions at Kansas State from 2000 to 2003.

“The University of Arkansas, under their outstanding coach Bret Bielema, is one of the hottest teams in the country,” Steve Ehrhart, executive director of the AutoZone Liberty Bowl said. “The Hogs have proven they know how to finish the season strong and we are very excited they will finish their outstanding season in the AutoZone Liberty Bowl. Vice Chancellor and Director of Athletics Jeff Long is one of the most outstanding collegiate leaders in the country and we look forward to welcoming Arkansas’ new Chancellor, Dr. Joseph Steinmetz, who will begin his appointment on January 1, the day before the game.”

Tickets to see the Razorbacks in the Liberty Bowl are available now by clicking here. Due to the likelihood of a high volume of calls, fans are strongly encouraged to order tickets online.

Fans can reach the Razorback Ticket Center by phone at 1-800-982-HOGS (4647) from 7-9 p.m. on Sunday evening.  The Ticket Center will also be open extended hours Monday-Friday (Dec. 7-11) from 8:30 a.m.-6:00 p.m. Ticket requests will be taken until Friday, Dec. 11 and then orders will be fill based on Razorback Foundation priority guidelines.

For more information about the game and other Liberty Bowl activities, please visit the Arkansas Bowl Central page at http://bit.ly/HogBowlCentral.