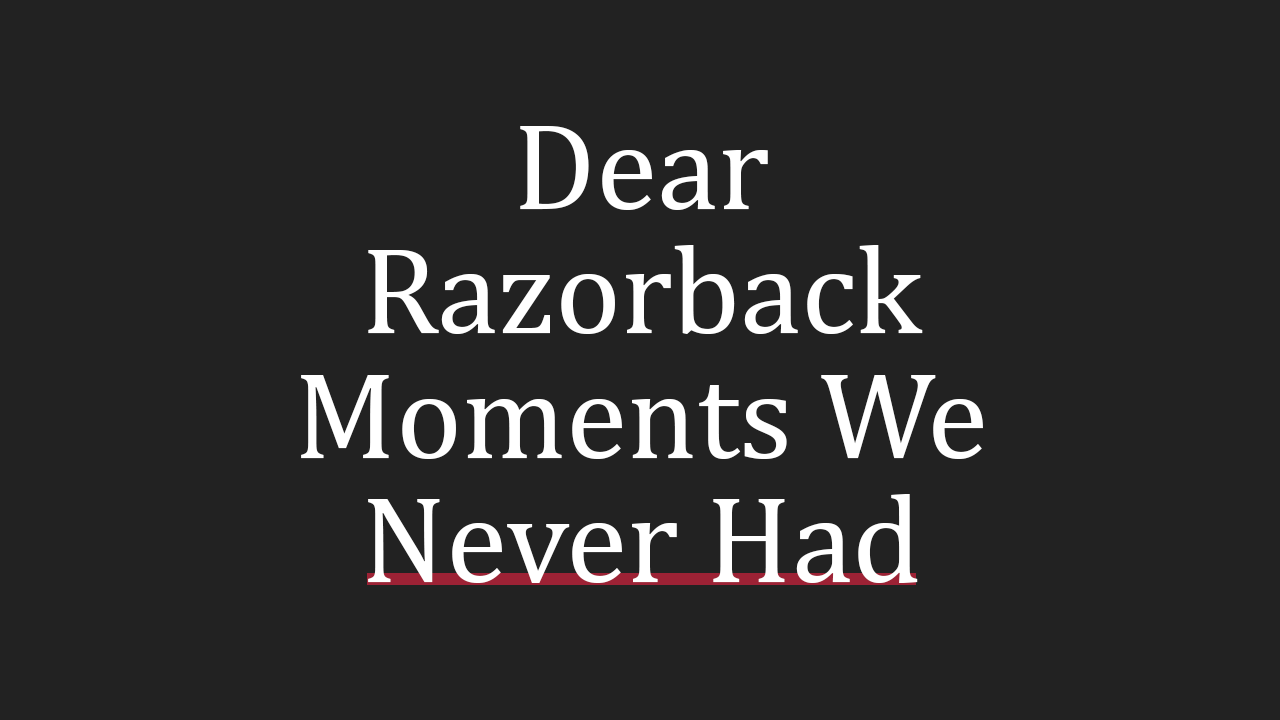 A Message to the Memorable Razorback Moments We Never Had

It has been more than a week since the balls stopped bouncing, the bats were returned to the rack and the bright lights of scoreboards melted away to darkness. On the surface level our minds understand the reasoning. We are in the midst of a World Health Emergency. People in our state, our nation and around the world are sick and some are even dying. We still have challenging times ahead.

At this extraordinary time, we have put the health, safety of wellbeing of ourselves, our families and fellow members of our community at the forefront. That is what is the most important. Thanks to the leadership of many, including Southeastern Conference Commissioner Greg Sankey, our Chancellor Joe Steinmetz and our Director of Athletics Hunter Yurachek, we have aligned our focus with those essentials.

Accordingly, sports, even those contested by our beloved Razorbacks, have been put on hold for the rest of the competitive year. Just one determination, in a litany of decisions made during the past few weeks, a period of time that has ticked away more slowly than the dwindling clock at Bud Walton Arena with a one-point Arkansas lead.

You see, well-being is more than just a physical proposition. After all, in Arkansas, nothing feeds the soul quite like the Razorbacks. It is ingrained in those raised here and infused into those who embrace it when they arrive from all corners of the world. Nothing brings us together like it – whether in the jubilation of victory or the stinging pain of defeat. It is ours. We share it together.

So perhaps that is part of the reason some of us are having such a hard time coming to grips with the sudden end to so many of the storylines we looked forward to experiencing together:

That is what has been taken from us – the fulfillment of so many what-ifs and seemingly endless possibilities. Moments that could and should have been, but now will no longer be.

However, if you think we as Razorbacks are going to let those lost moments and opportunities, define this competitive year, you clearly don’t know who we are! By our very nature, Razorbacks are hard-nosed, gritty and resilient. Just look at our history. We have overcome so much to achieve amazing things.

And, so as the history of this competitive year is written, it will be these triumphant moments, among others, that will define us:

Those are the moments, the ones we have gained, not those we have lost, that will endure and remain etched in the hearts and souls of Razorback Nation. There is no doubt that COVID-19 and its impact will always be a footnote in our history. But that is where it will remain, a footnote.

We celebrate all that we enjoyed together and now we must turn the page to what is next. Coach Sam Pittman has brought revived optimism to our football program. We look forward to seeing what Coach Pittman, his staff and our team can do once they return to the field. Soccer and women’s cross country will be looking to defend SEC titles in the coming year. Men’s cross country will be looking to build on the momentum from an indoor title. Volleyball will look to take another step in its continued growth.

What will the new year bring? We can’t be quite sure on or off the field. And while the unknown is a daunting proposition in many respects of our lives at the moment, when it comes to the Razorbacks, the promise of things to come is what we remain focused on.

Until then, we say goodbye to those moments that have gone even before they came. Yet, we eagerly anticipate those memorable moments in the near future that will have Razorback fans together again, standing in unison to Call those Hogs!

Razorback Road is a column written by Senior Associate Athletics Director for Public Relations and Former Student-Athlete Engagement Kevin Trainor. Trainor is a graduate of the University of Arkansas and has worked for Razorback Athletics for more than 25 years.