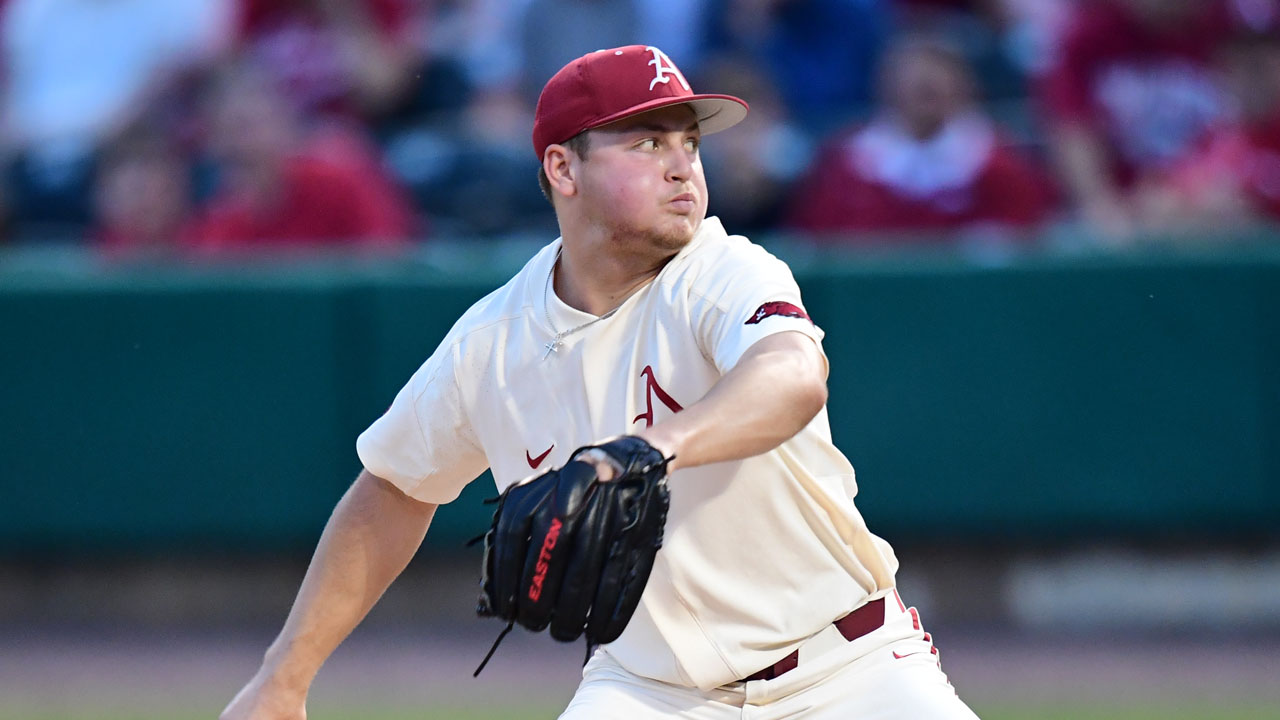 Aggies Even Up Series With Razorbacks

COLLEGE STATION, Texas – Fourth-ranked Arkansas got off to a slow start Friday night in Blue Bell Park, struggling to string hits together against the 17th-ranked Texas A&M pitching staff before falling, 6-2, and evening the three-game series with a rubber match set for Saturday.

Arkansas (40-14, 20-9 SEC) drops its third game in its last six and with the Mississippi State victory earlier in the night, the Hogs and Bulldogs are now tied atop the SEC Western Division with one game to play.

Aggie lefty John Doxakis had a great outing against Arkansas, holding the Hog hitters to just two runs, both off a home run in the fourth inning, five hits scattered and eight strikeouts. Even after Texas A&M (35-19-1, 15-13-1 SEC) went to the bullpen, the Razorbacks continued to struggle to put the bat on the ball, striking out 15 times, their second-straight game with 10 or more strikeouts.

Arkansas’ best chance to tie the game came in the sixth inning as Doxakis was struggling in what would be his final inning of work. The Hogs got their first three batters on base via two singles and a fielding error and was sending the go-ahead run to the plate.

Unfortunately, Doxakis struck out his final two batters of the night in Christian Franklin and Casey Opitz and then Texas A&M’s first man out of the bullpen, Bryce Miller, struck out pinch hitter Jordan McFarland to end the inning and leave the bases jammed.

The Razorbacks never had the lead in Friday’s game as Texas A&M got solo home runs from each of its first two batters of the game off freshman Patrick Wicklander. The two-run lead became a four-run lead after a Braden Shewmake two-RBI double, his second extra-base hit in as many innings. Wicklander’s night was finished two batters later as he was relieved by sophomore Kole Ramage.

It was Wicklander’s shortest outing of the season in a starting role as he went 1.2 innings, giving up four runs on three hits with two strikeouts. However, Ramage was very strong out of the bullpen, holding the Aggies to just two runs on three hits over 4.1 innings with five strikeouts. The 4.1 innings was his second longest this year and the five strikeouts tied for the second most as well.

Offensively, Heston Kjerstad and Jack Kenley combined for five of Arkansas’ eight hits in the game. Kjerstad went 3-for-4 with a run scored, while Kenley went 2-for-4 with his two-run home run the only run-producing hit of the night. Kenley has been on a tear with the bat lately, hitting three home runs in his last four games and seven RBIs. His home run tonight was his 12th of the year and the first long ball given up by Doxakis this season.

As for Kjerstad, he now has 10 games with three or more hits this year and is on a five-game hitting streak. He’s got nine hits over the last five games, but has only driven in two runs during that stretch.

Up Next
Arkansas will conclude the 2019 regular season on Saturday against Texas A&M with a rubber match scheduled for 11 a.m. at Blue Bell Park. The game time was originally set for 2 p.m., but was moved up to an earlier time due to potential inclement weather later in the day. The game will be broadcast online only via SEC Network+.