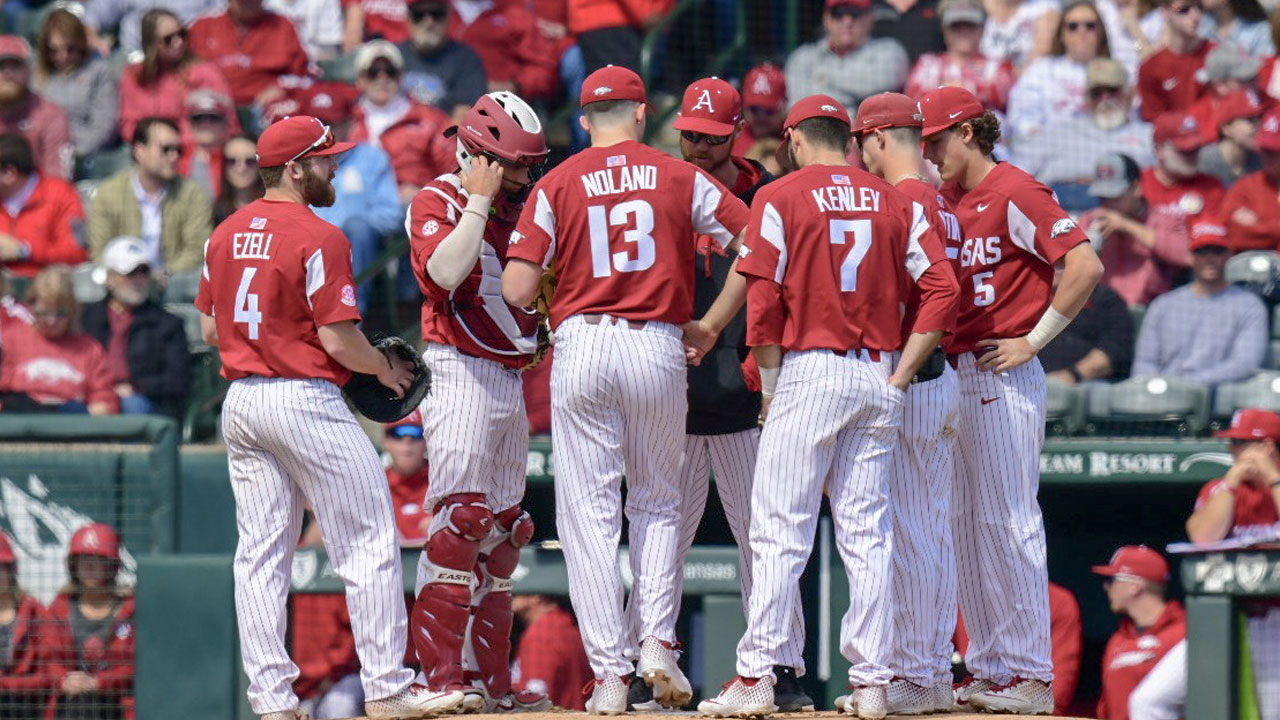 TUSCALOOSA, Ala. – The Alabama Crimson Tide forced a rubber match in their three-game series with the Arkansas Razorbacks on Saturday, as Arkansas hitters were held to only four hits in a 10-0 shutout loss at Sewell-Thomas Stadium.

Casey Martin, Dominic Fletcher, Trey Harris and Jacob Nesbit each tallied a hit in the defeat, but the Hogs could not get a baserunner past second as Harris had the only extra-base hit in the contest.

It’s Arkansas’ first conference loss of the year and first time it has been shutout since Game 3 of the College World Series Finals against Oregon State last season. It’s also the first time the Razorbacks have been shutout by the Crimson Tide since a 5-0 loss in Tuscaloosa, Alabama during the 2013 season.

Nesbit was able to keep his team-best hitting streak alive as he upped it to 13 games with a fifth-inning single, while also extending his reached base streak to 20 games. Since his hit streak began on March 6 against Charlotte, Nesbit is hitting .463 with 19 hits, 13 RBIs, 10 runs scored and is slugging .610 with a .489 on-base percentage. Nesbit also continues to lead the team overall with a .356 batting average for the year.

The Razorback pitching wasn’t able to slow the Tide offense either as it allowed three runs in the second inning and six runs in the sixth before the final run came in during the eighth inning. It’s just the second time an opponent has scored 10 or more runs on Arkansas this year (12 – Louisiana Tech, March 9, 2019).

Starting pitcher Connor Noland lasted only 1.2 innings, his shortest start of the year, as he gave up all three runs in the second inning before giving way to Kole Ramage out of the bullpen. Saturday was Noland’s first decision of the year, dropping his record to 0-1.

Ramage was good out of the bullpen, retiring the first 10 batters he faced and seemed to be keeping the Hogs in the game, but he gave up three-consecutive hits to start the sixth which was the start of a string of eight-straight batters that reached base before Arkansas recorded an out.

Patrick Wicklander, Zebulon Vermillion, Liam Henry and Collin Taylor all followed Ramage out of the bullpen. Vermillion and Henry both came away with more of the more effective outings as both pitchers held Alabama to no runs in the seventh and eighth innings.

Razorback Quotables
“We spotted them a three-run lead in the second inning and we missed some pitches. We hit a couple of balls hard and had a few line outs with runners on first and third, but we had that bad hop play at third at the end of the second inning when we had only given up one run. There wasn’t much he could have done about it. We just got off to a bad start on the mound. Our starting pitcher was behind, he didn’t have his breaking ball today and wasn’t spotting his fastball. They (Alabama) were hitting a lot of balls hard. They kind of took it to us, offensively.” – Dave Van Horn on Saturday’s loss to Alabama

“We just have to learn from what happened today. You can think about it for a while and then just move on to the next day. That’s what you have to do in this league. Nobody is going to give you anything. You have to take it. We’re on the road and tomorrow is a Sunday game. It’s going to be a tough game for us; we have to play perfect to win tomorrow.”  – Dave Van Horn on how to learn from today and prepare for a rubber match on Sunday

Up Next
Arkansas will send redshirt junior Cody Scroggins to the mound on Sunday as the Razorbacks will try to take its second-consecutive series to start SEC play. Scroggins hasn’t given up a run in his last 11 innings and struck out 18 during that span. First pitch from Tuscaloosa is set for 1 p.m. and will be broadcast on SEC Network+.