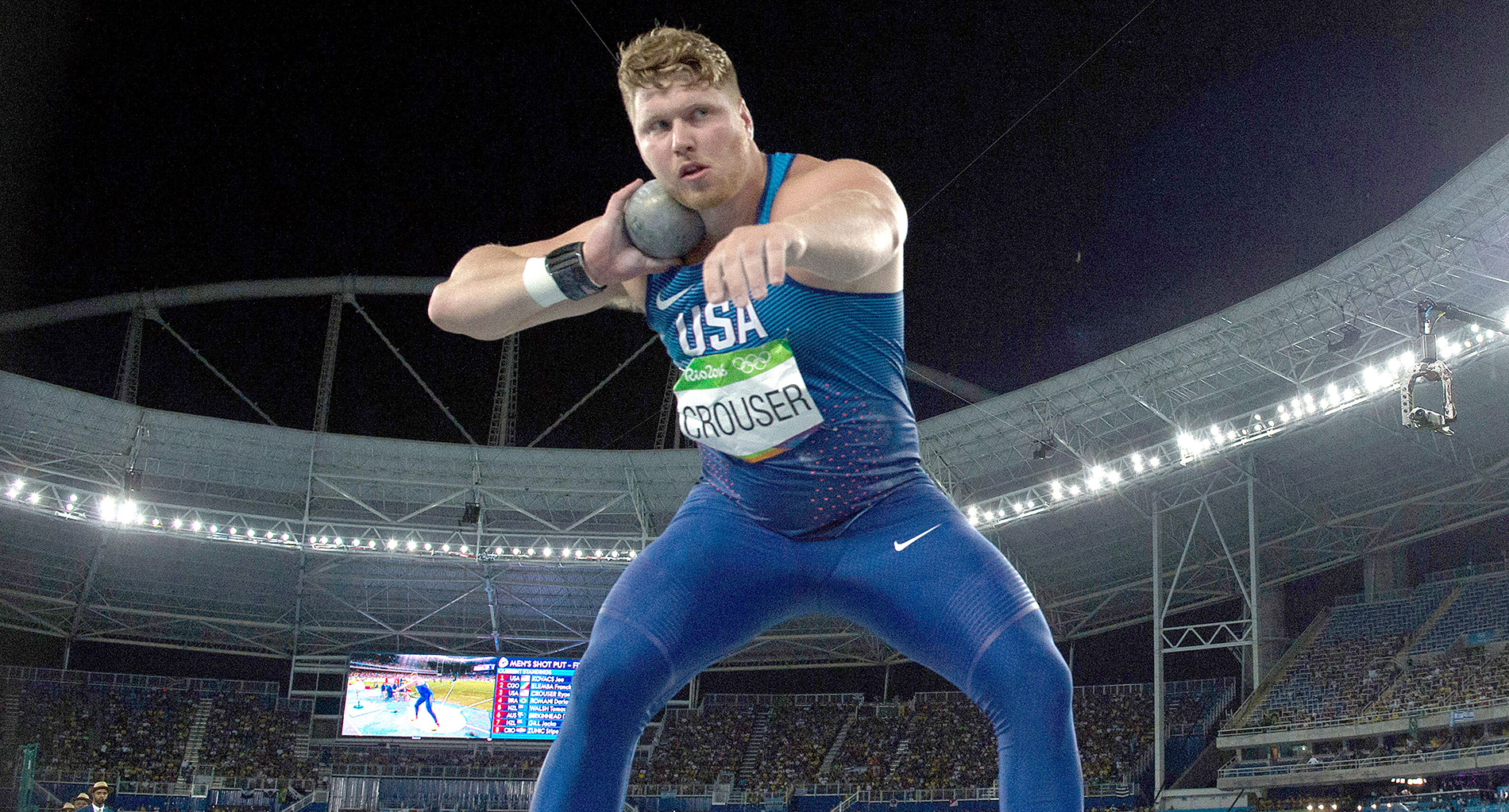 A season in which major championship meets scheduled for 2020 were postponed due to the coronavirus, defending Olympic gold medalist and Olympic record holder Ryan Crouser found solace in an extended training cycle during the spring and early summer, perfecting his craft as a world class shot putter.

Another change heading into this season was joining the Razorback track and field program as a volunteer assistant coach.

“When I first got here, I talked to him about coming here and volunteering and training,” noted Sategna, former head coach at the University of Texas when Crouser collected four NCAA shot put titles and set an indoor collegiate record. “But he still had stuff set up at the Training Center.

“When he decided this year to make the move, I thought how awesome that was because he could have gone anywhere. For him to come here, especially at that point when it was the Olympic year, that’s a huge thing.

“I think it goes back to our years of being able to work together. His dad, Mitch, is also a huge part. Any video I take during a training session I’m sending his dad the videos. Then we talk frequently, and he and Ryan talk pretty much every day.”

With limited opportunities to compete in the shot put since March, Crouser has turned to bass tournaments as an alternative way to be competitive.

“It’s been good as far as making the move, I’ve really enjoyed Fayetteville,” stated Crouser. “The biggest thing recently is I’ve been doing bass tournaments pretty consistently every week at Beaver Lake. That kind of helped me keep my sanity during a lot of this early summer and up until now.

“It’s been fun to get out there and compete in that sense, it’s another outlet for competition. So, that’s been a lot of fun. I’ve placed a few times and made some money. It’s been fun to take my competitive skills outside of track and field as well.”

Sategna noted: “With Ryan being from Oregon, he grew up an avid fisherman. When he moved here he bought a bass boat. On some Friday evenings we adjust our training schedule since he enters bass tournaments out here on Beaver Lake. You need to have something outside of track and field.”

“That was a really quick turn around for me to be able to throw 22.60 in my off-season conditioning training block. That was a really good indicator. Unfortunately, then we didn’t have any meets in the early outdoor training season.”

Sategna added: “If this would have been a normal year we would have had the World Indoors, which for a shot putter would have been a great tune-up during the indoor season leading to the outdoor and ultimately the Olympic Trials and then defending his Olympic title.”

Instead of traveling to the World Indoor Championships, which were scheduled for mid-March in Nanjing, China, Crouser built his own portable shot put ring out of plywood, complete with a toe board, and returned to an off-season training regime.

“It was a big change, but I’ve used it to the best of my ability to prepare myself physically to have a better 2021.”

Joining Crouser in the extended training session was Razorback hammer thrower Erich Sullins, who is in his first season as a professional.

“It’s been great for Ryan to have someone like Sullins to train with,” said Sategna. “It’s helped Sullins tremendously in the hammer, but I think he’s a great training partner for Ryan.

“We were very fortunate that we had a weight rack in our garage, so I see Ryan throughout the week, sometimes twice a day if we have a technical session and then come back to lift later in the day. Some days they will lift first and then throw in the evening.”

“Once we made that decision, and stopped trying to micro program our training, we committed to a large training block. That included a lot of lifting, but it has been kind of limited. We’ve been in the garage with a lifting rack so we can do squats, bench, some clean poles and snatches.”

With a couple of meets in the Atlanta, Georgia, area in July, Crouser continued his pursuit of personal best throws. The first meet, held July 11, produced a win with a toss of 71-9 (21.87) as he adjusted from his plywood training surface to a normal concrete surface.

“For the longest time my throwing was at an elementary school (Holcomb) off a sheet of plywood,” Crouser said. “I did that since the time facilities closed in March until some of the middle schools and high schools opened facilities recently for football practice.

“I was throwing on plywood for so long, and it’s a really fast and unforgiving surface. I got comfortable on that and that helped me build a foundation. The first time I was on concrete was at a meet in Atlanta, and that was the first time since the quarantine started. So, it took me that first meet to kind of adjust.”

“Once I made the adjustment it became more comfortable to throw on concrete again,” noted Crouser. “Then I threw 22.91 at the second Atlanta meet.

“Now, since I’ve been back after those two competitions, I’ve been able to throw on concrete again. It feels good getting comfortable on that. The combination of being able to train on concrete along with the technical foundation and the strength base I was able to build in this off season has really set me up well. I’m really excited to just get out there and compete again.”

The next opportunity will come later this month at the Blue Oval Showcase hosted by Drake University in Des Moines, Iowa, on August 29. Last summer, Crouser captured his third USATF Outdoor Championship in the Drake Stadium venue with a mark of 74-2 ½ (22.62).

“I feel like I’m in shape to throw another PR,” Crouser stated. “I think if I get it all together, then I have a really good chance to throw the world record now. But for me it’s always about throwing a PR, that’s always the goal. If I can keep getting that closer and closer, then eventually I’ll get that world record.”

The extended off-season training time frame these past few months have enabled Crouser to develop a keener sense what is needed in each training and lifting session.

“It’s just amazing to watch,” Sategna said. “He does a great job, and he’s so meticulous on every little detail when it comes to his throwing. How he is throwing the 18-lb. ball and throwing the 16-lb in training has been impressive.

“A big thing for him this year is paying attention to detail and not trying to overdo things, not only when he is throwing but also when he is lifting. He knows his range, but he also knows at this stage of the game how to read his body. If it means shutting it down for the day or limiting the number of throws or sets, then he is going to do that.”

In a year of adjustments, which included moving to Fayetteville, Crouser has maintained his focus and competitive edge to be the best in the world.

“We’re excited and I’m glad we’ve been able to make things work, not only when things were normal, but now given the pandemic,” said Sategna. “When we are throwing at a middle school, or on a parking lot with a portable ring he built, he hasn’t missed a beat. I think it speaks volumes, not only for what he might be able to do the remainder of this year, but over the next five or six years.

“If this was a normal year, even without the Olympic Games, he would be doing some wonderful things. I’m just hoping he gets the chance and opportunity to hit a few more meets. Based on what I’ve seen in practice, he’s going to set the world record and not just by a little bit. If he really lines some things up he can put something phenomenal out there.”

s = mark made in series