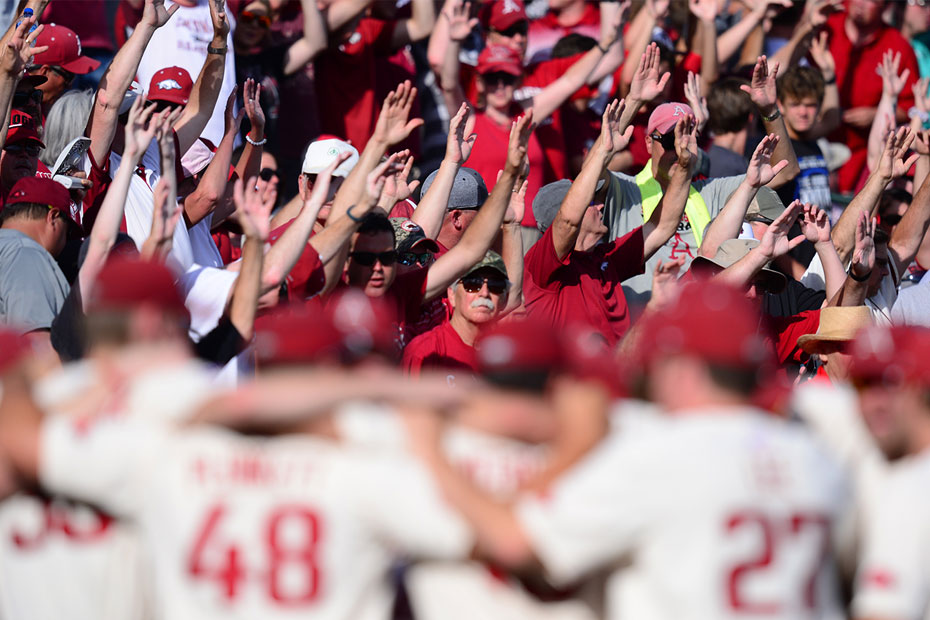 FAYETTEVILLE, Ark. – The Arkansas baseball program on Wednesday released its 2019 schedule, which features a 35-game home slate, including a great SEC schedule with games against Missouri, Ole Miss, Mississippi State, Tennessee and LSU.

Arkansas head coach Dave Van Horn enters his 17th season at the helm of the baseball team and is coming off his best season as the head Hog as he guided the Razorbacks to their ninth College World Series and a national runner-up finish for the second time in school history.

Arkansas finished 2018 with 48 wins, the most in a season under Van Horn, and hosted its seventh NCAA Regional and third Super Regional in school history at Baum Stadium.

“We have a really good schedule this season, especially when you look at the teams that are coming into Baum Stadium,” Arkansas head coach Dave Van Horn said. “Last year was a testament to what a quality schedule does for a team throughout the year. I don’t think this year is going to be any different. We have 25 games against teams that were in the NCAA Tournament last year and nine against teams that either won their conference outright or won their conference tournament. It’s a good schedule and is only going to make us better”.

“It’s exciting to have Little Rock and Arkansas-Pine Bluff as part of our 2019 non-conference schedule,” Van Horn said. “It’s going to be great for the game of baseball in our state. Baseball has improved so much at the high school level in the state of Arkansas. I continue to see it every year when we’re recruiting. We see more Arkansas kids coming out of the state and they’re a big part of our program. I think this will help grow baseball. The fan interest is there and it’ll be big. I know after talking to Coach (Chris) Curry and Coach (Carlos) James, they’re both very excited to have the opportunity to play at Baum Stadium in Fayetteville. We’ll have a really good crowd. It’ll be good for all our teams to play in that type of environment.”

“As the flagship institution within our state, this is an opportunity for us to enhance interest in our non-conference schedules while supporting other schools within the University of Arkansas system,” Vice Chancellor and Director of Athletics Hunter Yurachek said. “We have initiated with baseball this year and are exploring opportunities for future years in other sports. I appreciate Chancellor Steinmetz and his support to move forward with this engagement of our sister institutions. While I know that this announcement will generate additional speculation, there are no plans to expand in-state scheduling beyond those schools affiliated with the University of Arkansas system.”

Razorbacks vs. Missouri – March 15-17
The Hogs will open the SEC portion of its schedule against the Missouri Tigers, capping off a 14-game homestand, the longest of the year. Arkansas didn’t face Missouri last year as part of its inter-division rotation, but has won 12 of its last 15 games against the neighbors from the north dating back to 1997. Missouri is coming off a 34-win season in 2018 and is entering its third season under head coach Steve Bieser.

Razorbacks vs. Ole Miss – March 29-31
As the SEC Western Division race begins to heat up at the end of March, Arkansas will get a visit from Ole Miss to Baum Stadium. The Rebels, who won the SEC Tournament championship last year, are fresh off a 48-win season and 2019 will mark the 28th all-time series between Arkansas and Ole Miss.

Razorbacks vs. Little Rock – April 2; Arkansas-Pine Bluff – April 16
For the first time in program history, the Razorbacks will play a game against an in-state program when they face off against the Little Rock Trojans on April 2 and the Arkansas-Pine Bluff Golden Lions on April 16. Both are midweek contests and will be played at Baum Stadium. Both Little Rock and UAPB won 20+ games last year and reached their respective conference tournaments. Little Rock head coach Chris Curry is also a former assistant under Dave Van Horn.

Razorbacks vs. Mississippi State – April 19-21
One of two College World Series teams on Arkansas’ schedule, Mississippi State will return to Baum Stadium in late April in what could be a crucial series for the SEC Western Division. The Bulldogs made an impeccable run to the CWS semifinals last year and will be in their first season under new head coach Chris Lemonis. The last time Mississippi State visited Fayetteville, the Razorbacks utilized a three-game sweep to start its SEC season. Arkansas has not lost a series to Mississippi State in Baum Stadium since 2007.

Razorbacks vs. LSU – May 10-12
Arkansas’ final home series for the 2019 season will be against, arguably, it’s biggest rival in LSU. The Tigers won 39 games a year ago and made it to the NCAA Tournament for the seventh-straight year. Head coach Paul Mainieri is going into his 37th season as a college coach and 13th season at LSU.