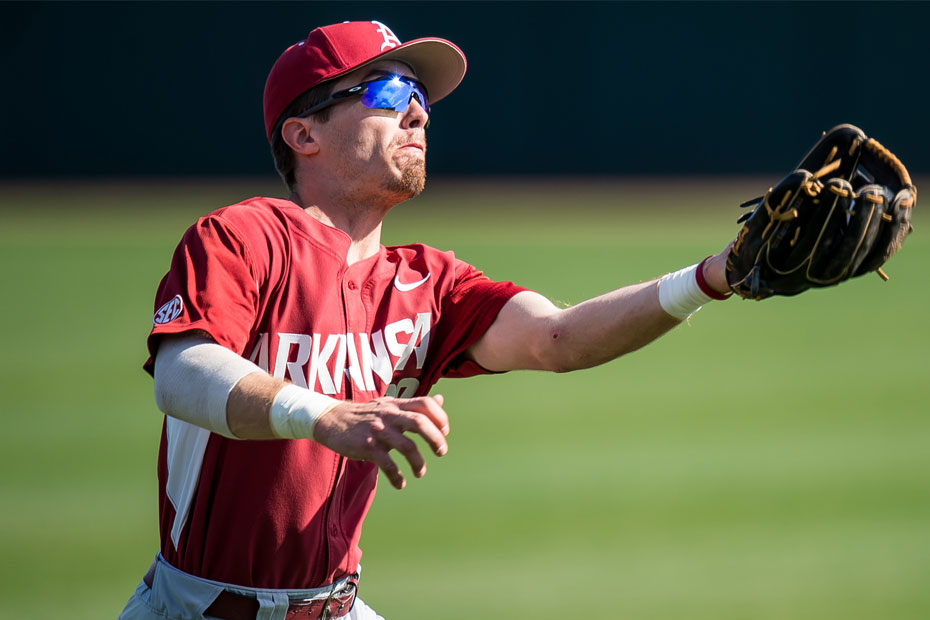 FRISCO, TEXAS – Two early runs were not enough to shake Oklahoma State starting pitcher Jensen Elliott Sunday afternoon, as 20th-ranked Arkansas only managed three hits from the third inning on, falling to No. 14 Oklahoma State, 8-3, on the final day of the Frisco College Classic.

The Hogs benefitted from fielding errors by the Cowboys early to score their first two runs in the game. However, a couple of doubles by Grant Koch and Carson Shaddy to bring home the third run was the only bright spot the rest of the way. Elliott handcuffed the Arkansas hitters all game, throwing six full innings, allowing five hits, one earned run, and striking out six.

Shaddy followed up his monster game from Saturday with a 2-for-3 day at the plate, including the RBI double in the sixth. Over the last five games, Shaddy has hit .467 with seven hits, five for extra bases, nine RBIs, and has walked four times. In the Frisco Classic alone, Shaddy had five hits, four being doubles, and six RBIs as he was named the tournament’s Most Outstanding Player.

Koch, Jake Arledge, and Jax Biggers were the only other Razorbacks to tally hits in the game. Koch has six hits over his last four games with seven RBIs and two home runs. He’s currently batting .370 through 11 games with 10 extra base hits and four home runs, leading all SEC catchers.

Redshirt senior Josh Alberius got the nod for the start on Sunday and was looking to give Arkansas its third straight strong outing by a starting pitcher. Unfortunately, Alberius labored through two innings, giving up five runs on five hits with two walks and two strikeouts.

The pitchers that followed him out of the bullpen did their best to give the offense a chance late in the game. Kevin Kopps, Jake Reindl, Evan Lee, and Cannon Chadwick all combined for just two earned runs and three hits given up through seven innings, but the offense could not string together enough hits to pull even with Oklahoma State.

Along with Shaddy, Koch and Bonfield were named to the Frisco Classic All-Tournament Team. Koch hit .273 over the three-game stretch including a monster grand slam against Nebraska on Saturday, giving him two long balls in his last four games.

Bonfield turned in a strong road trip over the last week, including a four-hit, two-RBI weekend in the Frisco Classic. Going back to the midweek series at Louisiana Tech, the New Jersey native hit .316 over the last five games, which includes two multi-hit games, giving him three for the year. Against Nebraska, Bonfield broke out with his first three-hit game of the year and four runs scored, part of a 15-run outburst by the Arkansas offense.

Up Next
The Razorbacks return home after the five-game road trip to face ULM for a two-game midweek series starting on Tuesday at 3 p.m. at Baum Stadium. Game two between the Hogs and Warhawks will be on Wednesday with first pitch at 3 p.m. Both games will be televised online on SEC Network+ on the WatchESPN app.