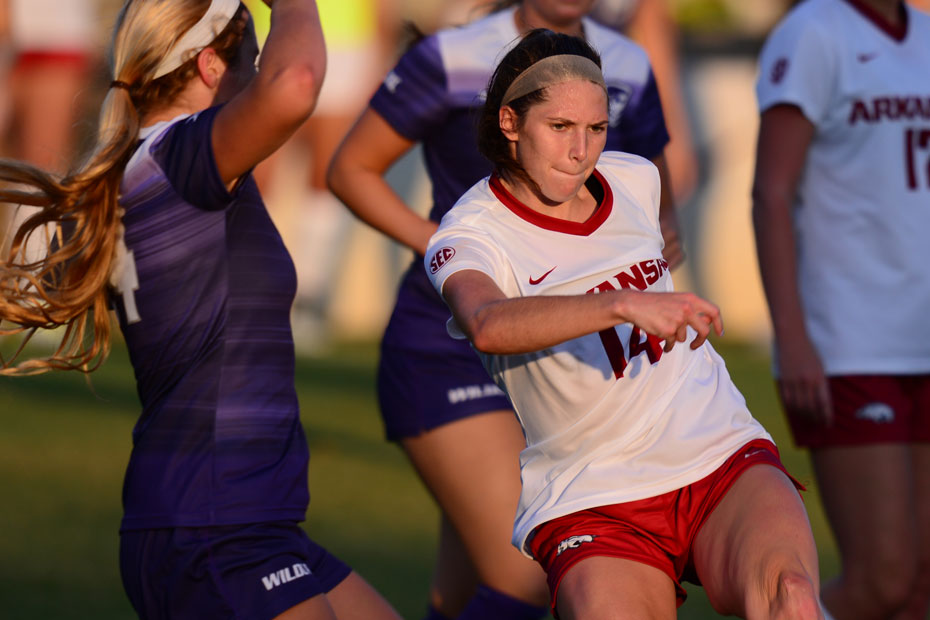 FAYETTEVILLE, Ark. — Sophomore Taylor Malham was the first Razorback to find the back of the net in the 2018 season when her one-timer score led the Arkansas soccer team to a 1-0 victory over Kansas State on Saturday night in exhibition play.

Malham, a sophomore, comes off a stellar freshman campaign where she scored six goals, good for second on the team, and also tallied two assists. Her score on Saturday came in the 37th minute of play after receiving a perfect cross from freshman Maddie Ricketts on the right side.

Arkansas, which started preseason practice three days ago, was able to utilize its full roster throughout the match as 21 different players made it onto the field for at least 16 or more minutes. Sophomore Brooke Pirkle led all players, going a full 90 minutes in the midfield.

Both teams agreed prior to the match to play three 30-minute halves, allowing plenty of rest and rehydration on what ended up being a seasonably warm Arkansas night.

In the net, head coach Colby Hale was able to use goalkeepers Alexis Bach and Taylor Beitz evenly throughout the match. Beitz corralled three saves in 46 minutes, while Bach was faced with two shots, but none found the target.

The Razorback defense helped control the possession for much of the night, limiting Kansas State to only six shots, three coming in the second period. Arkansas also won the corners game, 7-0, helping to create multiple chances in front of goal.

On the offensive end, junior Stefani Doyle led all Razorbacks with four shots in 46 minutes. Six other players also were able to find the shot sheet with Marissa Kinsey, Parker Goins, Caroline Campbell and Malham all finding the target.

Arkansas will get back to practice next week in preparation of their final exhibition of the season set for Thursday, Aug. 9 at Nebraska. The Razorbacks will not open the regular season until Aug. 17 against Duquesne in State College, Pa.

First kick against the Cornhuskers next week is scheduled for 7 p.m.