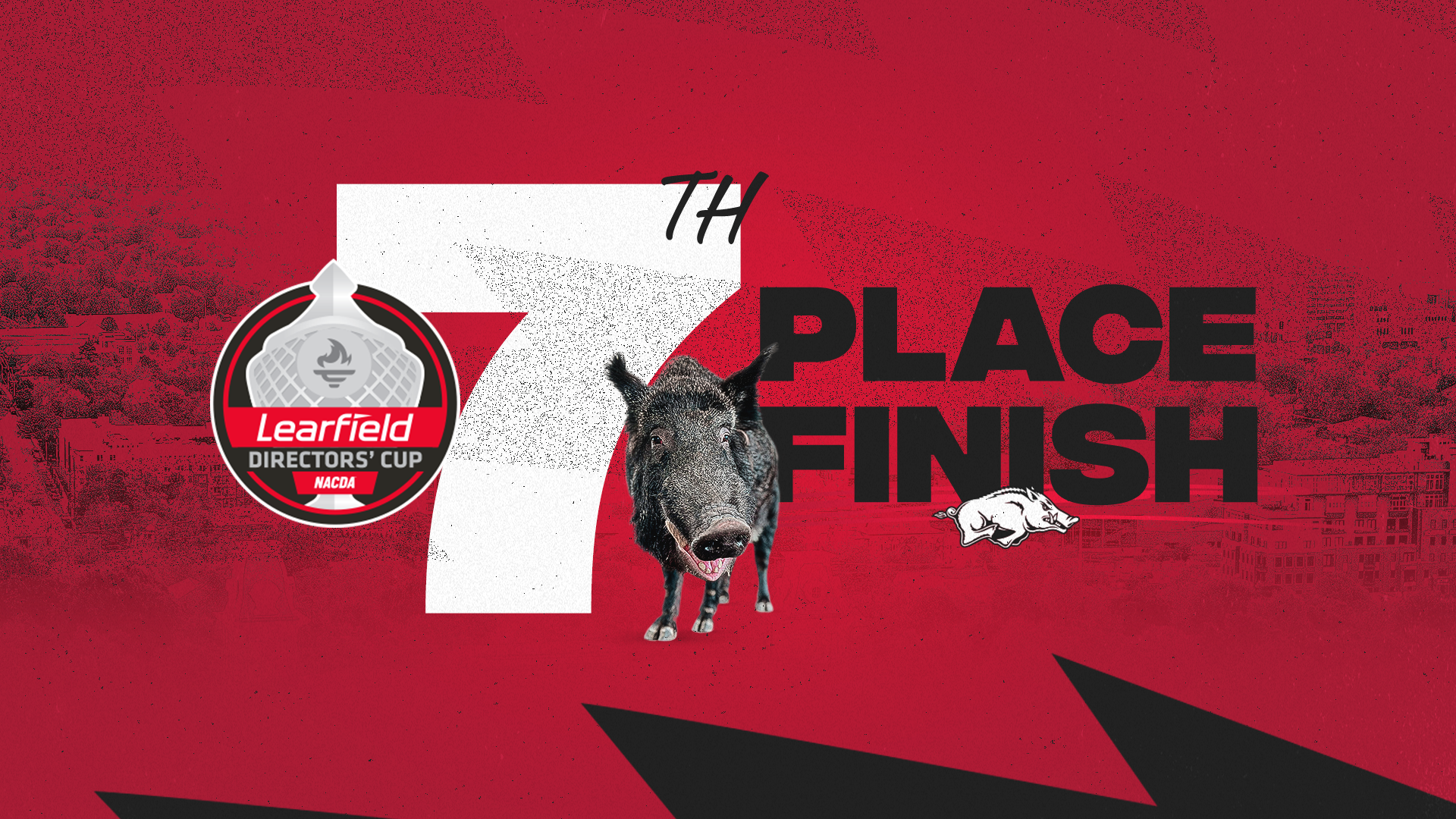 In 2020-21, Razorback Athletics turned in one of the most successful years in school history, including a program-best eighth place finish in the 2020-21 Learfield IMG Directors’ Cup. Arkansas’ previous best finish was 14th. The Directors’ Cup program has been tracking the success of the nation’s top intercollegiate athletics programs since 1993-94.

“After cracking the top-10 in the Directors’ Cup for the first time in program history last year, our program responded with an even better encore, turning in the best collective year ever for Razorback Athletics,” Vice Chancellor and Director of Athletics Hunter Yurachek said. “With nine top-10 NCAA finishes, eight SEC championships and countless additional accomplishments on and off the field in all 19 of our sports, the 2021-22 athletics season will be celebrated by Razorback fans for years to come. I want to thank and congratulate our student-athletes, coaches and staff members for a truly phenomenal year! I am also grateful for the tremendous support of Razorback Foundation members, season ticket holders and fans who make this remarkable success possible. It truly is a great time to be an Arkansas Razorback!”

Arkansas culminated its 2021-22 season with its 11th appearance at the College World Series. The Razorbacks took to the road to win an NCAA Regional in Stillwater, Oklahoma and a NCAA Super Regional in Chapel Hill, North Carolina to earn a berth to the national championship in Omaha, Nebraska. Arkansas finished third at the CWS, falling just one game short of the championship series. The Hogs advanced to the College World Series for the third time in the past four full seasons, earning 83 Directors’ Cup points for the finish.

Razorback softball once again was at the forefront nationally, winning a second-straight SEC regular season championship and then capturing the SEC Tournament for the first time in school history. Coach Courtney Deifel’s squad hosted both a NCAA Regional and Super Regional at Bogle Park. The Hogs finished the season tied ninth nationally. Arkansas earned 64 points for its historic season.

Another Razorbacks women’s squad added a top-10 national finish of its own. Arkansas finished sixth at the NCAA Outdoor Track and Field Championships, giving Coach Lance Harter and his team 73.5 points in the Directors’ Cup standings. The Razorbacks also captured the prestigious Terry Crawford Women’s Division I Program of the Year award, recognizing the nation’s top program in the 2021-22 season based on championship results at the NCAA cross country, indoor and outdoor championships.

Coach Brad McMakin and the Razorback men’s golf team notched a top-10 national finish. Arkansas advanced through the NCAA Regional and finished ninth at the NCAA Men’s Golf Championship in Scottsdale, Arizona. The finish earned 69 Directors’ Cup points and was the best national finish for the program since Arkansas was the national runner-up in 2009.

Arkansas’ women’s golf team also advanced through the regional round to compete at the NCAA Women’s Golf Championship in Scottsdale. Coach Shauna Taylor’s team finished 22nd in the nation and contributed 51.5 points to the Razorbacks’ Directors’ Cup total.

Coach Cristina Sanchez-Quintanar made the most of her first season at the helm of the Arkansas women’s tennis program, leading her squad to a berth in the NCAA Tournament. The Razorbacks earned 25 points for making it to the NCAA Tournament draw.

Arkansas continued its recent momentum in gymnastics. Arkansas advanced to the regional final for a second-consecutive season. The Razorbacks finished second in its session of the NCAA Norman (Oklahoma) Regional and advanced to the Sweet Sixteen. Coach Jordyn Wieber and the GymBacks concluded their team season, just one step shy of advancing to compete for a national championship. Arkansas earned 60.75 points for the NCAA finish.

Coach Eric Musselman and the Razorback men’s basketball team made a deep run into the NCAA Tournament for the second consecutive year. The Razorbacks won three games in the draw, including a win over No.1 Gonzaga in the Sweet Sixteen to advance to the Elite Eight and the West Regional Final. It marked the first time Arkansas has advanced to the Elite Eight in back-to-back seasons since the 1993-94 and 1994-95 campaigns. For its efforts, Arkansas earned 73 Directors’ Cup points.

The Razorbacks continued their tradition of excellence in track and field during the indoor season. Both the men’s and women’s squads won the SEC Indoor Track and Field team titles before advancing to top-10 finishes at the NCAA Indoor Track and Field Championships. Coach Lance Harter led the women’s team to a fourth-place finish at the national meet. The podium finish produced 80 points. Coach Chris Bucknam and the men’s team earned a seventh-place finish to earn 72 points toward the program’s Directors’ Cup point total.

Arkansas made a return trip to the NCAA Women’s Basketball Tournament, after qualifying for the Big Dance in 2020-21 as well. If not for a pandemic shortened 2019-20 campaign, the Razorbacks would have earned three-straight NCAA appearances. Coach Mike Neighbors and the Razorbacks tallied 25 points for earning a berth in the NCAA Tournament field.

Arkansas won its third straight SEC regular season crown, before advancing to the Elite Eight round of the NCAA Women’s Soccer Tournament for the first time. The program record postseason run landed 73 points for the Hogs.

Coach Sam Pittman and the Razorback football team turned in one of the best gridiron seasons in recent history in 2021. Arkansas capped a remarkable 9-4 season with a 24-10 win over Penn State in the Outback Bowl. The Razorbacks earned a final national ranking of No. 20 in the USA Today / AFCA Coaches poll, tallying 54 points in the Directors’ Cup standings.