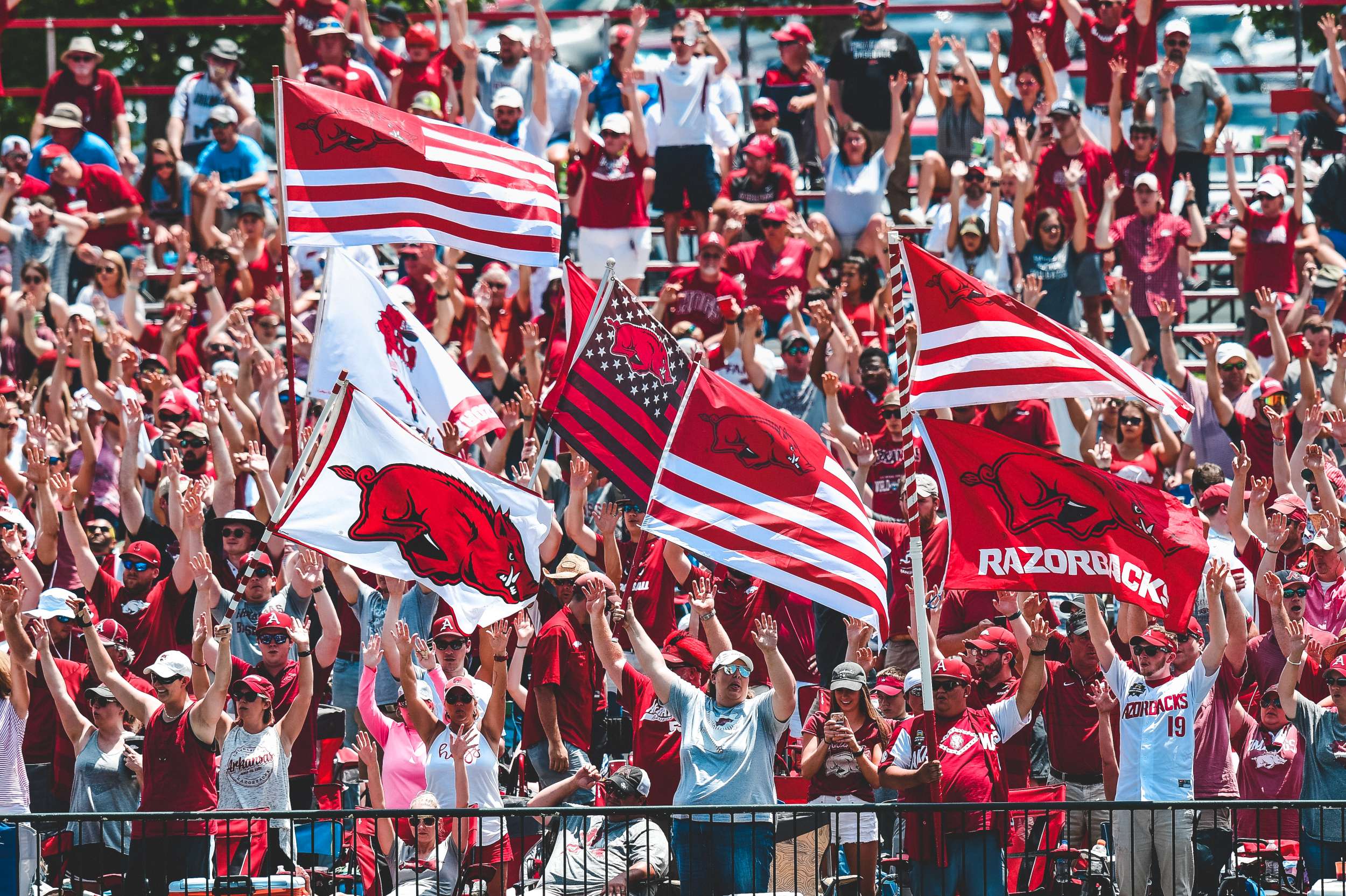 FAYETTEVILLE, Ark. – A national championship in women’s outdoor track and field and a second-consecutive trip to the College World Series in baseball capped a successful year for Razorback Athletics and helped the University of Arkansas to a No. 23 finish in the 2018-19 Learfield IMG College Directors’ Cup. Arkansas earned a spot among the nation’s top intercollegiate athletics programs, finishing with 803 points in the final rankings released on Friday by the National Association of Collegiate Directors of America (NACDA).

A total of 13 Razorback sports scored in this year’s competition resulting in the seventh time Arkansas has scored as many as 800 points in the Directors’ Cup. Arkansas finished in the top 25 for the fifth-consecutive year and the 10th time in the past 12 years. Arkansas finished first in the nation in the rankings among schools with 19 or fewer sports. In fact, Arkansas was the only school with 19 or fewer sports to earn a top 25 finish in the final Directors’ Cup standings.

“Once again, our 465 student-athletes and coaches have combined for a truly memorable year of athletics competition,” Vice Chancellor and Director of Athletics Hunter Yurachek said. “With two NCAA championships, four Southeastern Conference team crowns and countless individual NCAA and SEC individual titles, these remarkable young men and women have succeeded at the highest level athletically while proudly representing the University of Arkansas. As the nation’s top ranked program with 19 or fewer sports, we continue to rank among the nation’s best even while competing against programs with upwards of 30 sport programs. Our sustained success can be attributed to the commitment of our student-athletes, coaches and staff as well as the loyal support of Razorback Foundation members, season-ticket holders and fans throughout Arkansas and around the world.”

Since 1993-94, the Directors’ Cup has tracked the nation’s most successful intercollegiate athletics programs for their on-field performances throughout the year. In the Directors’ Cup, schools may count points in up to 19 sport programs, four of which must be men’s and women’s basketball, volleyball and baseball, allowing programs with additional sports to count only the best team performances.

Arkansas’ spring sports once again vaulted the Razorbacks into the nation’s top 25 in the final Directors’ Cup standings. The Razorbacks earned a total of 370.5 points in the spring sports segment, including 100 points from the women’s track and field team for its national championship.

An exciting finish resulted in the Razorback women’s track and field team winning its fourth NCAA title in school history. Arkansas and Southern Cal were tied in the team standings with 56 points with one event remaining, the 4×400-meter relay, at the NCAA Outdoor Track and Field National Championships in Austin. Arkansas rose to the occasion finishing second in the race to clinch the second NCAA title this year and the fourth national championship in the history of the women’s program. Along the way, Janeek Brown (100-meter hurdles) and Tori Hoggard (pole vault) both earned NCAA individual titles and counted among the 17 total All-America honors earned by the Razorback women’s team.

On the baseball diamond, Arkansas made program history earning a trip to the College World Series in back-to-back seasons. The Razorbacks won a share of the SEC Western Division championship on its way to a No. 5 national seed in the NCAA Tournament. Arkansas swept through its regional at Baum-Walker Stadium before downing SEC rival Ole Miss in an NCAA Super Regional in Fayetteville. The NCAA Super Regional win gave Arkansas its second trip to Omaha in as many seasons and its 10th College World Series appearance overall. Arkansas finished the season with a 46-20 record, earning 73 points for the Directors’ Cup standings.

For the first time in school history, the University of Arkansas played host to the NCAA Men’s and Women’s Golf Championships at the Blessings Golf Club. The Razorback women’s team advanced to the NCAA Championship as a team. Led by NCAA individual stroke play champion Maria Fassi, the Razorbacks advanced to the match play round, before being eliminated. Arkansas earned 72.75 points for its performance in the women’s tournament.

A month after winning its first SEC team title in 24 years, the men’s golf team earned a spot at the NCAA Men’s Golf Regional in Austin, Texas. The Razorbacks finished one spot shy of advancing as a team to the NCAA Championship. Arkansas freshman Julian Perico did advance to the NCAA individual stroke play competition. Arkansas earned 40.5 points for its NCAA Regional finish in men’s golf.

For the third-straight season, the Razorback softball team secured a berth in the NCAA Softball Championship. Arkansas earned the No. 2 seed in the Stillwater (Okla.) Regional. The Razorbacks were eliminated in two games, finishing the season with a record of 38-20. Arkansas earned 25 points for making the NCAA Tournament field.

Arkansas earned a total of 272 points in the winter Directors’ Cup scoring segment. Ranked No. 1 nationally from pre-season to the NCAA Indoor Track and Field Championships, Coach Lance Harter led the Razorback women’s squad to its third NCAA championship in program history and helped secure the 44th NCAA Championship overall in cross country and track and field at the University of Arkansas. Arkansas led the nation with 21 All-Americans, including 18 who earned first-team honors, including back-to-back NCAA Indoor pole vault champion Lexi Jacobus and three-time 2019 Indoor All-American Payton Chadwick. The Razorbacks racked up 100 Directors’ Cup points for winning the national title.

The Arkansas men also turned in a strong performance, earning a Top-15 team finish at the NCAA Indoor Championships at the Birmingham (Alabama) Crossplex. The Razorbacks featured 11 All-Americans, led by Gabe Moore, who finished as the national runner-up in the men’s heptathlon. Arkansas earned 61.5 points for its 13th-place finish in the men’s team standings.

In his final season as head coach, Mark Cook led the Razorback gymnastics team to its 16th-consecutive NCAA Regional appearance. Cook helped form the program beginning in 2001 and coached the GymBacks from 2003-19. Arkansas earned 55.5 points for its final NCAA appearance under Coach Cook.

Coach Neil Harper helped lead the Razorbacks to a 19th-place finish at the NCAA Swimming and Diving Championships, the highest team finish by Arkansas since 1988. It marked only the third top-20 finish in program history. Sophomore Brooke Schultz earned a pair of top-five finishes in diving, including a national runner-up finish in the 3-meter and a fourth-place finish in the one-meter competition. Junior Anna Hopkin broke a school record and finished as the national runner-up in the 100 freestyle while also breaking a school record and placing fifth in the 50 freestyle. Arkansas earned 55 Directors’ Cup points for its top-20 team finish.

Arkansas earned a total of 160.5 Directors’ Cup points from fall sports. The Razorbacks tallied 50 points thanks to another post-season run by the soccer program. Arkansas reached its third-straight SEC Tournament final and earned its third-straight NCAA Tournament appearance under Coach Colby Hale. For the second time in school history, Arkansas hosted an NCAA Tournament match at Razorback Field and advanced to the second round of the draw.

The 2019 cross country season was full of championships for the University of Arkansas. The women’s team won its sixth-straight SEC cross country crown while junior Gilbert Boit won the SEC individual men’s title. After the Arkansas men’s and women’s teams won the NCAA South Central Regional crowns in College Station, Texas, both squads advanced to the NCAA Cross Country Championships in Madison, Wisconsin.

In addition to its success on the field, Razorback Athletics is one of approximately 20 financially self-sustaining athletics programs in the nation and does not receive state funding or a student fee. Razorback Athletics contributes more than $3.5 million a year to the institution to support academic programs and other initiatives benefitting University of Arkansas students.