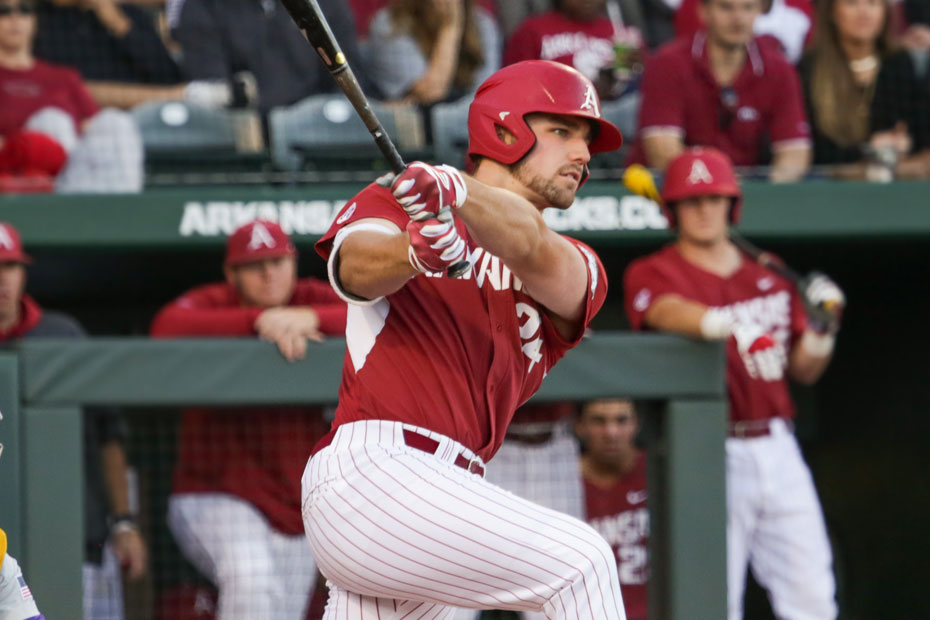 FAYETTEVILLE, Ark. – The 14th-ranked Arkansas baseball team suffered a tough late-inning loss to No. 13 LSU Saturday night, as the Tigers scored five runs in the top of the ninth to come back and beat the Razorbacks, 10-8. inside Baum Stadium. The loss forces Arkansas to its third-straight rubber match in as many weeks with first pitch on Sunday set for 1 p.m.

On the mound, junior pitcher Trevor Stephan held the Tigers to just two runs over seven innings, his longest outing of the conference season. LSU scattered five hits in those first seven innings and Stephan retired 13 of the last 15 batters he faced after giving up a home run in the second inning to Jordan Romero.

The Razorback lineup hit multiple home runs, once again, one each from junior Chad Spanberger and sophomore Grant Koch. It is the 13th multi-home run game of the season for Arkansas and second of the series.

Seven different Razorbacks notched at least one hit in the game. Sophomore Jax Biggers and Spanberger led the way with three hits each, both going 3-for-4 with two runs scored. For Biggers, it was his third three-hit game of the season.

Spanberger led all Razorbacks with five RBIs, the third Razorback to have five in a game this season and the most in a conference game since Brian Anderson had five against Missouri in 2014.  Spanberger hit his second home run of the series in the bottom of the second inning, a three-run shot that put Arkansas up 5-1. The long ball gives him six for the season, matching his total from a year ago.

Koch also got in on the home run action, smacking his ninth of the year in the third inning, which continues to lead the team. It was Koch’s only hit, but he had three walks on a 1-for-2 night at the plate. As a team, Arkansas walked a season high 10 times.

Sophomore Eric Cole had two hits for the second consecutive night, after going 2-for-5 including a big double in the bottom of the ninth that nearly got a rally going for the Razorbacks. Cole is now 4-for-10 on the weekend against LSU with three runs and two RBIs.

Razorback Quotables
“We have escaped a couple of these the last few weekends. We didn’t escape tonight, so we just need to learn from it and move on. It’s baseball, you have to have a short memory and move on.” – Head coach Dave Van Horn on the loss

“Number one, he is confident. He’s not trying to pull the ball. He is using the whole field. Last night, his home run was almost to dead center. He’s hit home runs and base hits to left. I think the main thing for him, is getting at-bats and getting confidence.” Head coach Dave Van Horn on Chad Spanberger

“Just that he loves this team. That it is just one game. It clicked with all of us, it’s just one game. It’s all about tomorrow right now. We’ve got a good group here and we’ll respond.” – Grant Koch on what head coach Dave Van Horn’s message was to the team after the game

Up Next
The Razorbacks and Tigers will play the deciding game of the series Sunday afternoon at Baum Stadium with first pitch set for 1 p.m. The game will be broadcast on SEC Network+ and can be heard in its entirety on the Razorback Sports Network on the radio.