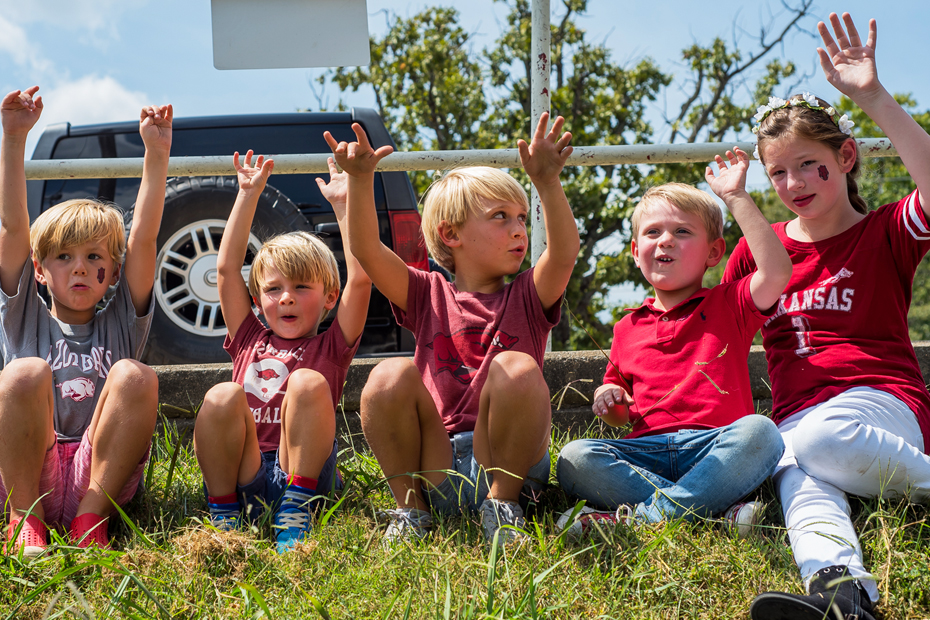 FAYETTEVILLE, Ark. – With this fall kicking off the celebration of 150 years of the rich history and tradition of college football, Arkansas encourages fans everywhere to show that their college colors never fade by wearing their favorite Arkansas gear during our ONE Hog Call on College Colors Day, which takes place on Friday, August 30.

The 15th annual College Colors Day is a national holiday that gives Razorback fans across the country the opportunity to showcase their spirit by wearing Arkansas Cardinal and White and then sharing their pride on social media using the hashtag #CollegeColorsDay.

Arkansas Razorback fans are invited to stand up as ONE fan base and Call the Hogs in the second annual ONE Hog Call at 1 p.m. CDT on Friday, August 30. Free public events will be held in Fayetteville and Little Rock where fans across the state can rally and call the Hogs in unison as ONE Razorback. Fans are also encouraged to organize group gatherings wherever they are in the world to participate in the coordinated Hog Call.

Fans in Northwest Arkansas are invited to the Fayetteville Town Center Plaza located at 15 West Mountain Street to Call the Hogs with fellow Razorbacks. University of Arkansas students, faculty and staff are invited to gather at the Greek Theatre, for an on-campus ONE Hog Call event. Razorback coaches, mascots and members of the Razorback spirit squads will be in attendance. Both Fayetteville events will begin at 12:30 p.m.

Little Rock activities will be held on the field at War Memorial Stadium located at 1 Stadium Drive beginning at 12:30 p.m. the same day. Arkansas coaches and former Razorback student-athletes will be on hand to greet fans. Additional details on all three public events will be announced in the coming weeks.

“Last August, fans from all over the world – in 40-plus U.S. states, 16 foreign countries and beyond – dropped what they were doing and called the Hogs in unison to kick off the new year and show support for all Razorback student-athletes,” Vice Chancellor and Director of Athletics Hunter Yurachek said. “The event marked the most widespread, simultaneous Hog Call in history. As we look forward to the second annual ONE Hog Call event, I invite Arkansans and Razorback fans everywhere to once again come together in support of our student-athletes and to celebrate one of the most unique and passionate traditions in college sports.”

All fans are encouraged to post photos and videos of their Hog Call on social media using #ONEHogCall. Some of the best submissions will be featured on Razorback social channels and videoboards in Donald W. Reynolds Razorback Stadium during Arkansas’s 2019 football season opener against Portland State on Saturday, August 31.

Last year’s inaugural ONE Hog Call event generated support from around the world, including from 40 states, 16 countries, 62 schools and 65 Arkansas businesses.

College Colors Day was created by CLC, the University’s licensing partner, to provide a unified spirit day for college fans and supporters. This year’s holiday honors the kick-off of the football season with a partnership with College Football 150th Anniversary. Beyond showing their fandom on social media, fans can also visit www.CollegeColorsDay.com to enter for the chance to win a variety of prizes, including two tickets and a trip to the national championship game in New Orleans thanks to CLC’s partnership with the College Football Playoff (CFP), and its charitable arm, Extra Yard for Teachers.

Whether going to work, Arkansas, or just spending time with friends, Arkansas fans are encouraged to share their Arkansas spirit by wearing their colors on College Colors Day.