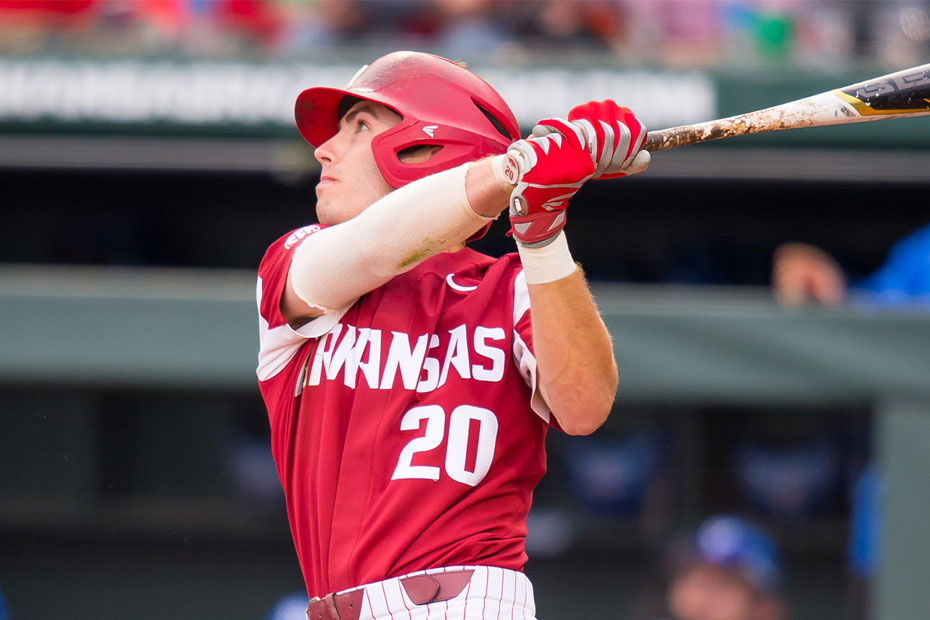 Arkansas Grinds Out Game One Win Over Ole Miss

OXFORD, Miss. – It was a back and forth battle between No. 5 Arkansas and No. 4 Ole Miss Thursday night at Swayze Field, but the Razorbacks were able to get two big runs in the sixth inning to break a 4-4 tie and beat the Rebels, 6-4, for their fifth conference win of the year.

Arkansas (19-7, 5-2 SEC), with the win, claims its fifth victory over a top-five team, and has yet to lose the first game of a weekend series this year. The win over Ole Miss (23-4, 4-3 SEC) also allows the Hogs take over sole possession of first place in the SEC Western Division.

Sophomore Jordan McFarland provided the big swing to break the tie in the sixth, hitting his third home run of the year to right-centerfield, one of two long balls hit in the game by Arkansas. McFarland was one of five Razorbacks to turn in a multi-hit performance. Joining him were Jax Biggers, Eric Cole, Casey Martin, and Carson Shaddy.

Shaddy came away as the Hogs’ top hitter, going 3-for-4 with two runs scored, two RBIs, and a two-run home run, tying him for the team lead with seven on the year.

Knight was spotted four runs after two innings, but Ole Miss scored four right back, two of them unearned after an error to tie the game after three innings. Knight was able to settle back down and throw scoreless fourth, fifth, and sixth innings to notch his fifth quality start this season.

The Hitting
Arkansas got production up and down its lineup, especially in the eight and nine spots where McFarland and Shaddy combined to go 5-for-8 (.625) with two home runs, driving in half of the Razorbacks run total on Friday night.

Shaddy’s long ball came in the second inning after Arkansas had already scored two runs in the first off Ryan Rolison. His seventh home run of the year extended his hitting streak to five games and was his first round tripper since his two homer game against Kentucky on March 17.

In conference play, Shaddy has been one of the Hogs’ most consistent hitters. The Fayetteville native is leading the team with a .520 average after seven SEC games and completes the slash line with a 1.000 slugging percentage and a .567 on-base percentage. Over his last nine games, Shaddy has five multi-hit games with 12 runs driven in and a .486 average (17-for-35).

The top of Arkansas’ lineup was strong too as the first three hitters (Biggers, Cole, Martin) all finished with two hits each. Catcher Grant Koch was the only starter to not record a hit in the game as the team finished with 14 hits, its most in its last six games.

The Pitching
Knight had trouble locating his fastball early on as he gave up a solo home run to Cole Zabowski in the second inning. He wasn’t out of the woods in the third inning, either, as Ole Miss scored three more runs on four hits, including one coming off a throwing error from a sacrifice bunt attempt.

Knight picked up two strikeouts in the third and was able to prevent the Rebels from taking the lead. Upon coming back for the fourth inning, Knight proceeded to allow only three base runners for the rest of his outing and got some help from his defense, which turned double plays in the fourth and sixth innings.

Sophomore Matt Cronin finished the final three innings of the game, striking out five batters, to earn his team-leading fifth save of the year. He struck out the side in the eighth and two of the final three batters in the ninth to lock up the victory. It’s the second time this year that Cronin has totaled five strikeouts and he has four saves in his last five outings.

Up Next
Game two between the Razorbacks and the Rebels is set for Friday back at Swayze Field with first pitch at 6:30 p.m. The game will be televised online on SEC Network+.