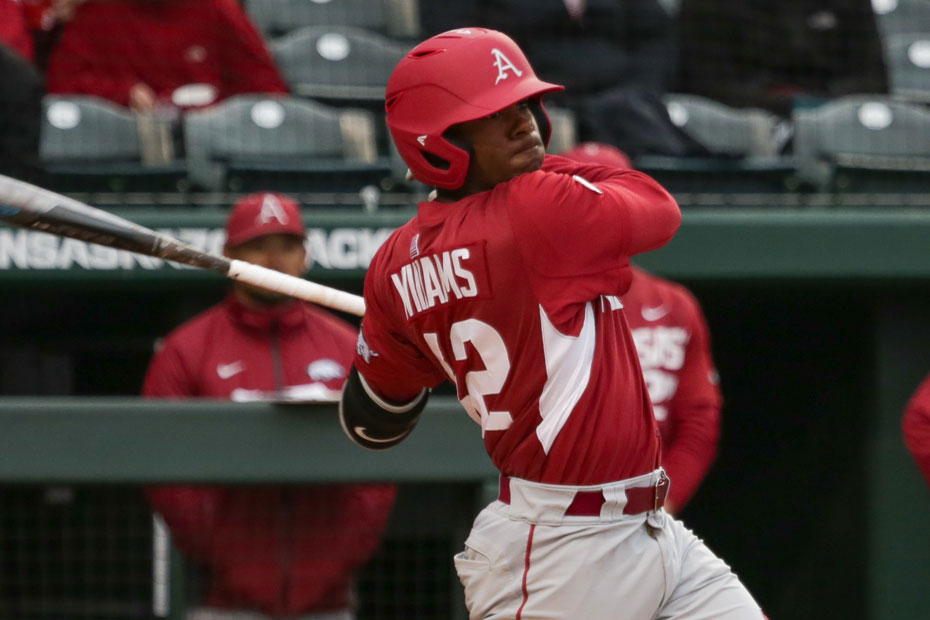 FAYETTEVILLE, Ark. – Arkansas used three five-run innings Sunday afternoon to come back from a four-run deficit and defeat Bryant, 16-6, inside Baum Stadium and secure its second consecutive weekend sweep to begin the season.

The Hogs (6-0) found themselves down for the second straight game when Bryant (2-5) got to starter Kevin Kopps early and plated five runs off him and first reliever Barrett Loseke. With the Bulldogs leading 5-1, the Hog bats went to work and scored in the bottom of the sixth including a go-ahead two-run home run by Jake Arledge, his second long ball in as many days.

Arkansas didn’t look back from there, scoring five seventh and eighth innings, while taking advantage of five Bulldog errors in the final three innings. Bryant struggled defensively all weekend, committing 14 errors leading to 14 unearned runs for the Razorbacks.

Sophomore catcher Grant Koch went 4-for-6 at the plate, bringing his weekend hit total to seven in 15 at-bats. Koch’s weekend featured one home run, four RBIs and three runs scored. The Fayetteville native is now 10-for-24 (.407) on the year after being 5-for-13 (.385) at this point a year ago.

Eight Razorbacks had at least one hit in Sunday’s game and seven players scored at least one run. Arledge, Koch, Dominic Fletcher, and Jax Biggers all scored twice. Freshman Jaxon Williams pinch hit for Hunter Wilson in the sixth inning and ended up going 2-for-2 with five RBIs.

Moments That Mattered
Bryant jumped out to a 1-0 lead in the second inning after a solo home run by Jimmy Titus, but the Razorbacks bounced back to tie the game in the bottom of the inning with an RBI single from Wilson. It was Wilson’s only hit of the game, but gives him four RBIs through the season’s first six games.

After Bryant responded with a run in the third, Arkansas had several chances to retake the lead in the middle innings. The Razorbacks left runners stranded on third twice, including in the fifth when junior Luke Bonfield hit a would-be single up the middle, but the ball was snagged by the pitcher for the final out of the inning.

Bryant extended their lead to 5-1 with a two-run home run and an RBI single in the sixth inning, but the Hogs rebounded with a big inning of their own. A Bryant throwing error with two outs allowed Biggers to reach first and Arkansas followed with five runs, capped by Arledge’s two run bomb over the left field wall to take a 6-5 lead going into the seventh.

Bryant again tied the game in the top of the seventh, but the Hogs came back again to load the bases before getting an RBI fielder’s choice by Jordan McFarland and a sacrifice fly by Williams to go back up 7-6.

Williams, who has been a sparkplug off the bench for Arkansas, came through big again when he pinch hit for Wilson in the sixth inning with two on. His single through the right side scored two to cut the lead to one and was followed by Arledge’s big fly. Williams ended up with five RBIs in the game, totaling the first five RBI game by a Razorback since Rick Nomura last season against Gonzaga on March 9.

Williams has only made one start this year, but is 4-for-7 (.571) at the plate and tying for the team lead with nine RBIs.

Razorback Quotables
“I’ll tell you, we knew he was a good player when we recruited him. I think he’s done a tremendous job of making adjustments. When he first got here, he was trying to hit the ball out of the park. Sometimes you just have to be who you are, and sometimes that is a guy who hits line drives up the middle. He has a great approach to the plate and another key to his success is that he’s not swinging at bad pitches. He’s ahead in that count and they’re having to come at him a little bit and he’s made him pay for it. He’s done a tremendous job driving in runs.” – Head coach Dave Van Horn on Jaxon Williams’ early season success

“They weren’t quitting. This year is a little different makeup. Guys I pinch hit for, they didn’t complain. They’re pulling for their team. We didn’t expect five runs, we just needed a couple. It was a feeling of, ‘we can still turn it around.’” – Head coach Dave Van Horn on coming back from a four-run deficit

“Guys keep getting on base and it’s my job to bring them in. If the opportunity is there I want to keep driving in guys.” – Jaxon Williams on his performance at the plate this season

“We feel good. Like always, we’ve got a lot to work on. It’s a lot like last year and we just have to get momentum for the next game. We just need to keep improving every day, because you never know how the season can go.” – Grant Koch on the team’s 6-0 start

Up Next
Arkansas travels to Ruston, Louisiana for their first road trip of the year, a two-game midweek series against Louisiana Tech. First pitch Tuesday will be at 6 p.m., followed by game two on Wednesday at 3 p.m. Both games will be televised on CST.