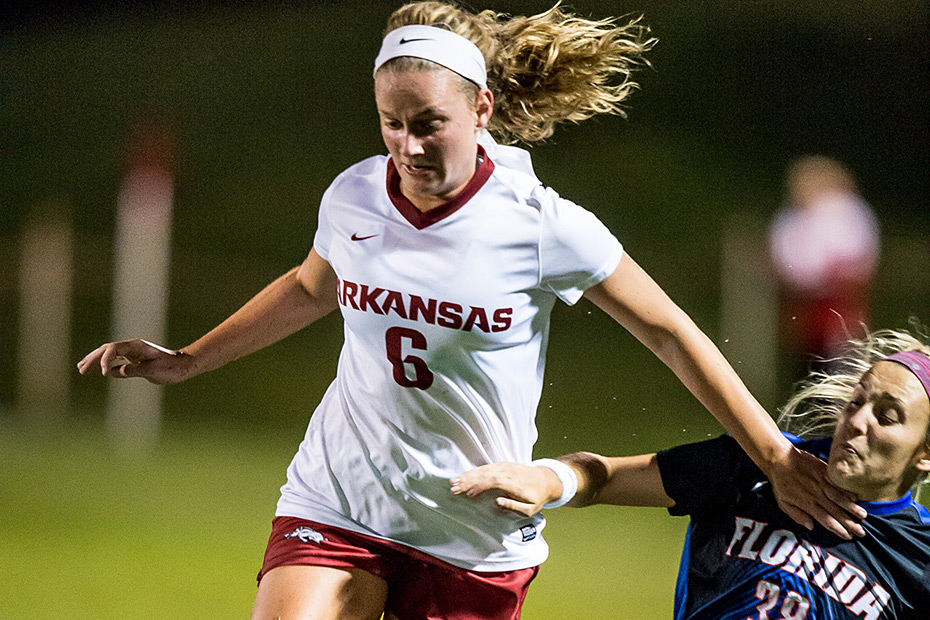 ORANGE BEACH, Ala. – After surpassing several program milestones, setting new records and climbing to unprecedented heights, the Arkansas soccer team has arrived at a destination it has not reached since 1996: The SEC Tournament championship game.

Arkansas and Florida faced off earlier this year on Sept. 16 and the Razorbacks upset the then-No. 4-ranked Gators 2-1 at home – the program’s first win over Florida in more than two decades. The two teams also met in the 1996 SEC Tournament championship game – Arkansas’ last appearance in the finals prior to this season.

The Razorbacks’ path to the championship game involved overcoming Vanderbilt and Auburn in the quarterfinal and semifinal rounds, respectively. The Commodores were shutout 1-0 on Wednesday, Nov. 2 and the Tigers were overcome 3-1 on Friday, Nov. 4.

Fans can follow the action live on ESPNU at 3 p.m. CT as well as the WatchESPN app available on smartphones, tablets, laptops and streaming devices.

• Senior Lindsey Mayo and freshman Kayla McKeon each lead the Razorbacks with nine goals scored on the year. Senior Claire Kelley is in second place with eight goals. All three players have each scored a goal in the conference tournament

• Goalkeeper Cameron Carter’s 1.06 goals against average is a career-best mark for the senior, along with her 17 wins

• During the Sept. 16 Florida-Arkansas match, Carter’s eight saves was a season-high effort for the Waco, Texas, native

• Arkansas is nationally ranked in the top 25 in the following statistical categories: 23rd in scoring offense, 16th in won-lost-tied percentage, 20th in points per game, 11th in total assists, 12th in total goals, 15th in total points and 24th in shots per game