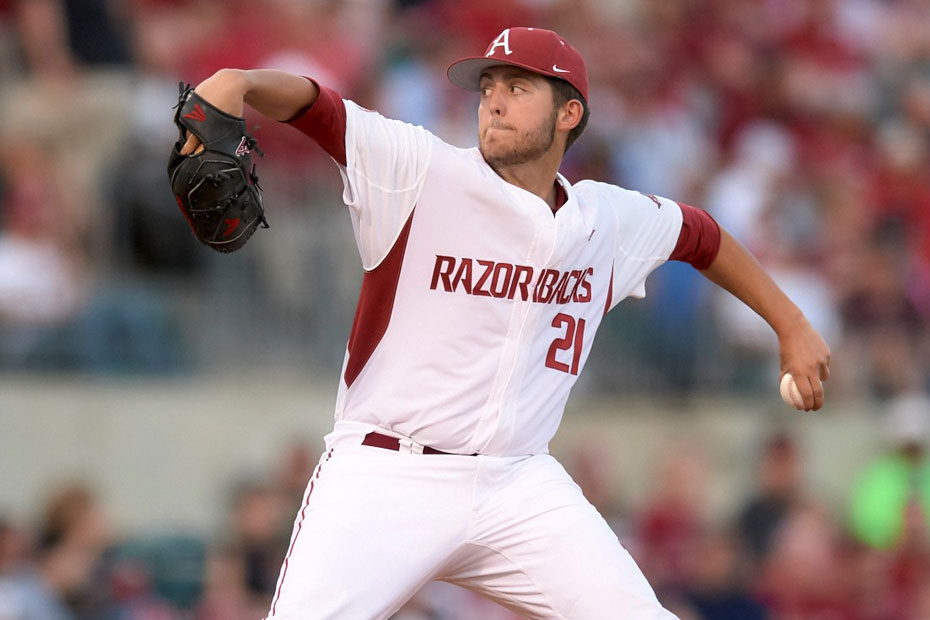 FAYETTEVILLE, Ark. – A two-run blast by Chad Spanberger and a stellar start by sophomore Kacey Murphy on the mound led the 14th-ranked Razorback baseball team to a 2-0 victory over Memphis Wednesday night at Dickey-Stephens Park in North Little Rock, Arkansas.

One night after plating 16 runs against the Tigers, the Razorbacks only needed the two off Spanberger’s fifth inning home run to finish the midweek sweep in front of 8.974 fans. Six hits were totaled in the game by the Hogs, two each by Spanberger and sophomore Jax Biggers.

The win ups Arkansas’ record to 31-8 for the season, and drops Memphis to 21-17. It’s the sixth win in a row for the Hogs as they go into their weekend series at Auburn and 11th-straight during midweek games.

Spanberger extended his career-long hitting streak to 12 games with the two-hit performance, the second-longest streak on the team this season. The home run was his ninth of the year, tying catcher Grant Koch for the team lead.

On the flip side, Murphy held Memphis hitless until the seventh inning and only walked one batter in the fourth. The lone hit came on a bunt single by Chris Carrier with one out, but he was picked off in the next at-bat to complete the seventh scoreless frame for Murphy.

Murphy finished with seven innings pitched and seven strikeouts. The inning total is a career-high and the strikeouts are the third most in a game this year.

Redshirt senior Josh Alberius came in to pitch the eighth and ninth innings, needing only 15 pitches to get the final six outs and his second save of the year.

The combined one-hitter is the first for a Razorback team since Colin Poche’ and Cade Lynch achieved the feat over seven innings against New Orleans on February 19, 2013.

Moments That Mattered
Murphy retired the first 11 batters he faced before giving up a walk to Carrier in the fourth inning. During those first 3.2 innings, Murphy had already recorded four strikeouts and just three balls hit to the outfield.

In the bottom half of the first and second innings, Arkansas stranded two runners on base each time, just missing the timely hit needed to take the early lead. Spanberger got his first hit of the night on a single to right field in the first inning, extending his hit streak, and then reached second on a Jared Gates hit by pitch. However, the Hogs couldn’t punch in the run.

Three more innings rolled by with only three runners reaching base combined between the two teams. Arkansas finally got what it needed with a lead-off single by Biggers in the fifth, his second hit of the night. Two batters later, Spanberger hit one of the longer home runs of the year into the right field berm of Dickey-Stephens Park, giving the Hogs the 2-0 lead and sending the fans into a frenzy.

Neither team make a change on the mound until the seventh when Memphis brought in Blake Bennett to replace starter Alex Hicks. Hicks finished with six innings pitched and six hits scattered to go along with the two earned runs off the homer. Even after getting to the Tiger bullpen, Arkansas did not manage a hit over the final two innings.

Murphy did have a no-hitter into the seventh inning and got the first out of the frame by striking out Brandon Grudzielanek. Unfortunately, Carrier, who he had walked earlier in the game, reached base for a second time on a well-placed bunt to the right of the bullpen and beat out the throw from Gates for Memphis’ first hit.

Once Alberius entered the game in the eighth, the Little Rock, Arkansas native made quick work of the Tigers and struck out the final batter to end the game.

Razorback Quotables
“For a midweek ballgame and have (Kacey) Murphy come out and give us seven strong innings, it kept us in the ballgame against one of their better pitchers. He gave us a chance to win and we had enough offense to win the game. I think Murphy gained a lot of experience and confidence with this. Overall, it was a good night for us.” – Head coach Dave Van Horn on the pitching performance from Kacey Murphy

“We couldn’t tell where it ended up, I just knew when it left the bat, I said ‘It’s 2-0.’ I didn’t even watch it. When (Chad Spanberger) hits them, they usually go a long way. When he mishits them, sometimes they have a chance to get out. That was a big swing for us.” – Head coach Dave Van Horn on Chad Spanberger’s home run

“You never really expect something like that. Coach (Wes) Johnson has us execute one pitch at a time and that’s what happened.” – Kacey Murphy on his outing

Up Next
Arkansas heads to Auburn, Alabama to face a top-10 Auburn Tiger team for a three-game series starting on Friday at 6 p.m. The series will run through Saturday and Sunday with game times slated for 1 and 3 p.m., respectively. Sunday’s game is scheduled to be broadcast on the SEC Network.